You are at:Home»Fixed Income Channel»Bonds Are Surpassing Gold as Preferred Safe Haven Asset 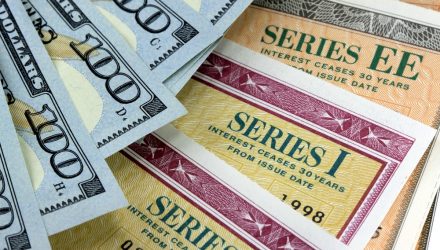 While equities have been heading downwards, it’s not gold that investors have been flocking to as of late. Bonds have been the preferred safe haven asset thus far this year.

Even as the 60-40 stock-bond portfolio split is coming out of favor with advisors, it doesn’t mean that bonds have fallen to the wayside completely. When market turbulence like inflation fears and rising COVID cases have racked the markets, bonds have been the go-to asset.

“Bonds are winning over gold in a battle for investors’ favored haven ahead of the annual Jackson Hole symposium, according to Bank of America Corp,” a Bloomberg article said, noting that inflows have been stellar over the past couple of months.

“Fixed-income funds attracted $13.3 billion in inflows, the most in seven weeks, according to a BofA note citing EPFR Global data for the week through Wednesday (August 25),” the report added. “The reallocations were skewed toward investment-grade debt and Treasuries, with high-yield and emerging-market bonds seeing outflows. Precious metals including gold, on the other hand, had the largest outflow since March at $1.4 billion.”

It appears that investors have been shifting their bond allocations in anticipation of future moves by the Federal Reserve. In particular, a bond-tapering move by the Fed could come as a result of a growing economy.

However, investors seem to be forecasting a slow and steady tapering as opposed to a sudden bond sell-off by the Fed.

“The flows come as yields on high-quality debt rebounded from a six-month low seen earlier in August, according to the Bloomberg Indices Global Aggregate index,” the Bloomberg article said further. “The data suggest investors are confident a rapid and sudden selloff will be avoided after Jackson Hole, where Chair Jerome Powell is expected to reiterate the likelihood of the central bank tapering its $120-billion-a-month bond program by year-end.”

What ETFs Can Investors Use?

To capture the move, investors can opt for total bond exposure via funds like the Vanguard Total Bond Market Index Fund ETF Shares (BND). BND tracks the Bloomberg U.S. Aggregate Float Adjusted Index, which represents a wide spectrum of public, investment-grade, taxable, fixed income securities in the United States, including government, corporate, and international dollar-denominated bonds, as well as mortgage-backed and asset-backed securities, all with maturities of more than one year.

Bond investors can use BND as a traditional hedging component when the equities market goes awry. Short-term traders can also use the ETF given its dynamic ability to be bought and sold quickly in the open market.