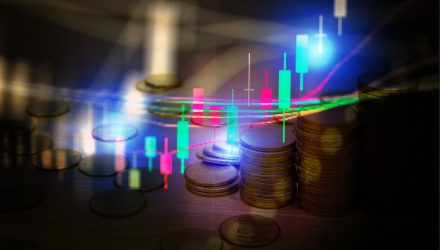 Fixed income exchange traded funds experienced their first monthly outflows in more than five years over January, excluding a one-off instance at the start of the pandemic.

Investors dumped $1.5 billion in global fixed income ETFs over January, compared to the $27.3 billion in inflows over December, the Financial Times reports.

Bond investors are scrambling to reposition their fixed income portfolios ahead of a more hawkish Federal Reserve monetary policy outlook, with multiple interest rate hikes for 2022 amid a surge in inflation.

Beyond the outflows at the height of the COVID-19 pandemic-induced crash in March 2020 that was fully resolved a month later, January 2022 was the first monthly outflow since the $800 million in outflows over November 2016 after Donald Trump’s presidential election victory triggered a surge in U.S. Treasury yields on expectations of higher inflation in response to greater government spending and tax cuts.

The recent selling “is not completely unexpected because of the volatility we have seen with the repricing in the rates market in both the US and Europe,” Karim Chedid, head of investment strategy for BlackRock’s iShares arm in the EMEA region, told the Financial Times.

Most of the selling was from a record $7.6 billion in redemptions among U.S.-listed high-yield, speculative-grade bond ETFs.

“While they still look interesting from the point of view of inflation hedging, they still have duration exposure. Just as we have seen selling from duration in the nominal bonds market, we also see that in inflation-linked,” Chedid added.

Kashner, though, was surprised that investors yanked $200 million from investment-grade bond ETFs.

“What’s more interesting is the slackening of the pace of inflows to the broad-based investment-grade bond funds that serve as core holdings,” Kashner said, highlighting the iShares Core US Aggregate Bond Fund (AGG) and the Vanguard Total Bond Market ETF (BND).

“Had core fixed income flows held steady, we might well have seen positive fixed income flows overall in January. The likeliest explanation is portfolio rebalancing, as the pullback in equities drove equity allocations below target for strategic portfolios,” Kashner added.