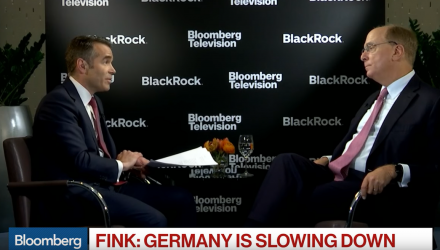 Let’s start big picture right. Iran the world’s largest asset manager you meet continually with heads of state and central banks. You have your finger. I think it’s fair to say on the pulse of the global economy Larry are you optimistic or pessimistic right now.

I would say relative to the mood of the markets. I’m probably a little more optimistic. Why. Because I don’t think the world is that bad. I mean it’s not as good as we thought when we entered 2018 and we had a huge rally in the first quarter then throughout 18 we know the market started falling and dissipated and then we had a real crescendo the fourth quarter and we saw real capitulation by so many investors pulling out. Well since then we’ve seen a lot of investors realize it’s not so bad. And we’ve seen almost. The total opposite of the fourth quarter the fourth quarter you couldn’t find a bid to sell anything in the first quarter. You can’t fight an offer to buy anything. And that just tells you the. I would say that tension of the marketplace. But let’s review of the world. OK. China is slowing it slowly to 6 percent. That’s not so bad. That’s what they say. OK. 5. I mean actually the cities are still growing quite nicely out of region. China has experienced the same two Phase Two you know two type of economies where one part of the economy is growing very well one slowing down. And so they’re going to experience the same type of you know maybe populism unrest issues there in the future. That’s another. Story. Japan is growing at 1 percent. Southeast Asia is actually growing quite nicely. You’re seeing supply chains moving from China into the Southeast Asia Region.

You have Europe which compared to where we were January or March of 2018 is. We were much more pessimistic. I’m very worried about Europe. That doesn’t mean Europe’s going to be into a recession in 2008 19. But it’s not gonna. Be you know maybe just maybe it’s a 1 percent growth probably blowsy to zero and the U.S. we had the sugar high. Tax reforms and we all anticipated that the economy will slow down after the sugar high. And that’s what’s happening. But where’s the U.S. economy this year 2 5 2 6 2 7. It’s not so bad. Consumer confidence is still good. And so I would almost call this a Goldie locks moment where it’s not so bad it’s not so good central bank behaviors are probably more on the dove. Size now from where they were in the fourth quarter. So I would say it’s a time for investors to be a little more relaxed. I don’t think we’re going to go. Much higher than. Today and you mean stock prices but we’re. Fine. What I worry about still is rising populism. Which in what we are witnessing from rising populism. To shorter term behaviors by governments. And you know I talk quite a bit about long term behaviors. You do. And. It’s harder and harder when U.S. governments are. Becoming more and more short term get back to China for a minute. We debate where the economy’s going. But it is fair to say the Chinese leaders are focused. Still on the long term. I know.

Hate the echo chamber right. You hate it when there’s too much consensus. You hate. When people talk about the same thing incessantly. We could throw Brexit in a number of other things are into that camp. So what I’d like to know is in your opinion. Survey the landscape as you were just doing what our people talk. About enough whether they want to say people I’m talking about invest. In talking about corporate leaders I’m talking about policy makers not talking about.

Yes. Well let me just step back for a second. I love that people talk about all of. That. So the reality is when I hear all this noise and can. Be shown that actually makes me more relaxed. The fact this is the power of the press so Erick. When it’s constantly discussed and maybe over discuss we find ways about. It. That’s why when I read it and listen to. This hysteria the hysteria actually does a. Job of mitigating the problem. OK. And this is one. Self-correcting mechanism. It is a self-correcting mechanism. So what I spend. My time on are what questions Am I not being asked what I am. Listening to what am I not reading about. And I would say. The biggest issue because it’s you know it is still retire. But that’s a much longer term issue. But the biggest issue perhaps. In immediate period of time is. You know the U.S. deficits and the supply of U.S. Treasuries. Now as I said you can’t find any offers right now so it’s not up. Today but we are having a deficit. As large as a trillion dollars as far as we could see. You had the MSCI and the Bloomberg index is now.