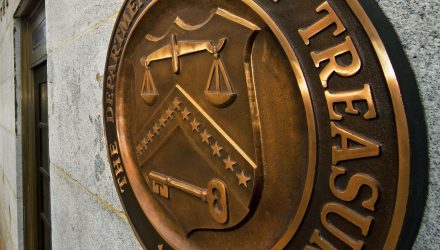 The benchmark 10-year Treasury yield ticked lower to 2.70 as news flooded the capital markets that the U.S. trade deficit fell to a five-month low.

After five straight months of increases, the U.S. trade deficit fell with its global partners for the first time during the month of November–a major win for U.S. President Donald Trump who instituted tariffs in 2018 to help close the gap.

On Wednesday, government data released showed the gap closed to $49.3 billion from $55.7 billion in October–an 11.5 percent decline. Economists surveyed by Dow Jones were forecasting a deficit of $54.3 billion.

“I can say two things about trade. One, the numbers are likely to continue to exhibit elevated volatility from month to month as shippers grapple with heightened policy-related uncertainty. and two, today’s data will boost estimates of Q4 GDP growth,” said Stephen Stanley, chief economist of Amherst Pierpont Securities.

Trade Deal Will Have Muted Impact

The hope for the capital markets, of course, is that a trade deal will materialize between the two largest economies. The United States has already slapped tariffs on$250 billion worth of Chinese products, including further threats on more tariffs equal to $267 billion.