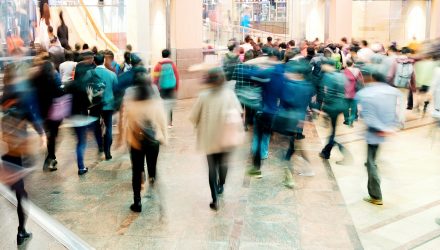 As the Dow Jones Industrial Average plunged over 600 points on Thursday, it was a bond bonanza in the fixed-income space as fears of a global economic slowdown permeated the capital markets. The shift to a risk-off sentiment was welcome news for the bond markets as inflows of capital flooded into fixed-income exchange-traded funds (ETFs).

“The fixed-income space has seen large inflows race into treasury products across most of the curve,” said Brian Gilman, ETF Sales & Trading at Virtu Financial. “The ultra-short duration plays (BIL, JPST, MINT, NEAR) remain popular, but we have started to see a shift to sellers in the front-end of the treasury curve (1-3 years) as we read stories about the front end yields beginning to invert. Further out the curve it has been all inflows the past week—IEI, IEF, TLH, TLT, SPTL, SPTS. Unsurprisingly, with the risk-off mood, we have seen continued sellers in the High Yield space. The aggregate bond names are seeing good inflows (BND, AGG). Emerging Market bond funds have seen outflows.”

The reality that a tangible and permanent trade deal is necessary might be settling in, while the probability of reaching an agreement didn’t improve after news broke that Meng Wanzhou, the CFO of Huawei, one of the world’s largest mobile phone makers, was arrested in Canada  for sanction violations and faces extradition to the U.S. Investors reacted to Wanzhou’s arrest negatively as it could possibly squelch a permanent trade deal between the U.S. and China.

As Gilman mentioned, equities investors are seeking asylum into safer-haven assets like debt with the shift occurring across the spectrum whether it’s short or long-term durations. Notably, inflows into short-term bonds are allowing for a steepening yield curve, which should ease some investor fears of the opposite–an inverted or flat yield curve, which could portend to a forthcoming economic slowdown.