You are at:Home»Investing»Fixed-Income ETFs to Watch After Fed’s Policy Decision 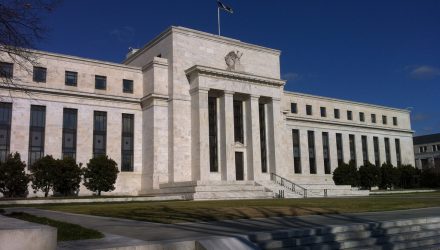 After a two-day monetary policy meeting, the Federal Reserve’s Federal Open Market Committee decided to keep interest rates unchanged on Wednesday. Nonetheless, that decision didn’t alter their hawkishness on the state of the economy after they upgraded it to “strong.”

With the Fed’s vote of confidence in the economy, the prospect for more rate hikes to come through the rest of 2018 is almost certain. The Fed stated that the labor market has “continued to strengthen,” fortified by evidence of data regarding private payrolls, which increased in July by 219,000 versus an expected 185,000.

The upgraded view on the economy came after the Commerce Department reported that GDP grew at a 4.1 percent rate in the second quarter, which represents its fastest growth rate in nearly four years. Given this data, fixed-income investors need to adjust their strategies to accommodate the likelihood that rates will in fact rise.

“This steady as it goes…mail it in (Fed) statement likely means the Fed will stick with” its plan for two more rate hikes this year, says Scott Anderson, chief economist of Bank of the West.

Related: The Secret to Investing in Real Estate ETFs