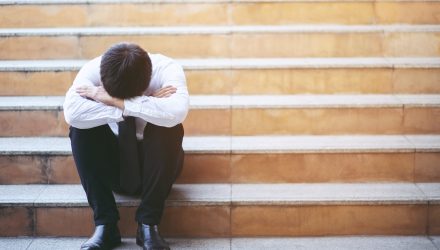 Although it is still early to see the specific effects that the coronavirus is having on the economy, stocks have been pricing in the anticipated slump in the economy, having plummeted into a bear market after making new highs in February.

anecdotally, however, one can see from news headlines that restaurants, gyms, bars, and a plethora of other establishments are either on lockdown or have lost a considerable amount of business and will continue to do so base on restrictions imposed by state and federal governments, as well as health authorities.

ETFs like the Invesco Dynamic Leisure and Entertainment ETF (PEJ)  which include a variety of restaurants, hotels, and airlines in its top holdings underscore this point, having lost nearly 50% year-to-date.

“There’s gonna be an enormous loss or what economist call a deadweight loss as a permanent loss of activity that we can’t recover. The fact is that the thing that’s not happening now won’t then be caught up or triple time in the period when the thing is over. So if you miss going out to a restaurant once a week in the second quarter you’re not gonna go out 13 nights in the third quarter. Some of that activity is gone for good,” said Ian Shepherdson, Pantheon Macroeconomics on CNBC.

New data released on Thursday by the Labor Department, in addition to exploratory analysis of even more recent numbers, offers the first solid confirmation that, as suggested by market action, the new coronavirus is driving the United States economy to a dramatic standstill.

The department said the numbers were “clearly attributable to impacts from the COVID-19 virus. A number of states specifically cited COVID-19 related layoffs, while many states reported increased layoffs in service-related industries broadly and in the accommodation and food services industries specifically, as well as in the transportation and warehousing industry, whether COVID-19 was identified directly or not.”

The government reported that the number of initial unemployment claims climbed to 281,000 last week, a monolithic rise from 211,000 in the prior week. This rise in initial claims of 70,000 is more meaningful than any week-to-week change that occurred during (or since) the 2008 financial crisis.

“Looking at the states’ unemployment numbers that I’ve been coming out of the last few days it looks to me like the order of magnitude of the state seems to be about 10 times higher than the normal weekly number before the crisis. So that means that next week’s job claims number could jump from 200 and something thousand this week to 2 million next week,” Shepherdson added.

But even these numbers underplay the true state of the economy’s crash, as they only depict the state of the economy from the prior week. Based on preliminary news reports this week from 15 states, it’s already apparent that initial claims will burgeon next week, potentially to levels never seen before.

Although Washington has not unleashed the most recent official figures, state officials reported that claims increased 150 percent last week and that the state was seeing an “even more dramatic increase this week.” They also said that call volume surged more than eightfold on Tuesday.

One thing that makes this economic recession particularly insidious is just how quickly it happened. The last recession began in December 2007, but 6 months later some economists were still arguing over whether the economy had entered a recession. This time the answer seems pretty clear.