You are at:Home»Equity ETFs»In the Know: Finding Opportunities in a Late Market Cycle 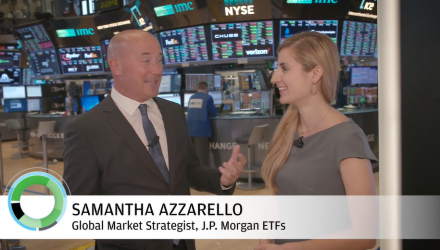 In the Know: Finding Opportunities in a Late Market Cycle

The S&P 500 is in the midst of the longest bull market in history, which may have fear-riddled investors hesitant to jump into the capital markets due to being late to the party. However, some market experts prognosticate that there’s still time to capitalize on opportunities even in a late market cycle.

Samantha Azzarello, Global Market Strategist at JP Morgan Asset Management, cited strong economic data as a precursor for a bull market that could extend itself for another one to three years, as explained in her latest In The Know segment filmed at the NYSE.

“All the data looks really good–GDP growth is surging in 2018 and 2019 on the back of stimulus–we’re saying north of 3%,” said Azzarello. “Earnings growth for this year is 25%–that’s phenomenal–that’s going to support the U.S. equity market.”

As far as locating opportunities in a late market cycle, Azzarello still favors tech. When investors are looking for concentrated exposure to a specific sector in U.S. equities, technology is still in vogue, especially with the market-leading FANG (Facebook, Amazon, Netflix, Google) stocks attracting war chests of investment capital.

However, investors shouldn’t just look to these FANG stocks as the sole representatives of the tech sector. While FANG stocks have reached stratospheric market valuations since the financial crisis in 2008, they’re not indicative of the technology sector as a whole where opportunity in other subareas exist.

“When we think about the US, we still like technology,” said Azzarello. “I bring that up saying that this is just not a five-company, social media story. There’s a lot happening under the surface—all of the growth momentum. I’m even thinking of biotech, right parts of health care, media, video games, there’s so much there.”

Advisors shouldn’t simply point their investors to the capital markets thriving in the US, but also overseas. Despite faltering on year-to-date basis in 2018, emerging market valuations could present opportunities for savvy investors on a going-forward basis.

Related: In the Know – Stay up to date on ETF This Quarter

It’s a reminder that returns are not a simple case of “what have you done for me lately,” but an opportunity for an investor to identify “what can you do for me later.” In the case of emerging markets, there are prospects to be had that could prove potentially profitable in the future.