You are at:Home»Equity ETFs»Why Financial Services ETFs Are Ready To Turnaround 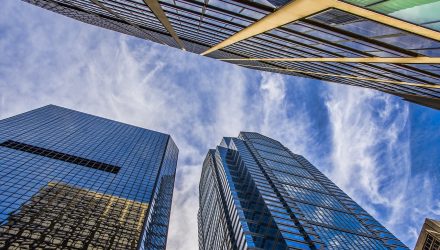 Why Financial Services ETFs Are Ready To Turnaround

Some technical analysts believe the financial services sector, the second-largest sector weight in the S&P 500, is poised to offer some near-term upside.

“The XLF financial select sector ETF has largely held above its 200-day moving average since mid-2016, only briefly dipping below that trend line in September of last year, early April and early May. The ETF closed below that trend line late last week, but quickly rebounded to trade 1.6 percent higher,” reports CNBC.

There other fundamental factors to consider as well.

“With tax cuts being written into law, good reasons to expect more economic growth, regulatory relief already playing out, and a normalizing interest-rate environment, the near-term outlook for regional bank performance is certainly positive,” said Morningstar. “Incorporating these factors has caused our fair value estimates to increase across the board this year. The largest factors contributing to this change were the corporate tax rate dropping to 21%, this was from our previous assumption of a drop to 25%, as well as updated leverage assumptions, as we believe banks will now begin to shed the excess capital that they have built up in response to the post-crisis regulatory environment.”