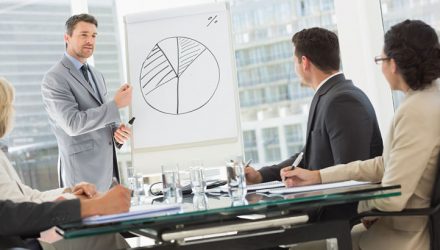 The Financial Select Sector SPDR (NYSEArca: XLF), the largest financial sector-related exchange traded fund, is up about 6.8% year-to-date, a performance that lags the S&P 500 is mediocre among sector ETFs. However, some market observers believe the financial services sector offers opportunity in the second half of the year.

With a steepening yield curve or wider spread between short- and long-term Treasuries, banks could experience improved net interest margins or improved profitability as the firms borrow short and lend long. Although the Fed has raised interest rates twice this year with another rate hike likely coming before the end of 2017, there are concerns about the central bank’s dovish tone and its impact on ETFs such as XLF.

David Kostin of Goldman Sachs notes, “financials return-on-equity and price-to-book ratios should benefit from companies raising total capital returned to shareholders by some $40 billion or 43% in the next year. In total, dividends and buybacks are expected to jump to $132 billion from $92 billion with money center banks hiking payouts by 54% and regional banks lifting payouts by 36%,” reports Crystal Kim for Barron’s.

Some strategists also argue that the financial sector may be a good area to look at this time around, given the potential for growth in a rising rate environment, along with potential tax and regulatory changes under the Trump administration.