You are at:Home»Equity ETFs»Financial ETFs Among Hated Plays of Past Week 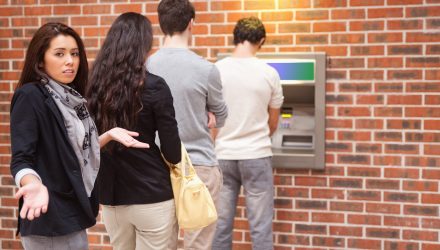 Financial ETFs Among Hated Plays of Past Week

A pullback in Treasury yields and the pending results of bank stress tests have weighed on some financial sector investors’ minds, triggering large outflows out of bank-related ETFs.

For instance, the iShares U.S. Financial Services ETF (NYSEArca: IYG) experienced $174 million in redemptions on June 19, a record outflow for the fund, report Carolina Wilson and Felice Maranz for Bloomberg. Additionally, volume was over $214 million, or almost 15 times the average daily turnover in the past year.

The Financial Select Sector SPDR (NYSEArca: XLF), the largest  financial services-related ETF, was also among the most hated ETF plays over the past week as investors pulled $842 million from the fund for the week ended June 19, according to XTF data.

The mounting trade-war concerns pushed investors toward safe-haven bets, which dragged down yields on benchmark 10-year Treasuries this week. The yield on 10-year Treasuries dipped to as low as 2.88%, the lowest since June 1, but yields are now back up to 2.928% Wednesday.

Bank stocks typically do well when rates rise as firms can capitalize on wider margins between loans and deposits.

The financial sector may also be hunkering down ahead of the first round of bank stress tests due to be released on June 21. The Federal Reserve’s instructions for 2018 Comprehensive Capital Analysis and Review (CCAR) stress tests are being viewed as tougher this year.