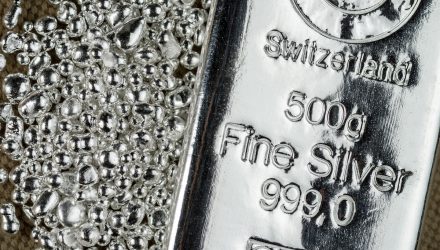 Entering 2019, plenty of commodities market observers expected silver to be among the year’s leading precious metals. However, silver and the related exchange traded funds, such as the  iShares Silver Trust (NYSEArca: SLV), started the year in sluggish fashion.

Silver’s slack start to 2019 is betraying what were optimistic forecasts for the metal heading into the year after a rough 2018. A more accomodative Federal Reserve would bolster the case for silver. Looking ahead, silver and other precious metals may continue to face an uphill struggle as the Federal Reserve is expected to keep hiking interest rates, which makes non-yielding assets like commodities less attractive.

Up nearly 3.41% over the past week, SLV is finally shedding its lethargic ways, prompting some commodities investors to speculate that silver could actually live up to its 2019 hype.

“Silver surged 9.1 percent in December, its biggest monthly gain in almost two years,” reports Bloomberg. “The commodity has benefited as a persistent trade war, weakening dollar and prospects of slower pace of U.S. rate increases drove haven demand for precious metals. The price outlook is improving at a time when demand for gold’s cheaper cousin is poised to top production for a seventh straight year.”

A Good Start for SLV ETF

Living up to its tradition of solid January performances, SLV is up 2.48% this month.