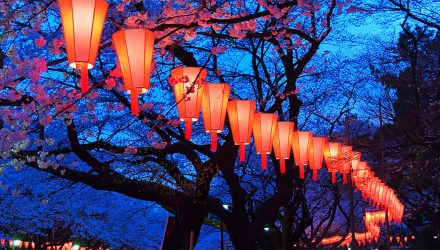 Up 3.4% year-to-date, the CurrencyShares Japanese Yen Trust (NYSEArca: FXY) has been a solid performer among currency exchange traded funds this year. However, closer examination reveals that the yen has recently been retreating.

Over the past month, FXY is off 4.3% and some traders believe the Federal Reserve could lead to more pressure on the Japanese currency. The Bank of Japan’s loose monetary policies along with a wider rising rate differentials between the U.S. and Japan could support a depreciating Japanese yen currency over the short-term, which would bolster the export-heavy Japanese market.

Investors are expecting the Fed to hike rates in December, and Todd Gordon says that means you want to bet against the Japanese yen,” reports CNBC. “Bond prices have been falling as expectations of a December rate hike have risen, and the yen’s correlation with Treasury prices has the TradingAnalysis.com founder predicting that the Japanese currency will drop as well.”

“The Bank of Japan’s (BoJ’s) equity purchases and domestic investors’ increasing preference for stocks provide further support. Our analysis shows Japanese equities remain far from a crowded trade as foreign investor flows into Japan have recently subsided,” according to BlackRock.