You are at:Home»Featured»Fearless Girl Moving to New Home Outside NYSE 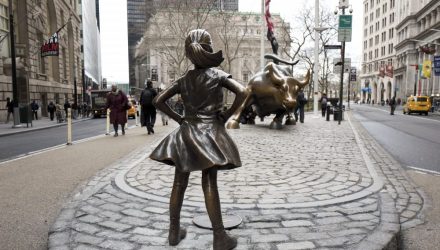 Cyrus Taraporevala, State Street Global Advisors President and Chief Executive Officer, thanked de Blasio and the “millions of people from New York City and all over the world who have enthusiastically embraced Fearless Girl and her powerful message.”

“Since Fearless Girl’s placement, more than 150 companies have added a female director to their boards,” Taraporevala said. “Our hope is that by moving her closer to the NYSE she will encourage more companies to take action and, more broadly, that she will continue to inspire people from all walks of life on the issue of gender diversity.”

Since installing Fearless Girl in 2017, State Street Global Advisors has focused on more than 700 publicly-traded companies without a single woman on their board.

Among those companies, 152 have since added a female director to their board and another 34 companies have pledged to do so. The firm also voted against more than 500 companies that failed to take action.

To build on Fearless Girl’s impact, State Street Global Advisors is now calling on portfolio companies to create more transparency and share more data about the number of women they have at all levels of management.

State Street Global Advisors will begin screening and engaging with companies in the STOXX 600 and FTSE 350 indexes to start, seeking to understand company practices that promote diversity, and has plans to expand this effort in the future.