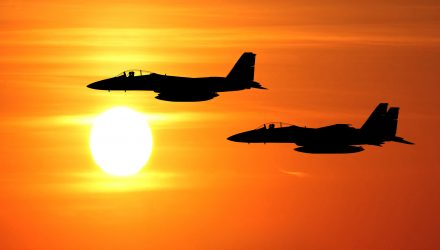 Thanks to a familiar catalyst, some well-known and already surging aerospace and defense ETFs notched another round of record highs earlier this week.

The specter of war with North Korea, which has previously boosted aerospace and defense ETFs, is again serving as an upside catalyst for the group. The iShares U.S. Aerospace & Defense ETF (BATS: ITA), the largest fund in the group, also renewed its membership in the all-time high club yesterday, pushing its year-to-date gain to nearly 30%.

“Year-to-date, the S&P 500 Aerospace and Defense Industry subsector index is up 30 percent, compared to 12.9 percent for the S&P 500. Since July 3, when North Korea fired its first intercontinental ballistic missile and Trump said in a tweet, ‘Does this guy have anything better to do with his life?’ the index has climbed by 14.3 percent,” reports CNBC.

ITA is a cap-weighted ETF, meaning it has larger weights to big-name defense stocks, including Dow components Boeing (NYSE: BA) and United Technologies (NYSE: UTX). Aerospace and defense stocks are part of the broader industrial sector and have been important drivers of the sector’s performance over the past year. In fact, aerospace and defense names have been industrial leaders. Boeing and United Technologies are two of the best-performing Dow stocks this years.