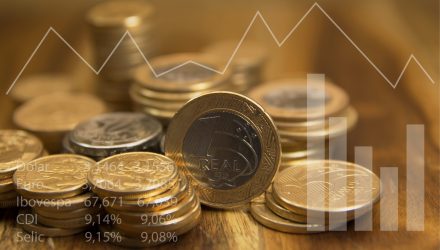 EMLC, which tracks the J.P. Morgan GBI-EM Global Core Index, has a 30-day SEC yield of 5.88%. That is well above what investors find on traditional aggregate bond funds, which are usually lightly allocated to emerging markets debt. Even with that tempting yield, over 56% of EMLC’s holdings carry investment-grade ratings.

“Despite the relatively recent explosive growth of ETFs in general, these vehicles still make up only a small part of the overall emerging markets debt market,” according to VanEck research. “According to Morningstar, there is approximately $500 billion in emerging markets debt managed assets globally. ETFs comprise less than 10% of this total and a similar proportion of such assets managed in the U.S. However, investor flows tell a different story. Year-to-date through October, ETFs garnered 23% of net inflows into the asset class globally and 49% in the U.S.”

Emerging markets currencies are benefiting from the U.S. dollar’s disappointing performance this year, but even if the dollar rebounds, that move is expected to be gradual, indicating emerging currencies can whether incremental dollar strength.