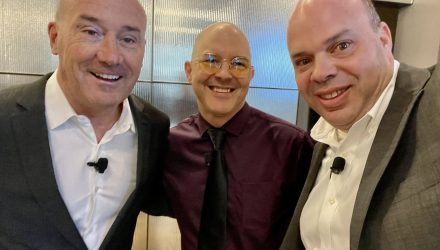 Previewing the kind of insight and analysis that will be on display at Exchange, VettaFi vice chairman Tom Lydon, head of research Todd Rosenbluth, and financial futurist Dave Nadig appeared at the Investment Insights Summit last week.

Speaking to what VettaFi does, Rosenbluth said, “I view a lot of what we do from a research perspective is to connect the dots from what advisors are looking for to the tools and services that the asset managers are offering to them.” With over 3,000 ETFs available in the U.S., advisors need a way to sort through noise to find the products they can use to best serve their clients.

“There are some things that an ETF is just perfect for,” Nadig noted, taking care to point out that there are many other tools in the advisor toolkit as well.

What to Look for in an ETF

The first polling question of the summit centered on was what the most important metric to consider is when choosing an ETF. Lydon put his vote in for expense ratio, given how much more affordable many funds have become. “It’s tough for me not to pick exposure. Certainly, it is that case that expense ratio matters,” Nadig responded, arguing that though expense ratio might be critical when flipping from an expensive benchmark-hugging active fund to a much less expensive one, there are still a number of inexpensive options, and knowing what’s in each fund can be a difference-maker.

Rosenbluth pointed to the iShares Core S&P 500 ETF (IVV), the SPDR Portfolio S&P 500 (SPLG), and the Vanguard S&P 500 ETF (VOO) for cheap direct exposure to the S&P. Rosenbluth added, “We also tend to see that for many advisors, especially if they came from the mutual fund world, performance track record matters.”

Nadig warned that due diligence is critical, as it can be easy to read what’s on the tin but miss what a fund is actually doing. Rosenbluth concurred, noting that “the devil is often in the details with ETFs.”

Flows in the ETF Space

ETFs have been gaining market share, with huge inflows even as mutual funds see outflows amid an unusual market environment in 2022. Lydon brought up ARK, which has had a rough time from a performance perspective but continues to see flows. He recounted a conversation with Cathie Wood, asking her what she would say to advisors who bought ARKK in February. He said she remains convicted and would advise that if an investor invested for the right reasons, they should double down. “If you did a 4% allocation and it’s now 2% of the portfolio, leveling up, more than ever, might be the right thing to do.”

ETFs flows are likely to end the year around $600 billion in flows, their second-biggest year ever. Nadig underlined that this big year happened across multiple asset classes. “It wasn’t just that everyone was chasing one thing.” He sees this as a good, healthy sign for the ETF industry, and also not unexpected in a down market year, where investors tend to pull away from high-cost, actively managed mutual funds and put their money in less expensive funds. “Mutual funds have lost $800 billion in outflows this year,” he observed.

Dividend ETFs have been a big winner as the market shifts to a defensive posture. “In third quarter, 96% of U.S. dividend-payers either kept or increased their dividends,” Nadig said. The JPMorgan Equity Premium Income ETF (JEPI) is an active fund that’s garnered a lot of attention in 2022. According to Nadig, it looks across the board at income opportunities, utilizing things like options. Nadig continued, “That’s really compelling for folks reacting to, for the first time in a long time, an inflationary period.”

Active Has a Big Year

Lydon said that “the ETF industry was built on the backs of traditional indexes,” before asking whether active management’s big year, performance-wise, has changed things.

According to Rosenbluth, “The short answer is ‘yes.’” Capital Group, T. Rowe Price, Fidelity, and JPMorgan all have active products. With more dispersion in the stock market, active funds have had opportunities to seize on greater success. Rosenbluth also noted that firms like Avantis have relatively low-cost active options.

Lots of active mutual fund issuers have made the leap into the ETF wrapper. Though some issuers are concerned about being front-run, Nadig believes that whether a fund is fully or semi-transparent, the products do work as intended. “Everything is doing what it says on the tin,” he said. Nadig thinks that front concerns are frequently overblown, but from the buyer’s side, it doesn’t really matter.

Looking Into the Crystal Ball at 2023

“The Fed is likely to pivot, they are likely to first slow interest rate hikes and then, at some point, cut interest rates,” Rosenbluth said. Positioning for that is important. He also does think a recession is on the horizon. Growth and thematic strategies could also see a rebound, according to Rosenbluth, especially if the Fed does slow or pivot on hikes.

Nadig added, “Everyone is now a global macro investor whether they wanted to be or not.” He also sees structural inflation and more nominal growth as a possible outcome in the future.

Global diversification is going to be important, but as noted, European indexes have “been beaten up by the strong dollar.”

Bonds are also likely to see resurgence as their yields continue to look attractive. Nadig quipped that this might be the first year you could say you want to use a bond ladder and not get laughed out of the room. TIPS are starting to look good too, despite tons of outflows in TIPS ETFs this year. “TIPS all of a sudden make sense,” Nadig said, observing that inflation is likely not to pull down to 2% for a long while.

“The ETF industry has kind of been like the auto industry when you talk about the big three,” Lydon said before asking, “But is it changing? Do we have the Teslas of the ETF marketplace that are going to chip away at the big three?”

Nadig noted that Vanguard is gobbling up enough flows to likely usurp Blackrock at some point. He also sees a lot of potential dynamism below the top three, with Schwab “out-Vanguarding Vanguard” with the strategy of being a low-cost producer in core beta segments. “It may be boring, but boring can be good in a portfolio,” Nadig said. Below the top five, he sees a ton of innovation and a lot to like.

Dimensional has gone from highly exclusive mutual funds to being one of the top 10 issuers, largely through conversions. “They weren’t the first ones to convert from mutual funds to ETFs, but they did it in bulk,” Rosenbluth said, pinning them as a firm to watch, particularly from the active management angle.

Knocking on $20 billion dollars, Pacer is also turning heads. Their biggest ETF, the Pacer US Cash Cows 100 ETF (COWZ) has over $10 billion in holdings. Rosenbluth noted that high-quality companies are doing well, which makes COWZ appealing, and he sees these kind of strategies as likely to continue to see success in 2023, given the market environment.

Pivoting to China, Lydon asked Nadig and Rosenbluth what to expect. Nadig said, “Anybody who tells you they have it figured it out is absolutely making it up.” He sees it as reasonable to be cautious on China, given their policy concerns. Despite that, Nadig pointed out, “China and India are huge powerhouse drivers of the global economy, so to have no exposure there is a big bet.”

One big story from 2022 is the rise of managed futures. Funds like the KFA Mount Lucas Managed Futures Index Strategy ETF (KMLM) and the iMGP DBi Managed Futures Strategy ETF (DBMF) have been performance superstars, both up around 40% on the year, a remarkable feat in a year where equity markets are down double digits.

Nadig noted that in atypical year, managed futures are likely to underperform equity markets, existing as a diversifier for years like this.

Downside protection was also in vogue in 2022 and could have a big year in 2023 as well. Low-volatility funds such as the Invesco S&P 500® Low Volatility ETF (SPLV) and the iShares MSCI USA Min Vol Factor ETF (USMV) as well as Innovator’s Defined Outcome suite are helping keep client portfolios protected.

Lydon noted that technical indicators are showing some positive signs going into Q1. Rosenbluth concurred and said, “I think the trend is starting to become the friend in a more bullish mindset heading into 2023.”

If you haven’t heard, we’ll be discussing how to capitalize on these tailwinds and mitigate the headwinds at Exchange, coming February 5-8th. Join 2000 members of the investment community in Miami Beach and connect with financial advisors, thought leaders, and industry experts.

To learn more about the event and register, please visit the Exchange website.