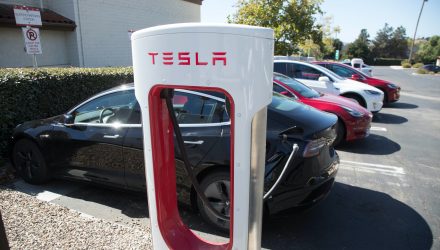 ETFs With Tesla Jump As The Automaker Gets an Upgrade

Tesla stock is surging today after a note late Wednesday from Mark Delaney, where the Goldman analyst raised his rating on Tesla stock to buy from neutral and adjusted his annual target from 455 to 780, the highest on Wall Street. The move seems to be helping to elevate ETFs holding the company as well.

Tesla has climbed 603% YTD, aided by its much-heralded entrance into the S&P 500 on December 21 and diminishing fears about its ability to make profits.

“We believe that the shift toward battery electric vehicle (EV) adoption is accelerating and will occur faster than our prior view,” Delaney said.

The analyst said that battery prices are dropping at a more accelerated rate than first anticipated, which ameliorates the economics of EV ownership. In addition to the battery price decline, recent increases in regulatory proposals from some jurisdictions to stymie or eliminate the sale of new internal combustion engine vehicles entirely in 10 to 20 years could be beneficial for electric vehicle producers such as Tesla, according to Delaney.

“If Tesla sustains its mid to high 20% range share of the EV market, then it could reach 15 million units by 2040 (and about 20 million under our upside-case EV market adoption scenario),” Delaney wrote.

Tesla’s integrated hardware/software model will help maintain its leadership in the EV market as well, according to the Goldman analyst.

“We believe that full service driving (FSD) software and energy businesses could be more valuable than we previously thought,” he said.

So what cause Delaney to change his mind about Tesla, adjusting from his Neutral downgrade in early summer?

“When we downgraded Tesla stock to Neutral from Buy in June 2020, despite our positive view of EV adoption in the long-term, we had been concerned about a potential slowdown in demand as Tesla had lowered prices more than we expected, and also because the delivery lead time for the new Model Y crossover was falling despite media reports that Tesla was facing some manufacturing challenges for this important product,” he explained

Shares advanced 5% to $598.50 Thursday, where Tesla stock has found support at its 10-day moving average after setting a record high at 607.80 on Monday before reversing lower, according to MarketSmith chart analysis.

The electric carmaker’s stock has gained an incredible 592% in 2020, and has reported five straight quarters of profitability, proving its ability to post consistent profits.

For investors looking at ways to play Tesla using ETFs, the ARK Innovation ETF (NYSEArca: ARKK) and VanEck Vectors Low Carbon Energy ETF (NYSEArca: SMOG) are worth examining. ARKK is up over 2.63% Thursday.