You are at:Home»Featured»Stock ETFs Trade Flat to Lower as Investors Monitor Earnings 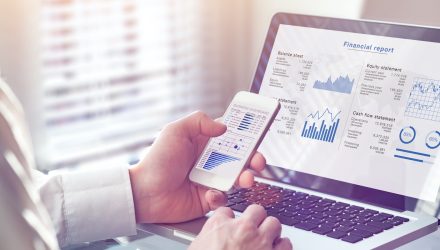 Stocks and index ETFs were flat to lower on Tuesday as investors prepared for a busy release of corporate earnings.

Some of the bigger market players like GE and Raytheon posted strong earnings results results already, helping to steady the indexes Tuesday. General Electric shares surged 9% on its better-than-expected industrial free cash flow for Q4 and a sanguine outlook for the year. Meanwhile, Raytheon is up another 2.87% on Tuesday and Johnson & Johnson jumped over 3% after the drug maker’s earnings beat analyst projections. The Fidelity MSCI Industrials Index ETF (FIDU), which holds a stake of GE is lower on Tuesday however.

“The free cash flow of both these companies, Raytheon and GE, is surprising,” Cramer said, while adding that GE’s health care, wind, and hydrogen turbine businesses are also growing.

Speculative Positivity in the Market?

But while some market stalwarts outperformed, there was significant volatility in heavily shorted stocks like GameStop and AMC Entertainment, where exuberant retail investors active in chat rooms do battle with short-selling hedge funds, prompting concern from some investors that stocks could stray from fundamentals as speculation flourishes. GameStop surged an additional 20% on Tuesday, while AMC rocketed over 10%.

“The short squeeze/volatility we saw in heavily-shorted stocks such as GameStop and others yesterday only further confirms that, at least in the near term, complacent/frothy investor sentiment is the biggest near-term risk to stocks,” Tom Essaye, founder of Sevens Report, said in a note Tuesday.

Investors have seemed to be optimistic in the earnings season thus far.

Many investors are still concerned about the new coronavirus strains that are tearing through the global population. Biotech pioneer Moderna said Monday that its vaccine does offer some protection against a new strain of Covid-19 uncovered in South Africa, while officials in Minnesota reported finding the first U.S. confirmed case of a strain discovered in Brazil.

Worldwide, the coronavirus has infected nearly 100 million people and killed over 2 million so far. Vaccine rollouts continue across the globe.