You are at:Home»Featured»ETFs to Hedge Against Recession Risks 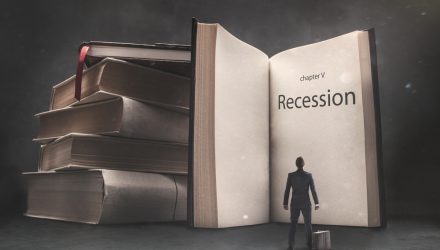 ETFs to Hedge Against Recession Risks

While more sound the alarm on the economy’s potential dip into a recession, investors could turn to inverse or bearish exchange traded fund strategies to hedge further risks.

After the Federal Reserve executed a 75 basis point interest rate hike in response to the spike in inflation with more expected ahead, more observers are warning of a potential fall toward a recession, and many doubt that the sell-off in the equities market will abate without a clear turning point in inflation data, Reuters reported.

According to data from Bespoke Investment Group, a recession could mean more pain for the equity markets, since bear markets accompanied by recession are typically longer and steeper, with a median decline of about 35%. The S&P 500 is already in a bear market after falling 22.2% year-to-date.

“If we end up in a recession later this year or early next year, earnings would decline on equities and stocks would probably go down further,” Sean McGould, president and co-chief investment officer at hedge fund firm Lighthouse Investment Partners, told Reuters.

The recession fears stem from investors’ doubts about the way the Fed is handling inflationary pressures, as many believe that policy makers are only now trying to play catch-up. Consequently, the Fed’s actions may become overly zealous in tightening monetary policies and drag the economy into a recession.

“The Fed is in a very difficult position that frankly they put themselves in by mishandling monetary policy and allowing inflation to rise as much as it has,” Michael Rosen, chief investment officer at Angeles Investment Advisors, told Reuters. “The so-called soft landing is looking more and more tenuous.”