You are at:Home»Featured»ETFs To Explore As S&P 500 Targets 7th Consecutive Monthly Gain 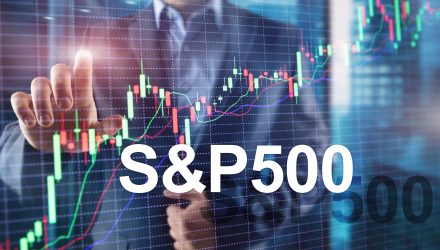 Although it has pulled back from its earlier record highs, the S&P 500 is targeting monthly gains for the seventh consecutive month. With the last day of August already underway, the benchmark is headed toward a 3% monthly gain, improving its 2021 gains to almost 21%.

For the S&P 500, it will be its most enduring winning streak since a 10-month period ending in December 2017. What’s more, this also mark’s the benchmark’s 9th positive month out of the last 10.

Analysts are optimistic that there will be even more upside to come for the index.

“We believe that the momentum toward reopening and recovery is intact and that there is further upside to equities,” wrote Mark Haefele, Chief Investment Officer of global wealth management at UBS, in a note. “The S&P 500 rally is underpinned by robust earnings growth…With the economic recovery broadening, we expect cyclical sectors, including energy and financials, to take the lead.”

Investors have been invigorated by healthy corporate earnings, providing solid valuation support and a reason for stock prices to continuing rallying. With the second-quarter reporting season concluding soon, the S&P 500 is set to notch an earnings growth rate of 95.4%, marking the largest increase since the fourth quarter of 2009.

“We believe we’re still in the early innings of the cycle and that strong economic and earnings growth and relatively low rates through 2022 should support higher equity prices and sustain the bull market,” Wells Fargo strategists said in a note.

The Federal Reserve policy environment has played an important role in aiding equities, other financial experts have noted, as the Federal Reserve’s still-accommodative path and the prospects of additional government spending with the infrastructure and budget reconciliation bills in Congress could continue to be positive for stocks.

However, there have been some recent discussions of future changes, with key central bank officials like Fed Chair Jerome Powell suggesting that he is monitoring the incoming data and Delta variant’s impact on the economy before charging ahead with a policy move, but is looking to begin tapering.

“We do think that tapering, in general, will be a non-event, most likely because first, the market has had time to react throughout this year,” James Liu, Clearnomics Founder and CEO, told Yahoo Finance. “The Fed has done a great job telegraphing all this.”

“Whether it’s September or November for the announcement of taper will really depend on the jobs report coming up and some more economic data,” he added. “But regardless, the market seems to expect it at this point. This is very different from 2013 when the market had to adjust very abruptly to taper.”

However, there are some additional concerns for the S&P 500, as the Conference Board’s consumer confidence index lowered expectations in August, based on the latest surge in the coronavirus, which has generated anxiety among citizens and could carry over to stocks.

According to Bloomberg data, the firm’s headline index dropped to 113.8 in August, missing projections for 123.0. That was a fall from 125.1 in July as well, which was also downwardly revised from the 129.1 previously reported.

Meanwhile, a subindex tracking consumers’ expectations for the future slid to 91.4 in August from 103.8 in July. Consumers’ assessments of present situations also worsened during the month.

“Concerns about the Delta variant—and, to a lesser degree, rising gas and food prices—resulted in a less favorable view of current economic conditions and short-term growth prospects,” Lynn Franco, senior director of economic indicators at The Conference Board, said in a press statement. “Spending intentions for homes, autos, and major appliances all cooled somewhat; however, the percentage of consumers intending to take a vacation in the next six months continued to climb.”

“While the resurgence of COVID-19 and inflation concerns have dampened confidence, it is too soon to conclude this decline will result in consumers significantly curtailing their spending in the months ahead,” Franco added.

Alabama, Georgia, Texas, Florida, and Arkansas have less than 10% left of their ICU bed capacity, according to data from the Department of Health and Human Services.

In Georgia, the CEO of Northeast Georgia Health Systems noted that the state had 287 Covid patients Monday morning, which is more than the hospital had had since January when the pandemic was flaring up.
“So, in essence, our hospitals are full,” Carol Burrell said. “We’re looking to add space in hallways and conference rooms in waiting areas. Our emergency rooms and our urgent care centers are seeing higher volume than they’ve seen throughout this pandemic,” she said.

In addition, while demand for housing caused an explosion in prices early in the pandemic, as Americans sought more space and flexibility while the housing supply was limited, that trend may be waning, as vaccinations are permitting some employers to recall workers to offices and schools and universities have reopened for in-person learning.

“Some early data suggests that the buyer frenzy experienced this spring is tapering, though many buyers still remain in the market,” said Selma Hepp, deputy chief economist at CoreLogic. “Nevertheless, less competition and more for-sale homes suggest we may be seeing the peak of home price acceleration. Going forward, home price growth may ease off but stay in the double digits through year-end.”

For investors interested in using ETFs to play the S&P 500, there are many options besides the classic  SPDR S&P 500 ETF Trust (SPY).

One fund is the Direxion Daily S&P 500® Bull 3X Shares ETF (SPXL). This ETF offers 3x daily long leverage to the broad-based S&P 500 Index, making it a powerful tool for investors with a bullish short-term outlook for U.S. large cap stocks. Investors should note that leverage on SPXL resets daily, which results in the compounding of returns when held for multiple periods. BGU can be a powerful tool for sophisticated investors but should be avoided by those with a low-risk tolerance or a buy-and-hold strategy.

Another ETF to invest in the benchmark index is the iShares Core S&P 500 ETF (IVV). IVV has become one of the largest ETFs in the world, offering exposure to one of the world’s best-known and most widely followed stock indexes. This ETF tracks the S&P 500 Index, which includes many large and well-known U.S. firms. As a result, investors should think of this as a play on mega and large cap stocks in the American market.