You are at:Home»Investing»ETFs to Capture Increasing Buyback Activity 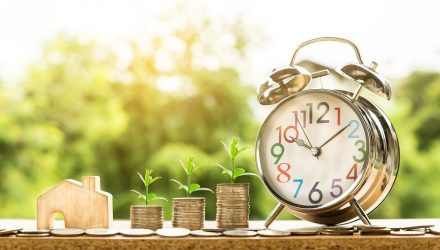 U.S. companies have announced another round of aggressive share repurchases in response to the savings from the recent corporate tax cuts, and investors can also benefit from the plans through a targeted exchange traded fund strategy.

Large U.S. companies have announced share buybacks exceeding $200 billion in the past three months, or more than double for the same period year-over-year, the Wall Street Journal reports.

An uptick in buyback announcements occurred in December as Washington lawmakers put the finishing touches on a bill to cut U.S. taxes by $15 trillion over a decade. The tax overhaul plans reduced the tax rate on large corporations to 21% from 35% and it also included a low one-time reprieve on profits hoarded from abroad to encourage repatriating more than $2 trillion held in overseas subsidiaries.

The result is Corporate America is once again flush with cash, and many are looking at their new found cash stores as a means to produce more value for investors through share buybacks. Of the S&P 500 companies, 28% revealed they would use the tax gains to increase shareholder returns, according to Morgan Stanley’s analysis – the bank expects companies to spend about 43% of their savings on buybacks and dividends, and 30% on capital expenditures and labor.