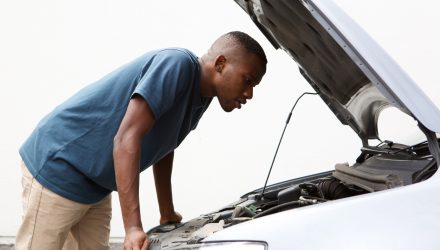 ETFs: The Importance of “Looking Under the Hood”

The growth of the ETF industry has been a boon to investors, providing access to new asset classes and time-tested investment strategies at a competitive cost. However, the industry’s rapid growth has also brought its own set of challenges with one of the biggest being how to ‘make sense of it all’.

With thousands of ETFs in existence and new offerings becoming available every day (see chart below), it has become increasingly important to thoroughly research an ETF before buying it. Most ETFs are not as alike as their naming conventions or category classification might imply. Only by ‘looking under the hood’ can an investor truly assess the unique features and risks that ultimately impact the performance of an ETF in varying economic environments. 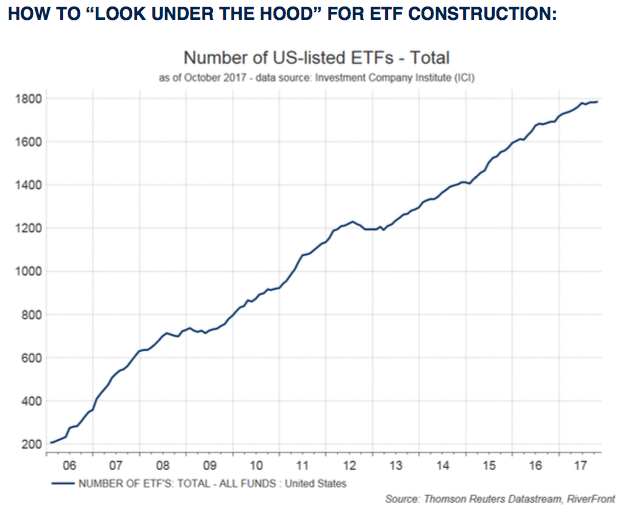 Many of the investment professionals at RiverFront have been building ETF portfolios for nearly 15 years and we are fortunate to have a number of proprietary and third-party tools that enable us to easily identify and quantify the risks in every ETF we invest in.  However, since these tools can be expensive and difficult to develop, we often see investors relying on simple points of comparison like expense ratios or size/trading volume when choosing between several ETFs.

This lack of in-depth analysis means that investors can be unknowingly comparing ‘apples’ to ‘oranges’ and making a purchase decision based upon which is cheapest or which is most popular.  In this edition of the Weekly View we share a framework to help compare ETFs and properly assess their key features and risks.

We believe that the three most important characteristics to consider when comparing ETFs are: 1) Universe Definition, 2) Selection Criteria and 3) Weighting Methodology.

1) Universe Definition: Every ETF is built from a defined universe of stocks.  A universe can be defined broadly, like all companies in the Wilshire 5000, or narrowly, like all biotechnology companies in the S&P 500.  What a universe includes or excludes can have meaningful performance implications, and thus should be an important consideration when comparing ETFs.  Below are a few examples of universe differences that are often overlooked by investors.

a) Europe Example: What one index provider defines as European companies may differ from the definition used by another provider.  One important distinction is whether they are including companies that are members of the European Union (EU), or members of the European Monetary Union (EMU).  The EU is comprised of 28 countries that have agreed to principals governing interactions including trade and immigration.  The EMU, on the other hand, is made up of only the 11 countries that utilize the Euro as their common currency.  A number of countries like Germany and France are members of both the EU and EMU; however there are a number of countries like the UK, Switzerland, and Norway that are members of the EU and not the EMU.  The countries in the EU but not in the EMU represent nearly 50% of the EU index and their exclusion can be expected to impact an ETF’s performance.  This difference may become increasingly relevant as the UK faces its own unique challenges navigating its exit from the EU (Brexit).

b) Emerging Market example: The two largest emerging market (EM) ETFs have one key difference, the inclusion of South Korea. South Korea is the 2nd largest country weighting in the emerging market index as defined by MSCI, currently representing roughly 15% of the index.  The FTSE emerging market index, which is the index behind the largest EM ETF in the marketplace, does not consider S. Korea as an emerging market country and thus does not include it in its index.  The dissimilar treatment of S. Korea can have material performance implications on the two ETFs, as it has so far in 2017, with S. Korea significantly outperforming other emerging market countries.  Investors worried about escalating tensions with North Korea, or believe that these fears are overblown, need to consider these differences when choosing their EM ETF.

c) Technology Example: Some indexes define technology more broadly than others. A key area of differentiation is with regard to how they define Internet Retail.  Some index providers classify these companies within the technology sector, while others view them as members of the consumer discretionary sector.  Similar varied treatment can be found with regard to the media and the electric vehicle industries.  With Internet retail, media and electric vehicles comprising a significant portion of some technology indexes, the performance implications can be profound.  Those that believe companies in these industries represent the future of technology should consider an ETF that is built on a more inclusive index.

2) Selection Criteria: The next characteristic to consider, in our view, is the ETF’s selection methodology. ETFs with a selection methodology based on criteria (i.e., ‘factors’) other than ‘market capitalization’ are often referred to as ‘Smart-Beta’.  A factor is a characteristic like ‘share-price volatility’ or ‘dividend yield’ that is used to screen or rank securities within a defined universe.   With over 2,000 listed ETFs, there is likely an ETF to satisfy the needs of even the most discerning ‘stock-picker’.  An ETF’s selection criteria can be simple, utilizing just a few static factors, or sophisticated like those that employ dozens of variable factors.

a) Number of Criteria (Factors): Every selection methodology has the potential to introduce biases into an ETF that may not be entirely transparent or intentional. For example, an ETF that selects its constituents using a factor like ‘value’ will also likely impart significant sector overweights and underweights into the fund.  Many “value”-based indexes, for example, are currently overweight financials and underweight technology and healthcare. Investors who are bullish on technology and bearish on financials should steer clear of value ETFs with these structural biases. A general rule of thumb is that ETFs that employ a small number of factors (four or less) tend to have more biases than those that have more complex factor selection methodologies.  While there is nothing inherently wrong with a bias if it’s what an investor intended, it is important that those biases are known ahead of time and not a ‘surprise’ later.  We like to say: ‘Every ETF has a bias, never make a purchase decision before you find it.”

b) Factor Definition: Selection methodologies can also vary in the way they define a factor. For example, the ‘value’ factor can be defined differently by different index compilers.  One might use a company’s price/book ratio while another uses price/earnings or price/sales.  To complicate things further, one provider may only include the constituents with the most extreme ‘value’ rankings and another might include a broader group of companies with attractive ‘value’ rankings.  This can lead to significant cap, sector and industry weighting differences between two similar sounding ‘value’ ETFs.  For example, as of 11/30/17, the two largest value ETFs as determined by ETFdb vary in their small and mid-cap exposure by ten percentage points.  Just like you should not judge a book by its cover, it can be dangerous to judge an ETF by its name alone.

c) Static or Variable (Active): Active ETFs differ from traditional ETFs in an important way. Active ETFs do not follow an index and as a result have the flexibility to adjust their selection criteria, as opposed to traditional ETFs that follow indexes whose selection methodology is set at the time of the index’s inception.  There are pros and cons to each methodology.  One advantage of active ETFs is that they have the ability to evolve and adapt to a changing investment climate.  Some might view this advantage as a disadvantage, since the ETF’s biases will be dynamic and less predictable. For example, an active US equity ETF that falls under a mid-cap classification one day, may become more large-cap focused three months later.

i. Size Bias: ETFs that utilize a market capitalization weighting scheme will tend to contain a size bias that favors large-caps, while a non-cap weighted methodology will tend to have greater exposure to mid and small-caps. This can be particularly important at various market stages.  For example, it is not unusual for small and mid-caps to outperform in the early stage of a bull market due to their greater leverage to improving business conditions, while large-caps often outperform in a bear market when investors demand stronger balance sheets.

ii. Concentration Bias: Market-cap weighting methodologies can also introduce concentration risk to a portfolio, where a handful of securities comprise a significant portion of the ETF.  A popular South Korean index, for example, is cap-weighted and dominated by a single company that comprises more than 23% of the index. Concentration issues can undermine an objective to diversify risk, particularly in higher risk areas like biotechnology or emerging markets.   Ultimately, an unintended concentration bias can turn the ‘right’ idea into the ‘wrong’ outcome if not monitored closely.

b) Factor-Weighted: Factor-weighting methodologies assign the greatest weights to the stocks that have the highest factor scores.  For example, the largest constituents in a factor-weighted momentum ETF will be the stocks displaying the strongest momentum.  A factor-weighted ETF can be expected to perform differently than one that simply identifies the 100 strongest momentum stocks and weights them equally. Factor-weighting methodologies have the potential to amplify returns positively or negatively.

Bottom Line: One could argue that buying an ETF is similar to buying an automobile. A car buyer rarely makes their purchase decision based solely on price.  Instead they consider the vehicle’s design, drivetrain and safety features to determine if it meets their unique needs.  In most cases, the decision to purchase an ETF should also not be made solely on the fund’s expense ratio, since there are likely other distinguishing features that will be more impactful to the fund’s performance.  By understanding the construction and drivers of performance in an exchange-traded product, investors can minimize the potential for surprises down the road.