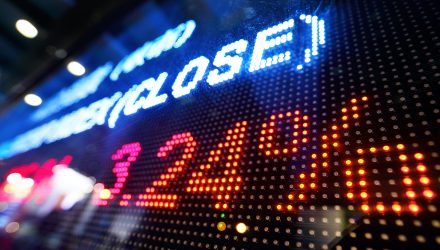 Stocks and index ETFs fell on Wednesday as investors ready themselves for the results from the Federal Reserve’s two-day policy meeting and comments from Fed Chair Powell later in the day.

The S&P 500 lost 0.5%, while the Nasdaq Composite sold off 1.2%, as technology shares were ensnared by climbing bond yields again. The Dow Jones Industrial Average was the only winner of the three in early trading, adding 0.2%.

Major stock ETFs are mixed Wednesday as well. The SPDR Dow Jones Industrial Average ETF (DIA) is slightly higher, while the SPDR S&P 500 ETF Trust (SPY) and Invesco QQQ Trust (QQQ) are both selling off as of 1 PM EST.

Stocks, especially tech stocks, are getting spooked once again with the 10-year Treasury yield breaking to new highs after last Friday. The 30-year rate jumped to 2.428% meanwhile, its loftiest level in nearly a year and a half. Higher rates are damaging to the value of future cash flows, which puts growth-oriented companies at a disadvantage.

Wednesday is also an important day for investors and traders, as the Federal Reserve will detail new economic and interest rate projections, which may suggest Fed officials could raise rates as soon as 2023, given the recent developments with the vaccine rollout and declining coronavirus infection rates in some states.

“It is no exaggeration to say that this FOMC meeting has the potential to be the most important one in years as the market is effectively demanding action from the Fed to counter the recent spike in bond yields,” Tom Essaye, founder of Sevens Report, said in a note.

Fed Chair Powell, who often rattles the stock and bond markets with his commentary, could discuss the central bank’s willingness to allow inflation to continue in an effort to ensure a full labor-market recovery.

“There’s this assumption [Powell’s] going to be dovish… With another round of spending, it’s hard for him not to be dovish. They are definitely afraid of scaring the market. They’re afraid of disrupting the recovery,” said Peter Boockvar, chief investment officer of Bleakley Advisory Group.

Meanwhile, entertainment and leisure companies prepare for the next phase of the economic reopening.

Disney stock reversed its earlier losses and added 0.8% after CEO Bob Chapek said that California’s two Disneyland theme parks will reopen at the end of April. The move may have been beneficial for ETFs like the iShares US Consumer Services ETF (IYC), which has lost less than many of the ETFs in that sector Wednesday.