You are at:Home»Featured»ETFs Attempt to Recover after Fed Policies Rattle Markets 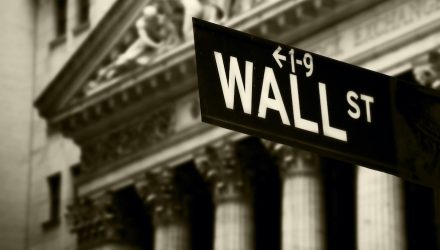 Stocks and index ETFs flip-flopped on Friday, as the Dow Jones Industrial Average, which had been leading the other key benchmarks, fell after the Federal Reserve’s choice to withhold a pandemic-era capital break for banks fueled a spike in bond yields and a decline in financials.

The 30-stock Dow dropped over 0.5%, while the S&P 500 first fell but then climbed 0.19%, after falling further in overnight futures trading. The Nasdaq Composite added 0.78% as investors picked up beaten down tech shares following a large drop on Thursday.

Major stock ETFs are mixed Friday as well. The SPDR Dow Jones Industrial Average ETF (DIA) is in the red, while the SPDR S&P 500 ETF Trust (SPY) and Invesco QQQ Trust (QQQ) are both marginally higher.

The Federal Reserve on Friday elected not to extend a rule expiring at the end of the month that eased the supplementary leverage ratio for banks during the pandemic. The rule allowing banks to retain less capital against Treasuries and other holdings was designed to steady the bond market during the crisis and incentivize banks to lend.

The choice may not be without some negative consequences, according to traders and financial experts, especially if banks retaliate by dumping some of their Treasury holdings. That move could send yields surging even further than they already have, unnerving investors and spooking stocks and index ETFs.

“This is a disappointment to investors that the Fed decided not to extend it,” said Jimmy Chang, chief investment officer at Rockefeller Global Family Office. “There was a lot of expectation, at least a few weeks ago, that the Fed would extend to relieve SLR for the big banks given the need to absorb so much Treasury issuance.”

Bank stocks went red following the Fed’s decision, with JPMorgan, Bank of America, and Wells Fargo all dropping over 3%. Goldman Sachs fell 1.5%. The move sacked the Invesco KBW Bank ETF (NASDAQ: KBWB) as well, with the fund still down more than 1% Friday, after making gains earlier this week.

Meanwhile, bond yields, which had fallen some, popped off their lows after the announcement, as the 10-year Treasury yield reversed slightly higher at 1.74%, just below its high from the prior day.

“The speed at which it came up to this level has been too rapid for comfort,” Chang said. “As yields move higher, it’s harder to justify the elevated valuation.”

As of now, the key stock benchmarks are set to post a losing week with the Nasdaq leading the charge lower. The S&P 500 stumbled 0.9% this week, while Nasdaq lost 1.3%. The Dow fared slightly better, slipping 0.3%.