You are at:Home»ETF Strategist Channel»Yield Curve Trades with Trend and Momentum 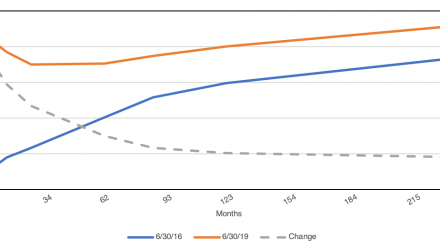 It has been well established in fixed income literature that changes to the U.S. Treasury yield curve can be broken down into three primary components: a level shift, a slope change, and a curvature twist.

Obviously these three components do not capture 100% of changes in the yield curve, but they do capture a significant portion of them. From 1962-2019 they explain 99.5% of the variance in daily yield curve changes.

We can even decompose longer-term changes in the yield curve into these three components.  For example, consider how the yield curve has changed in the three years from 6/30/2016 to 6/30/2019.

We can see that there was generally a positive increase across the entire curve (i.e. a positive level shift), the front end of the curve increased more rapidly (i.e. a flattening slope change) and the curve flipped from concave to convex (i.e. an inverted bowing of the curve).

Using the historical yield curve changes, we can mathematically estimate these stylized changes using principal component analysis.  We plot the loadings of the first three components below for this three-year change.

Therefore, insofar as we believe changes to the yield curve may exhibit absolute or relative momentum, we may be able to exploit this momentum by constructing a portfolio that profits from it.

Why might such changes exhibit trends or relative momentum?

In related literature, Fan et al (2019) find that the net hedging or speculative position has strong cross-sectional explanatory power for agricultural and currency futures returns, but not in fixed income markets.  To quote,

Interestingly, Markowitz et al. (2012) suggest that speculators may be profiting from time-series momentum at the expense of hedgers, suggesting that they earn a premium for providing liquidity.  Such does not appear to be the case for fixed income futures, however.

As far as we are aware, it has not yet been tested in the literature whether the net speculator versus hedger position has been tested for yield curve trades, and it may be possible that a risk transfer does not exist at the individual maturity basis, but rather exists for speculators willing to bear level, slope, or curvature risk.