Yield Curve and Negative Rates: Respect the Message of the Bond Market, but Don’t Panic

Growth has slowed around the world and long-term interest rates have responded. In fact, the 30-year US Treasury rate recently broke below 2%, which resulted in a new historical low. Furthermore, German 10-year bunds are now yielding -0.65% as their economy teeters on recession and there are 13 countries in Europe with negative yielding 10-year debt.

The US bond market believes the Federal Reserve has been slow to react, as a result 10-year Treasury yields have fallen to the same level as 2-year Treasury yields.  Last week, 10-year interest rates briefly fell below 2-year rates causing what the market refers to as an ‘inverted yield curve.’

Why is it important? When bond investors feel like the Federal reserve has raised interest rates too high, or that a recession is imminent, long-term rates can fall below short-term ones, “inverting” the shape of the curve.

When the 3-month/10-year curve inverted back in March, many investors took comfort that the 2/10 curve was still positive. Since that is no longer the case, we thought it’d be helpful to reevaluate our March stance regarding the flattening yield curve, especially in light of increased trade tensions and our belief that the Fed is on the case and is expected to cut rates further in 2019.

WE BELIEVE THE BOND MARKET REFLECTS A SLOWING GLOBAL ECONOMY, NOT A US RECESSION: Although it’s always dangerous to assume “it’s different this time,” we don’t believe investors should consider this new inversion as a signal for an imminent recession. As we wrote back in March, there are a few reasons for this conclusion: 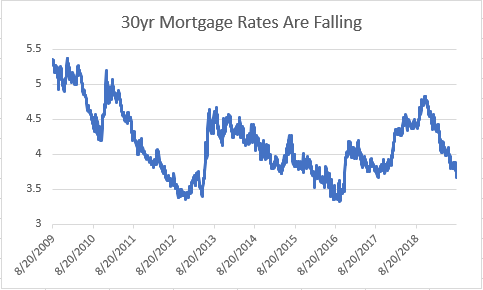 Disclosures: Past performance is no guarantee of future results. Shown for illustrative purposes. Not indicative of RiverFront portfolio performance. Index definitions are available in the disclosures.

RISK MANAGEMENT:  It is always dangerous to assume that “it’s different this time,” and we don’t take lightly the risk that investors will panic as a result of this recession signal. We think the greatest risk of the yield curve inversion is related to investor psychology, which is already fragile due to China trade tensions, the uncertainty around Brexit, and the global economic slowdown. If so, we need to recognize that the yield curve signal might become a self-fulfilling prophecy and influence consumer and business spending behavior enough to usher in the next recession. Therefore, we will continue to listen to the message of the bond market and monitor the way in which it impacts economic growth.

Bottom Line: While we continue to expect heightened volatility for the rest of this summer, we do not believe the US will enter recession ahead of the 2020 presidential elections. As a result, we are not ready to shift our strategy of preferring equities over bonds.