You are at:Home»ETF Strategist Channel»What Could Go Right? One of the Reasons We Recently Put Money to Work 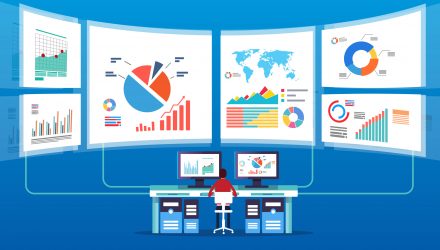 What Could Go Right? One of the Reasons We Recently Put Money to Work

On any given day since 1987, the S&P 500 has risen 69% of the time over the subsequent three months. Investors should never lose sight of the fact that the likelihood of the stock market rising has historically been in their favor. You cannot invest directly in an index.

The U.S. stock market is not the only place where investors find welcoming waters. The table below displays the frequency of the market rising in a three-month period for several of the major markets. We therefore find it ironic that so many investors worry about the ways the market will beat them when the odds have been in their favor, while so many gamblers fully believe that they will beat the casino when the odds are clearly against them.

Given these historical statistics it has generally not paid to be a long-term skeptic; thus, we need to regularly train our brains to look for what could go right and not just what could go wrong. Since we recently deployed 2 – 4% cash into the equity markets and each of our balanced portfolios are now overweight equities relative to our baseline benchmarks, we are focusing this edition of the Weekly View on three things that we believe ‘could go right’. There is no guarantee against losses. 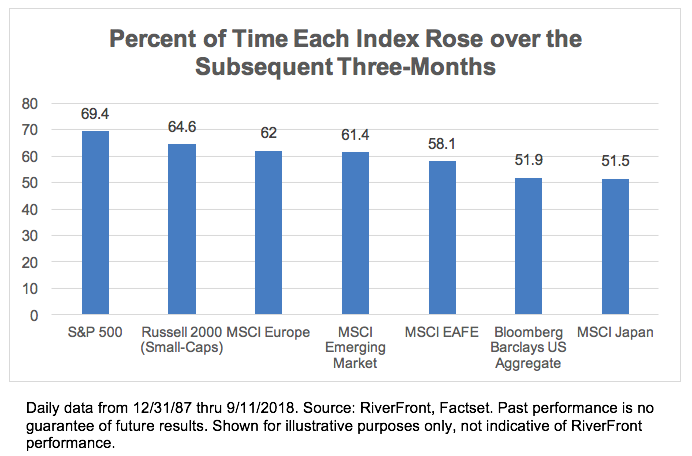 1. DE-ESCALATION/RESOLUTION OF TRADE TENSIONS WITH OUR ALLIES

Traditional trade negotiations that had previously occurred ‘behind closed doors’ are now on display for all to see.  For this reason, it is critical to distinguish between ‘public haggling’ and ‘definitive decisions’. While the rhetoric can sound caustic, we believe that significant progress has been made regarding our trade relations with Europe, Mexico and Canada. For example, a new multi-lateral trade agreement between the U.S., Mexico and Canada is expected by the end of September and a recent Wall Street Journal article noted that Canada was willing to concede on the remaining hurdle (protections for their dairy industry).  Recent trade discussions with Europe have also been encouraging. In late July, European Commission President Jean-Claude Juncker and the Trump Administration agreed, in spirit, to work toward zero tariffs between the U.S. and the EU.  Any resolution or additional evidence that trade discussions with our allies are progressing would be welcomed by the market and remove one of its biggest worries.

As a side-note, while we do not expect U.S.-China trade relations to be resolved in the near-term; we were encouraged that the Trump Administration reached out to China last week to schedule the next round of discussions and that the Administration is rumored to be considering a lower initial 10% tariff level, than the 25% threat proposed earlier this summer.

2. U.S. ECONOMY AND EARNINGS CONTINUE TO CONTRIBUTE WITHOUT FANFARE:

At the end of the game it is about the score-board and not the statistics (hits, strikeouts, etc.).   In other words, an ugly win is better than a graceful loss.  From that perspective, the U.S. economy and American companies have been steadily putting points on the score board without much fanfare.  Earnings and profit margins are near all-time highs, wages are starting to grow and the NFIB’s Small Business Optimism Index is at its highest levels since the survey began 45 years ago (see chart). Unfortunately, the ‘slow and steady’ nature of the post-crisis recovery has meant that many of these accomplishments were achieved in a non-dramatic fashion and/or were overshadowed by geo-political events.  Ultimately, we see additional upside to the U.S. stock market as investors direct their attention toward the scoreboard and away from the ‘crisis of the day’; 3rd quarter earnings reporting season which begins in October may be a catalyst for that attention shift, in our view. 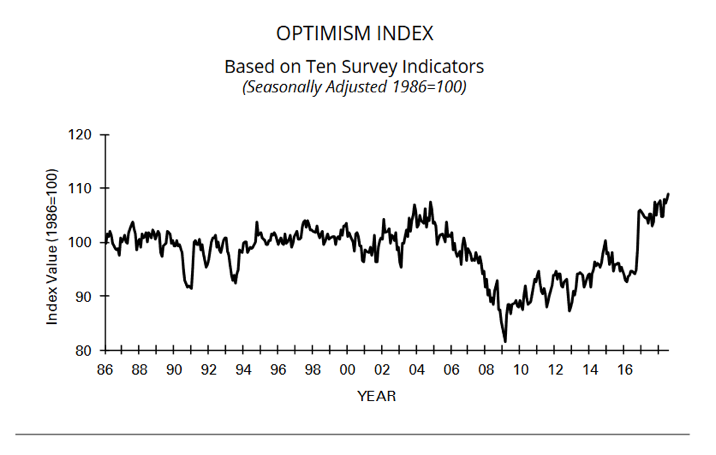 Every few years an economy gets a ‘shot across the bow’ that causes it to make difficult but necessary changes or continue down a path that leads to an unacceptable outcome.  It was just such a ‘shot across the bow’ that led me to this industry over 25 years ago.  Despite having an accounting degree, there were simply not enough accounting jobs available in the ‘jobless recovery’ that followed the 1991 Recession.  The reason jobs were not being created owed to the fact that the U.S. lost its global competitiveness and ‘Made in America’ was no longer a source of pride but a symbol of low quality and high cost.  Back then it was Japan that had the ‘tiger by the tail’ and to put it bluntly, American companies and workers had to change the way they did business or learn to speak Japanese.   Our country’s decision to reform our labor markets and supply chains, despite the inherent uncertainties and difficulties, led to nearly 30 years of economic progress and U.S. stock market appreciation.

We believe that such a ‘shot across the bow’ was fired at Europe and Japan in recent years and European and Japanese companies and workers have had to make those same difficult decisions.  In our view, that change process has begun and includes significant labor reforms in France and Spain, stronger pan-European oversight in the banking industry, greater fiscal conservatism in Ireland and Greece, and government mandated return on equity (ROE) targets that have contributed to record-high profit margins in Japan.  If these early indications are a sign of the types of changes that are beginning to take root, then the developed world may be getting the ‘make-over’ it so desperately needs and that investors have not fully appreciated.

These views are current as of September 17, 2018 and are subject to change.