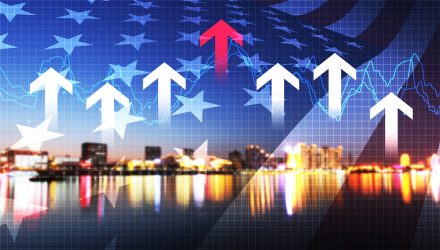 The U.S. economy continued to improve its outlook in July, with GDP expanding +4.1% in Q2, the fastest pace in nearly four years. Taken in nominal terms, GDP rose +7.4%!

While real GDP growth of +4.1% growth did miss market expectations for +4.4% growth, it was an improvement on the first quarter’s +2.2% pace.

One potential blemish from the report was a sharp uptick in exports, with a surge in soybean exports due to recently imposed tariffs.

Consumer spending was robust, and business spending remained elevated. A change in private inventories was actually a negative contributor, which could in turn be a positive in Q3 as businesses restock.

Consumer sentiment remains robust, with the Conference Board index of consumer confidence rising to 127.4, from a revised 127.1 in July. The most recent jobs numbers released in July showed unemployment rising to 4% as more people entered the labor force. Average hourly earnings rose +2.7% Y/Y, which was a continuation of a trend towards higher wages. Personal Consumption Expenditures rose +0.4% M/M in June, with personal income also rising at a +0.4% M/M rate. All in all, the personal savings rate was unchanged at 6.8% in June.