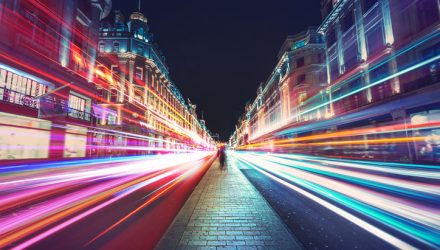 TECHNOLOGY: THE UPSIDE AND DOWNSIDE OF CREATIVE DESTRUCTION

The speed at which technology has changed the way we live has been nothing short of remarkable. Consequently, the old methods of measuring growth and productivity probably do not fully capture tech’s dynamism. Tech has created both opportunities and concerns for investors and for society.

Just within the last decade or so, smartphones, video streaming, and cloud services, to name but a few, became mainstream, resulting in tremendous value for consumers, businesses, and their shareholders while uprooting rivals in the process. The net result is that currently the five biggest companies of the S&P 500 are technology companies.

The embracing of technology by consumers and businesses in the last 10 to 15 years has been reflected in drastic changes in private investment. Since 2004, investment in ‘Intellectual Property Products’ has caught on and now significantly exceeds investment in ‘Structures’ – sometimes referred to as ‘brick & mortar.’ Furthermore, as our chart above shows, investment in structures is lower now than it was in 2000, whereas investment in technology has risen 2.5-fold. We think it is also remarkable that technology investment barely slowed down in the 2008-2009 recession and was at a new high by 2010. 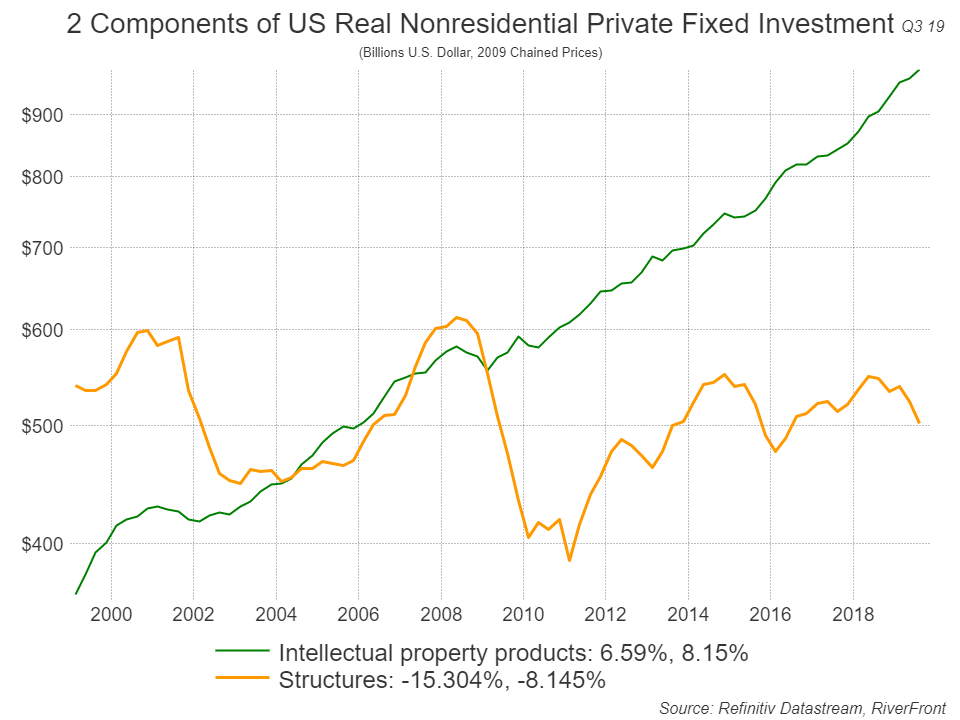 Shown for illustrative purposes only.

HOW DO WE MEASURE TECHNOLOGY’S IMPACT ON THE ECONOMY?

Despite its profound impact, there has been little change over time in the way productivity and growth are measured by economists. By traditional measurements, productivity in the last 7 years has been roughly half the levels of those experienced 20 years ago. Given the huge strides in technology, intuitively this does not seem to make sense.

Productivity measures, which along with labor force growth, drive GDP. These traditional measures were initially developed in the post WWII period to try and capture improvements in manufacturing and represent the number of units produced relative to hours worked. Thus, productivity rose when more units were produced by the same number of people. ‘Units’ are easy to measure on an assembly line or by the number of goods sold in a store, but in a service-oriented economy it can be much more difficult. For example, consider the challenges in measuring the productivity of a doctor’s visit. Now, due to these measuring issues, the widely-used metric of productivity simply divides the size of the economy (GDP) by the number of hours worked. We believe that even the broadest definitions of productivity fail to properly capture the true drivers of the 21st century economy and the outsized impact the technology industry is having on the inputs and outputs of our country. For example, how do you measure new economy services like a Google search, which has significant intrinsic value but is free to the user? Perhaps US technology dominance is best captured in the revenues and profit margins of US companies, especially the largest ones. Earnings, after all, are what investors tend to be most focused on, and the continued strong earnings of the technology sector help explain the strong returns from US stocks over the past 10 years. We think it also largely explains why US stocks have done so much better in the last decade than international stocks, where very few technology giants have emerged.

Impact on Investors and Society: Positive for Investors, Challenges for Society. Technology’s dynamism has major economic benefits but carries with it some societal costs. We believe it leads to lower inflation, lower interest rates, and longer business cycles. For this reason, we think the technology sector’s weighting in the S&P 500 is justified. At Riverfront we remain excited by the opportunities for investors and the economic growth that technology provides. Our strategies are tilted toward the sector, especially the software and services subcomponent. Each company needs to be evaluated on its business model, sustainability, and the valuation being paid by investors. As the late 1990s showed so clearly, great companies can be poor investments if valued too highly. While we acknowledge that some may believe valuations for the sector are full, we believe a premium is justified at this time given the recurring nature of earnings and revenues within software and services.

Impact on Inflation: Good Deflation. When technology or innovation gives you a product or service that is deemed by the buyer to be better and cheaper, that is a good thing. Low inflation leads to lower interest rates and thus a lower cost of capital – a virtuous circle of ‘good deflation.’ For example, overall inflation fell during such periods as the ‘revolution’ in the 19th century. Bad deflation, on the other hand, occurs when consumers and businesses are worried and hold-off making purchases causing prices to drop and unemployment to rise. This creates a vicious cycle like those seen in the Great Depression of the 1930s.

Impact on Social: Capital spending on machines or software that replaces humans tends to favor skilled workers and those with the ability, motivation, and adaptability to re-train or reinvent themselves. Thus, some anti-inflation in tech is also wage deflation. Automation often targets lower wage jobs. It also allows folks in higher-end jobs the ability to delay retirement as work can be less hard on the body and healthcare advances lengthen working years. That can delay promotions for younger people, something that has been felt by Gen-X and Millennials. If one has incurred significant student debt in the hopes of achieving higher wages, this is frustrating and demotivating. The suppression of labor in favor of capital is thus part of the dark side of technology for those negatively affected. Although we strongly believe denying, delaying, or disincentivizing innovation has worse economic consequences, failure to include most citizens in its benefits has social and political consequences.

Impact on Politics: The Rise of Populism and Protectionism. Technological innovation has gone hand in hand with global free trade and very low interest rates. This has benefitted higher risk investors and hurt conservative savers. We believe it is precisely those who perceive the 21st century economy has shown little benefit to them that are now rejecting the global leadership style of 1980 – 2016. We believe both right-wing populism (anti-immigration, tariffs and tax cuts) and left-wing populism (increased regulation, wealth redistribution, protectionism) are likely to dominate politics until a centrist economic model with broad appeal emerges. (If our labels seem over simplistic, we apologize.) This could take many election cycles across the world. Centrists, who previously dominated politics and by extension bureaucracies are now sidelined. Investors will continue to deal with political uncertainty and potentially big swings in government policy. This has not prevented bull markets in the past but does create significant changes in winners and losers as we have seen.

Bottom line: As long as inflation remains low as we expect, we think stock markets will cycle higher with earnings, and bonds will offer low consistent returns.

Technology and internet-related stocks, especially of smaller, less-seasoned companies, tend to be more volatile than the overall market.