After one of the lowest volatility environments in history, the volatility we have anticipated for quite some time has finally returned. The result of it? Not much. Markets are pretty much flat on the year, but people are still uneasy.  We thought it would be beneficial to take a step back and discuss more broadly the four-letter word everyone is so concerned about. DEBT.

What’s all the concern about debt?

As we’ve alluded to in the past, we are only one quarter away from the net purchases of assets by the US Federal Reserve (“Fed”) and the European Central Bank (“ECB”) moving negative, and the drop will increase further in the fourth quarter.  According to the International Monetary Fund (“IMF”), there is $164 trillion dollars of debt globally. That is equivalent to 225% of global gross domestic product (“GDP”). Of the $164 trillion in debt, the US, China and Japan make up about half of that. China’s debt load has grown from $1.7 trillion in 2001 to over $25 trillion. China’s debt growth has accounted for 3/4ths of the private sector debt rise over the past decade.

Looking at gross government debt as a percentage of GDP, only Japan (236%) and Italy (131%) have higher ratios than the US (108%). Furthermore, we are the only advanced economy with expectations of increasing this ratio over the next 5 years, reaching 117% in 2023. 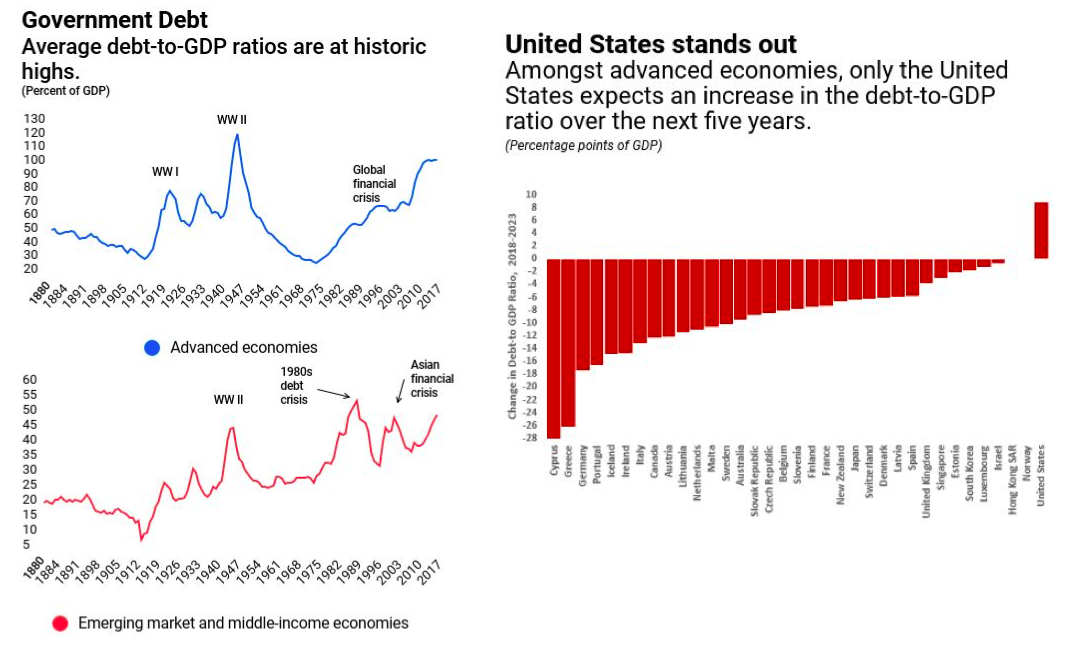 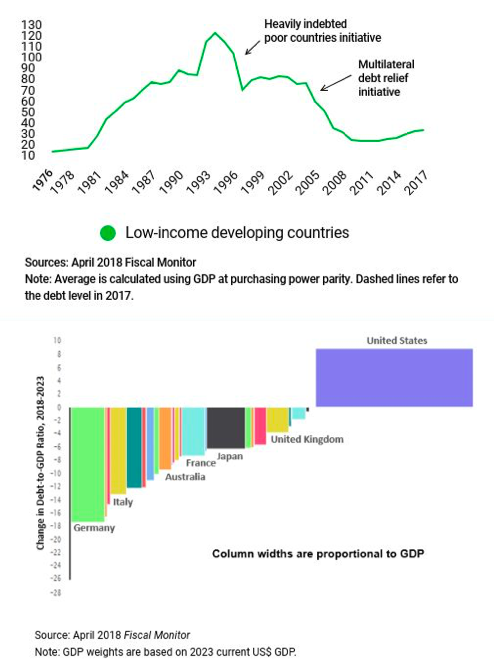 In the right chart, you can visualize how big of an impact the US portion is relative to the other economies (column widths are proportional to size of GDP).

The SPDR S&P 500 ETF (SPY) returned -0.77% in the first quarter. Growth outperformed value by a staggering 5.49% in the first quarter, which continue to benefit from the growth of FAANG (Facebook, Amazon, Apple, Netflix and Google). Small caps outperformed both for the first time in a while, returning 2.64% benefiting from the tax plan. The US unemployment rate reached 3.9%, although driven more form people leaving the potential workforce and not as much from increased employment. Despite the tight employment market and growing inflation (CPI came in at 2.4% YoY) we still haven’t seen any significant wage growth. One theory for this is older participants are retiring while millennials are being hired at a fraction of their cost, putting downward pressure on average wage data. Inflation without wage growth

The MSCI EAFE Index returned -1.72% in the first quarter. Valuations remain exceptionally cheap relative to US equities. The euro rallied at the start of the year but has retraced some of its gains as of late. Even with the rise of the euro, international developed equities still underperformed domestic equities.

The MSCI Emerging Markets Index returned 1.15% in the first quarter. We continue to expect upside returns from this space if markets continue to rally. We are focused on investments excluding state-owned enterprises, ones connected to the internet of things, and frontier markets within this asset class. Any protectionism actions taken by the US or China seem to be hurting the US dollar and in turn creating opportunities in emerging markets. Similarly, to international developed market, emerging markets have favorable valuations compared to US equities but are no longer a discount to international developed.

The iShares Core US Aggregate Bond ETF (AGG) returned -1.49% in the fourth quarter, while the iShares Barclays 20+ Yr Treasury ETF (TLT) returned -3.38%. The Federal Reserve raised interest rates by 0.25% in March, and the market anticipates two more quarter point hikes during 2018, which would bring rates to 2.00-2.25%. 10-year treasuries flirted with 3% in April. Some are calling for 6% 10-year yields within a few years, while others are calling for a full yield curve inversion.

With the increase in volatility, many have looked to alternatives to weather the market storm as equity performance has been mixed and bonds have been slightly down. Oil has begun to spike reaching as high as $70 dollars, a sign the market is in the later stages of an expansionary period. The SPDR Gold Trust ETF (GLD) returned 2.01% for the quarter, while commodities, measured by the PowerShares DB Commodity Tracking ETF (DBC) gained 1.88%. The first quarter was not kind to cryptocurrencies, with Bitcoin loosing almost 50% and Ethereum losing 47%, although both have begun to rebound nicely in the second quarter. 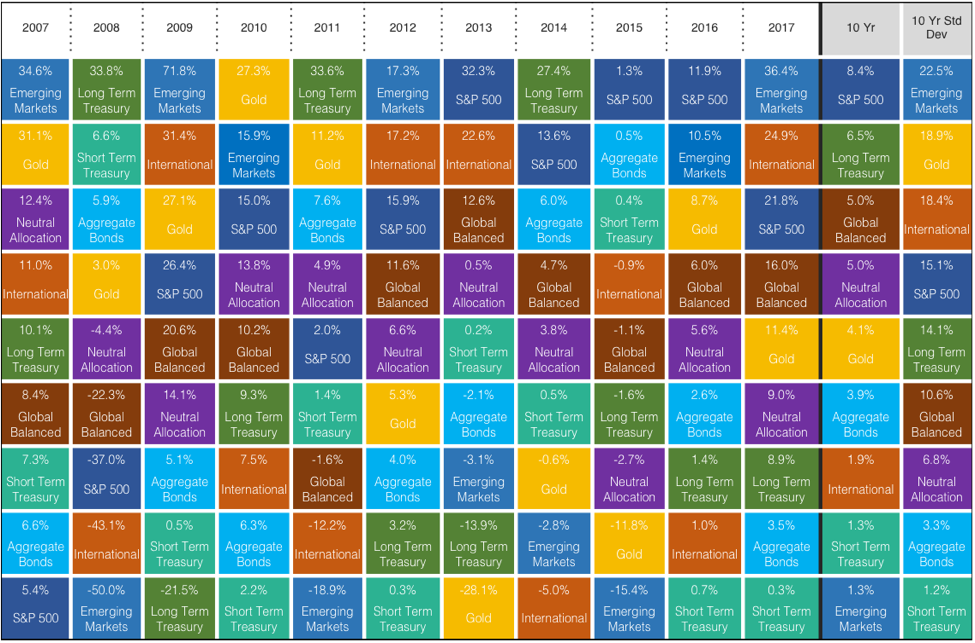 We are 8 years and 9 months into the current US expansion defined by GDP, or 35 calendar quarters of growth.  There have been only 3 other expansions lasting more than 25 quarters, and that was 35 quarters ending in 1970, 32 quarters ending in 1990, and 40 quarters ending in 2001. This expansion is definitely long. So, two signs that often precede a recession by 6 to 12 months are increasing commodity prices and widening credit spreads (the difference in yield between riskier bonds and treasury bonds). We have seen a rise in commodity prices but credit spreads have only expanded modestly. Many of these risks have existed for years, and this is not a call for action to overreact. Timing markets is a fool’s game that almost always ends poorly.  We remain committed to our goals based approach by building a core wealth preservation strategy and adding income or growth based up one’s personal risk tolerance.