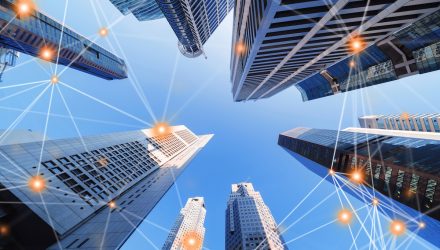 U.S. equity performance has consistently been amongst the top of all developed nations over the last decade. Going back to The Great Recession, the S&P 500 has outperformed international developed market indexes such as the MSCI EAFE by a large margin. In fact, the U.S. has had higher annual returns than any other developed economy three times during this extended bull market. That being said, recent stock sell-offs, increased volatility, and high valuations in the United States all make the international markets an appealing option for investors right now. 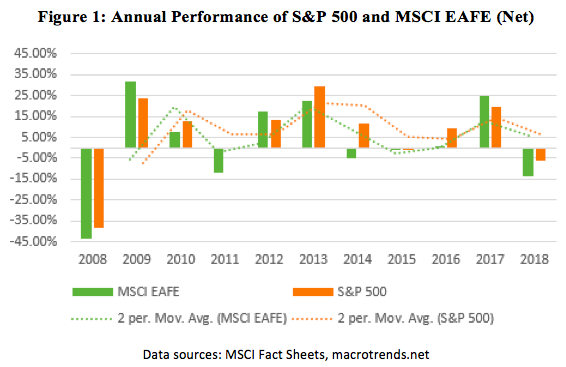 Apart from geographical diversification, adding exposure to the international markets makes sense from a value perspective. EFA, the Blackrock ETF which tracks the MSCI EAFE index, has an average P/E ratio of about 13.29. This is around 25% less than the amount that investors in exclusively domestic large-caps have been willing to pay for each dollar of company earnings on the S&P. 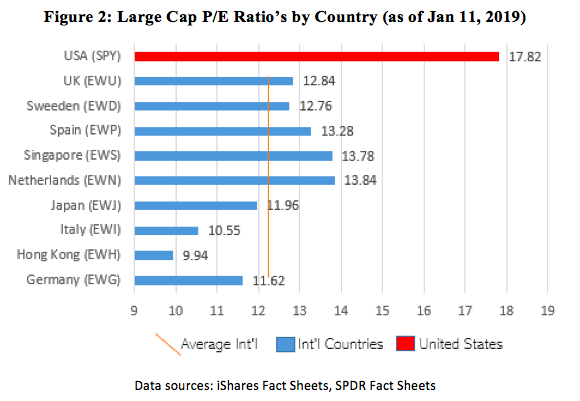 Any investment has elements of risk associated with it. While investors may have traditionally tried to contain their sphere of risk by being over-weight in equities that lie close to home, today’s global economy prevents such measures from being entirely effective. Evidence of this reality rests in the events that dominate the current news cycle. Take the slope of the yield curve, which has commanded a lot of attention as of late for its flattening. While Federal Reserve actions have been responsible for rising rates on the near-side, pressure from other developed countries like Germany, Spain, and Japan that yield far less than the U.S. 10-yr are driving up prices and thus decreasing yields on the far-side. Outside the world of fixed income, investors are seeing the impact that international issues such as trade agreements, Britain’s exit from the EU, and global debt are having on U.S. companies. These factors suggest that increasing exposure to equities outside the country may be a good way to participate in the potential gains inherent with such uncertainty, especially when the uncertainty is affecting U.S. markets anyway.

If investors are leery about changing their portfolio composition, examining the difference in performance between active management in the U.S. and abroad might convince them to take a more serious look at the option. It’s no secret that active managers have been struggling to maintain market share relative to passive investment options over the last couple of years. One reason that helps explain this phenomenon is the small and infrequent spread that U.S.-based active managers achieve relative to their benchmark. According to data from eVestment, active managers in the U.S. were only able to beat their benchmark 41% of the time over the last five years. That’s in comparison to 74% of managers who beat the EAFE Index over the same time frame. While U.S. markets are highly efficient, international markets have been historically less so (EFA has an average trading volume that’s only about a third that of SPY, the State Street ETF tracking the S&P 500). This presents a terrific opportunity for active managers to find and exploit inefficiencies in the marketplace that may not be present in the U.S.

Recent market volatility has spooked many investors, so a tactical international equity strategy with strong downside risk management like the Julex Developed Markets may offer a good solution for investors who are looking to increase their exposure to international markets. The strategy aims to participate in the international space and also maintain the flexibility to exit or decrease its exposure depending on the general health of different regional economies. The rules-based investment process used in the tactical ETF strategy is part of the reason why the portfolio has performed exceptionally strong compared to the MSCI EAFE Index (net). Since its inception in June of 2016, the Dynamic Developed Market Strategy has outperformed EAFE on a gross basis by 5.82% annually through December 31st, 2018. Maybe more importantly, the strategy avoided last year’s market downturn by maneuvering out of the market.