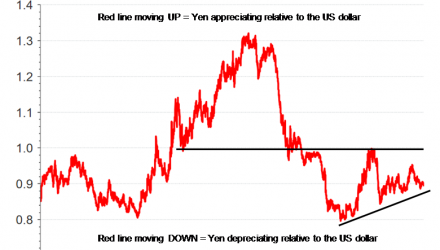 Most U.S. citizens could be forgiven for not bothering to pay close attention to foreign currency (FX) fluctuations. With the U.S. dollar being the world’s ‘reserve currency,’ we enjoy the luxury of broad acceptance of our greenbacks. Other than perhaps in vacation planning, thinking about FX may seem like an esoteric exercise.

However, for investors, not having a view on the dollar can create blind spots, in our opinion. Movement of ‘the Almighty Dollar’ often has outsized effects on many asset classes relevant to investors, including international stocks and commodity prices. This year is a prime example: the strength in the dollar versus most foreign currencies (see year-to-date moves in chart below) has helped contribute to the acute weakness experienced in international investments, particularly in some emerging markets where dollar strength can cause sharp increases in debt obligations; that Argentinian or Turkish dream vacation is looking awfully cheap right now.

An ancient Danish proverb (or was it Yogi Berra?) stated: “predictions are hard…especially about the future.” Nowhere in investing is this perhaps more apt than in currency analysis. There are several methodologies used to try and predict future FX moves…all with sound logic but spotty efficacy, depending on the currency in question, the economic regime, and the timeframe. 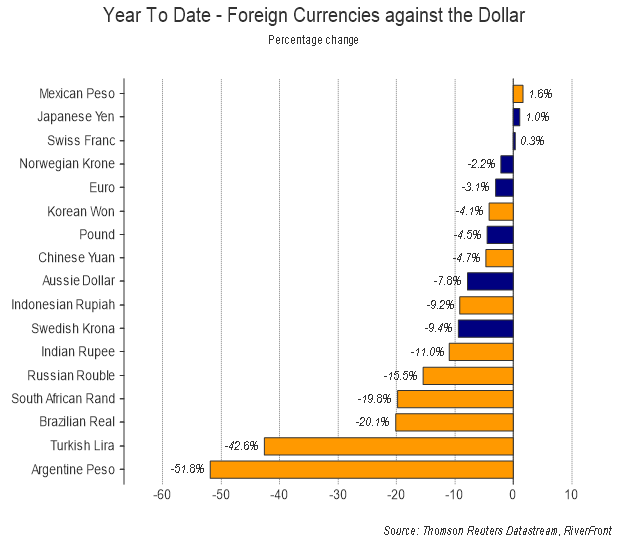 We fully acknowledge the difficulty in using any one technique to consistently predict currency movements; rather, we believe in a ‘mosaic’ approach that uses both quantitative and qualitative inputs to inform an overall view. Our mosaic is based on three pillars: long-term valuation, relative economic fundamentals, and technical analysis. Today we’ll demonstrate why the dollar looks to be near an intermediate-term high, in our opinion. Thus, we are currently choosing not to hedge significant amounts of euro (EUR), British pound (GBP) or yen (JPY) exposure in RiverFront’s various portfolios.

Most theories of how to assess long-term fair value in FX are based either on a version of purchasing power parity – the idea that identical goods should cost the same everywhere, with currency fluctuation eventually equalizing imbalances – or interest rate parity, the idea that a return on a bank deposit should be the same everywhere, and thus where interest rates are higher, the currency should depreciate to equalize total return.

The real world, of course, is more complicated than that; there is no such thing as perfect fungibility in currencies given differences in macro fundamentals (discussed below). However, while we acknowledge that valuation is admittedly a blunt tool and not necessarily a timing signal, we think it’s notable that by many of those approaches, the pound, Euro and yen now appear ‘cheap’ relative to the U.S. dollar. Using purchasing power parity, for instance, all three currencies appear between 10-20% ‘cheap’ to the dollar (source: NDR Research, 9.6.18). Other approaches, such as Goldman Sachs’ GSDEER methodology, which uses relative inflation, productivity, and terms of trade as primary inputs, indicate very similar levels of overvaluation for the USD (source: Goldman Sachs, 9.5.18).

This extended valuation comes after a seven-year rally in the dollar that now may be appearing ‘long in the tooth’ compared to other historical rallies, as evidenced in the chart below. From July 2011 until now, the U.S. dollar has averaged over +3% a year; this marks the longest dollar bull market since the U.S. left the gold standard in 1971, if not the most powerful. In fact, while shorter-term technical patterns in the major foreign currencies are mixed (see Technical section on page 3), we believe it’s possible that the recent pattern of lower lows made later in ’17 might render 2018’s rally simply a counter-trend ‘last gasp’.

Macroeconomic fundamentals would, at first blush, seem to strongly favor the U.S. dollar over other major currencies. Given ultra-low rates overseas, interest rate differentials are still more attractive in the States. In addition, the U.S. economy clearly still holds the title of strongest and most productive, judging by data such as the recent Purchasing Managers’ Index (PMI) reading and last quarter’s GDP growth.

However, currency markets attempt to discount future changes in fundamentals at least as much as the current state of fundamentals; in this regard, it’s possible that the U.S. economy is about as strong as it can get in this cycle, a theme we touched on last week’s Weekly View (9.3.18, “Consumer Confidence – As Good As It Gets?’). Inflation is one item that could eventually cause issues for the dollar; with U.S. core-CPI running at nearly 2.4% and headline inflation at 2.9%, the market may start to price in a weakening of the relative real rate attractiveness for the U.S. going forward, damaging dollar sentiment.

In addition, political uncertainty may be increasing in the U.S. It’s our belief that headline political risk factors are more priced into currencies like the pound with Brexit concerns and the euro with Italian political issues, as well as many emerging market currencies, than with the dollar. An increase in political uncertainty in the U.S. is not outside the realm of possibility, given controversies constantly swirling around the current Administration. 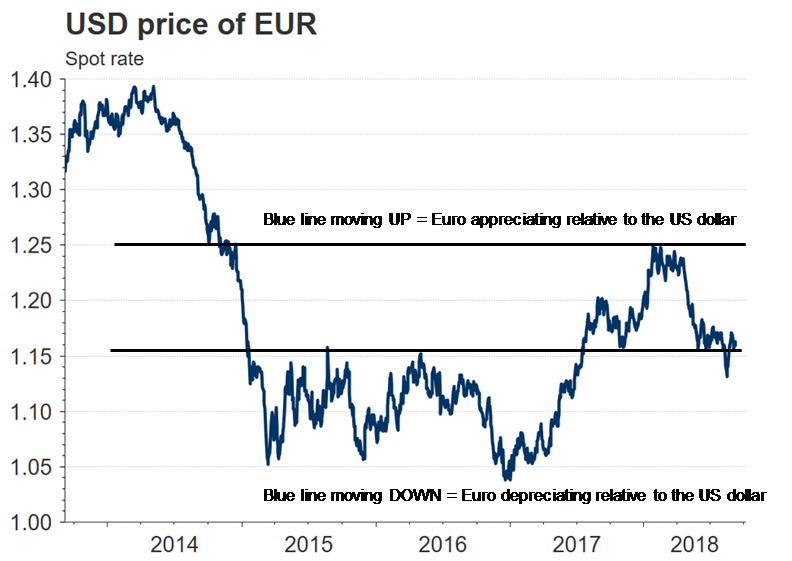 Then there’s the longer-term matter of the U.S.’s twin deficits; with the U.S. running a large budget deficit as well as a current account deficit, and a potential trillion dollar hole in the budget deficit by 2020 (see our Strategic View on 2.27.18 for more on this topic), it’s possible that in the future the market may not still be willing to give the U.S. the ‘benefit of the doubt’ as it relates to the ability to run more fiscally balanced budgets going forward. The historical playbook in FX suggests that most nations’ currencies eventually must pay the price for extended fiscal profligacy.

Technical analysis: FX on lower end of our trading bands

As we mentioned above, we believe the dollar has already seen a good portion of its secular rally, but the technical view in the short-to-intermediate term is more mixed. Below, find our current ‘trading ranges’ (black lines on charts to the right) for the three major currencies we track. As all three are close to the lower-end of their current technical trading bands as we define them, we are choosing to remain relatively unhedged as it relates to our inherent currency exposure in all three cases (source for all three charts to right: Thomson Reuters Datastream, Fathom Consulting, RiverFront; data as of 9.6.18). 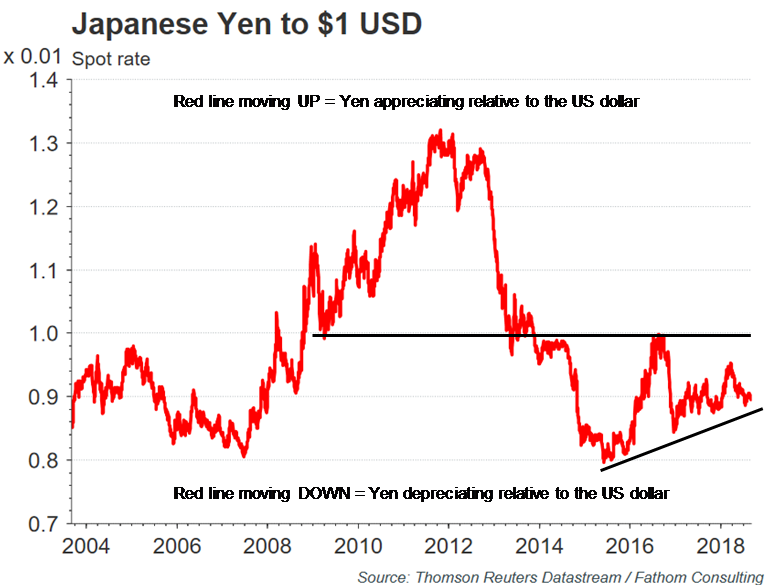 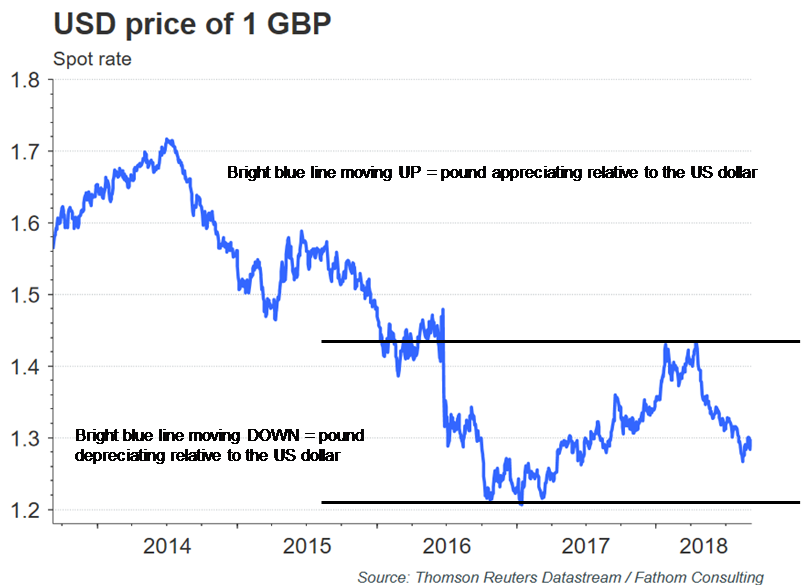 Thus far this analysis has revolved around developed market currencies like the euro. But what about emerging market (EM) currencies? As our performance chart on the first page suggests, this has been a devastatingly bad year for EM currencies, especially in fringe areas with acute problems like Turkey and Argentina.

While we come to a similar conclusion on EM FX valuation as we did for developed currencies, we must admit that the fundamental picture here is much worse; emerging markets FX may continue to depreciate in the near-term given concerns over the fallout for the region from U.S.-China trade relations. The technical picture for most emerging market currencies also appears much more damaged than those for the EUR, GBP and JPY, in our opinion.

Bottom line: Riverfront believes the U.S. dollar may be approaching a secular high

Given the mosaic of valuation and relative fundamentals and technicals, we believe the bull market in the U.S. dollar could be running out of steam. Therefore, RiverFront is comfortable not hedging a significant amount of our foreign currency exposure currently. Our view on FX is subject to change and is colored by the healthy level of respect we have for the difficulty of consistent FX prediction. As always, we remain humble and vigilant to the myriad ways we may be wrong.