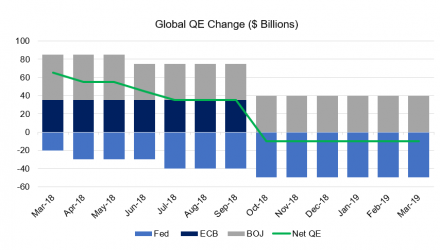 Interest rates have increased dramatically since the end of 2017 and are expected to continue climbing. How can fixed income investors insulate themselves from inherent risks while taking advantage of the opportunities presented by this change in market dynamics? At Sage, we believe the best course of action is to make a strategic shift from fixed to floating rate bonds, such as FLOT and SRLN, which offer benefits that may not be so obvious to investors.

Market dynamics: Why rates will continue to rise

Inflation expectations have in shot up in recent months due to an increase in commodity prices and tightening labor market conditions. With unemployment in the U.S. now below 4%, labor has become scarce, and thus wages should increase. The chart below shows the breakeven rates on Treasury inflation-protected securities (TIPS), used as a proxy for inflation expectations, which are on the rise.

Various geopolitical factors, including conflict with Iran, poor oil production performance from the leftist government in Venezuela, and increased global demand for liquefied petroleum products has caused the price of oil to increase dramatically in 2018.

In addition to these fundamental shifts, there is a large technical factor driving Treasury rates higher. The U.S. Federal Reserve’s Federal Open Market Committee (FOMC) has begun to shrink its balance sheet, allowing up to $10 billion of Treasuries and mortgages to “roll off” each month rather than reinvesting in those markets. The FOMC has been one of the largest buyers of U.S. Treasuries and mortgages, but is paring down assets to $2.5 trillion from $4.5 trillion at the peak. We anticipate that net global quantitative easing, used to support fixed income markets, will become negative by October, as the European Central Bank and the Bank of Japan also decrease their balance sheet.

What should fixed income investors do in a rising rate environment?

It may seem obvious that one would want to invest in floating rate bonds as interest rates increase, because rising rates will cause the coupons of floaters to rise in tandem with nominal rates, while fixed rate coupons will remain the same, causing the price of these bonds to decrease. But there is an additional benefit that may not be so obvious to most investors.