IT’S NOT ABOUT ‘STOCKS VS. BONDS’ BUT RATHER ABOUT FUTURE STOCK MARKET LEADERSHIP

Blame it on poor eyesight, but I can remember watching an entire half of a pee-wee football game before realizing that I was in the wrong place and the child I was watching was not mine. Hopefully, I am not the only one to make that mistake. I was reminded of this recently, because I think many investors are watching a match that they believe is important but missing a far more important contest that is occurring somewhere else.

Over the last 5-months investors have understandably been focused on the ‘Stocks vs Bonds’ match i.e. ‘Will there be a second wave of COVID-19, and should I get in or out of the stock market?’ While we do not dispute the virus’ importance, we believe that COVID-19’s grip on the stock market may be loosening. From here on, the more important contest, in our view, is not whether stocks go up or down, but rather which stocks are likely to lead in coming quarters.

COVID-19 may be loosening its grip on the market:

COVID-19 might be a long way from being cured and its impact to the economy will likely be felt for many more months if not years. However, we see at least three reasons that the stock market has been willing to look beyond COVID-19. First, the ‘policy backstop’ has been tested and appears sound, in our view, as the Fed, Congress, and now the President has supported the economy and the market at varying times. Second, advances in medicine – including promising therapeutics, multiple vaccines in clinical trials, and increases in the capacity of our healthcare system – have provided a ‘light at the end of the tunnel’ that seems to be drawing closer each day. Finally, state lawmakers are becoming more familiar with the controls they have at their disposal and have been able to use the throttle (loosening restrictions) and brakes (tightening restrictions) reasonably effectively to keep outbreaks under control. We believe that the net result of these shifts will be a more ‘normal’ stock market that is driven by multiple factors and away from its singular focus on the virus.

The Real Action May be Taking Place Somewhere Else:

The match we think you should now be watching is currently underway somewhere else, in our view. In this match, an upset could be brewing as the ‘contenders’ are finally making headway against the long reigning champions.

By ‘champions’, we are referring to the secular growth stocks that have been winning since the conclusion of the 2008 Financial Crisis. These stocks tend to share a few of the same characteristics: growth-oriented, US-based, and large-cap. The contenders, on the other hand, can best be described as being either value/cyclical, foreign, or small-cap.

The champions, in our view, are like motorboats. They come in all shapes and sizes but share the common characteristic of having engines that allow them to move under their own power. We could also use the term ‘secular growers’ to describe them. On the other hand, the contenders have no ‘motors’ and are largely dependent on the economic environment for their propulsion, making them more like a sailboat. Strong economic growth creates the ‘winds’ (greater consumption, improving sentiment, increased inflation) that these sailboats harness and move forward at a pace that can often overtake the motorboats around it, in our view. The ‘sailboats’ can best be described as ‘cyclical growers’ for this reason.

Is the Forecast more Favorable to the ‘Motorboats’ or the ‘Sailboats’?

We believe it is still too early to accurately forecast the underlying strength of the economy, especially given the ‘sugar high’ brought on by extraordinary monetary and fiscal stimulus. 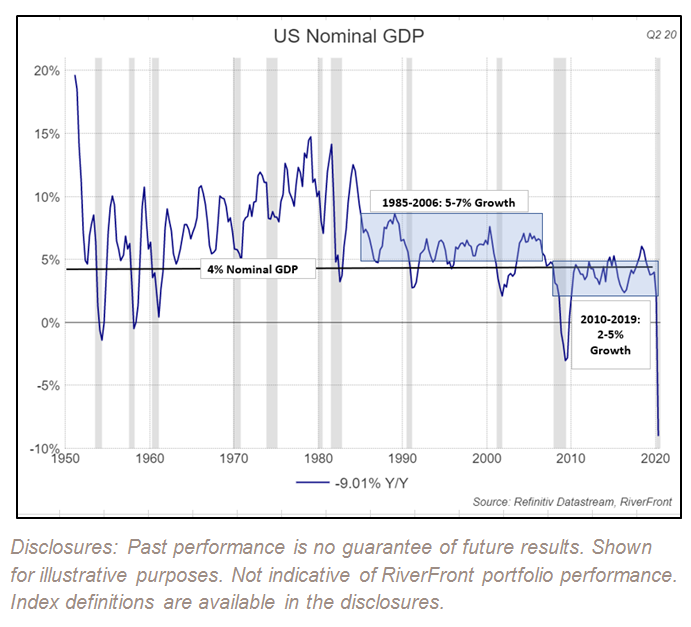 The economy does appear to be strengthening, but thus far that strength appears to lack the lasting power that has historically been most impactful to the sailboats. We believe an economy would need to sustain growth at a rate of at least 4% nominal (including inflation), to generate the ‘windspeeds’ necessary for the ‘sailboats’ to begin winning (outperforming) again. Nominal growth matters more for cyclical stocks because pricing power is important to their ability to grow sales. Following the high inflation of the 1970s, nominal growth was generally between 5% and 7% from 1985 to 2006 (see first box, right chart) remaining above 4% (bold-line) except during the two recessions (see shading). Cyclical stocks benefitted tremendously from China’s explosive growth between 2002 and 2007 as the country rapidly upgraded their national infrastructure as they became the world’s manufacturing giant.

Since the 2008-09 recession, nominal growth has been lower, averaging closer to 4% (see second box); we think this ‘low and slow’ environment is the ‘new normal’ (See our 9/3/19 Strategic View: Low and Slow). Post-COVID-19, we expect US economic growth to average 4% or less and thus struggle to generate strong enough sustained winds for the sailboats to achieve lasting success relative to the motorboats. Rather we expect ‘gusts’ of economic strength from time to time.

The Next Sustained Wind may not Blow for Awhile

To get out of the ‘low and slow’ growth environment, we believe one or more significant catalysts are necessary to push nominal GDP above 4% for a sustained period. In the periods where nominal GDP was above 4%, faster growth led to higher levels of inflation and interest rates, which was also good for the sailboats. Higher interest rates can help the financials, while higher inflation can create a catalyst for companies to spend on capital goods.

Longer term, we see two potential candidates that could create the type of economic growth necessary for the ‘sailboats’ to begin winning again. The first is a potential demographic boom brought on by the Millennials as they replace the Baby Boom generation and enter their prime-spending years. In our view, they alone have the potential to dramatically strengthen the economy for a sustained period. A second candidate is the potential for a significant ‘re-shoring’ trend driven by factors such as the deteriorating relationship between the US and China. Such a trend would cause companies to bring their manufacturing facilities back to the US boosting employment in those industries while also potentially pushing up inflation and interest rates.

Conclusion: Rent the Sailboats, Own the Motorboats

Until there is greater evidence of faster economic growth and the tailwinds it generates, we assume that the recent gusts are just that and will be short-lived. Therefore, our strategy is to rent the sailboats while continuing to own the motorboats.

In our portfolios, we have reduced our overweight to the ‘motorboats’ and added to the ‘sailboats’ over the past few quarters as the economy improved. We have done this selectively by choosing what we believe to be the most agile sailboats, those that can operate with very little wind. Examples include infrastructure companies that we think will benefit from increased government spending. We also like select financial companies that have less economically sensitive businesses, in our view, like trading, or derive their revenues from more stable fee-based business lines unaffected by low rates. A third category would be the cyclical consolidators, like the big energy companies, who we believe have strong balance sheets and can take advantage of the light winds by snapping up their troubled competitors. We will likely remain selective until there is greater proof, in our view, that today’s ‘gusts’ have the potential to be long-lasting.

This article was submitted by the team at RiverFront Investment Management, a participant in the ETF Strategist Channel.

The Nominal Rate of Return is the amount of money generated by an investment before factoring in expenses such as taxes, investment fees and inflation.

To review other risks and more information about RiverFront, please visit the website at www.riverfrontig.com and the Form ADV, Part 2A. Copyright ©2020 RiverFront Investment Group. All Rights Reserved. ID 1305159