Over the long term, measured in years, the investment markets mimic the overall economy. We have seen many periods when the two diverged for a short time, sometimes significantly. And, admittedly, the word short is ambiguous. It could mean weeks, months, or, in some contexts, years. The greater a shift in the economy, the longer it will likely take the markets to accurately reflect the state of the economy. Think of how long it takes room temperature to adjust to a change in the outside temperature. If it drops from 80 to 40 degrees outside in a few hours, it nevertheless takes the room a long time to feel chilly.

Carrying on with this temperature analogy, we can, of course, quicken or slow the pace—or prevent—indoor-outdoor temperature equilibrium by adding heat or air conditioning. And, if you are a New Englander, you might find yourself doing both on the same day. (Don’t judge us. We have cause.)

The “outside temperature” of the investment markets has cooled rapidly (i.e., the shutdown of the global economy), but the government turned on the heat (i.e., through easy money and short-term stimulus). However, as can sometimes happen when you’re freezing, we turned up the dial on the thermostat too high and the “room” (yes, we mean the market) became too hot.

We need to keep in mind that heating a house during the coldest seasons can be very costly. And regardless of whatever the occupants do—wear sweaters, turn up the heat—within months, they will experience better weather. The economy has traditionally acted on a time scale of years, not months. So, we, as a society, need to be cognizant of the cost of keeping the investment markets at an unnaturally high level, if the economy stays soft for an extended period of time.

Currently, we are seeing the government’s furnace providing substantial heat to the investment markets.  Another heat source has been added, however, in the form of mass speculation. The shock the world’s economies were starting to experience in March explains the swift drop in the markets at that time. The initial market bounce in April can be traced to the government’s furnace kicking on when legislators and the fed attempted to offset some of the anticipated chill. The May “heat” appears to have been caused by the speculative accelerant.

One could comfortably conclude that speculation and gambling, not reasoned decision-making, took over the investment markets during May. As many experienced investors—ones who historically have offered considered and calculated opinions on investment opportunities and risk—moved overtly toward cautious and uncertain assessments, speculators new to the markets took over the pricing of assets.

From our readings, this speculation is best exemplified by the sports gambler and media mogul, Dave Portnoy, founder of Barstool Sports. He has amassed a large following on social media as he turned from gambling on sporting events to day-trading investment markets. In one of his many rants about how easy investing is, he stated, “I’m the new breed.  I’m the new generation. There’s nobody that can argue that Warren Buffett is better at the stock market than I am right now. I’m better than he is. That’s a fact.” And “I’m the captain now.”

One of Portnoy’s followers remarked, “I kind of make fun of some of these investors [referring to Buffett]. They just have a hard time understanding the new normal, the new business models.” This attitude—which in our perspective is a show of hubris and hubris’s corollary, not learning from the past—brings into greater relief the concerns about greed we shared in our last newsletter, The Arrogance of the Modern. 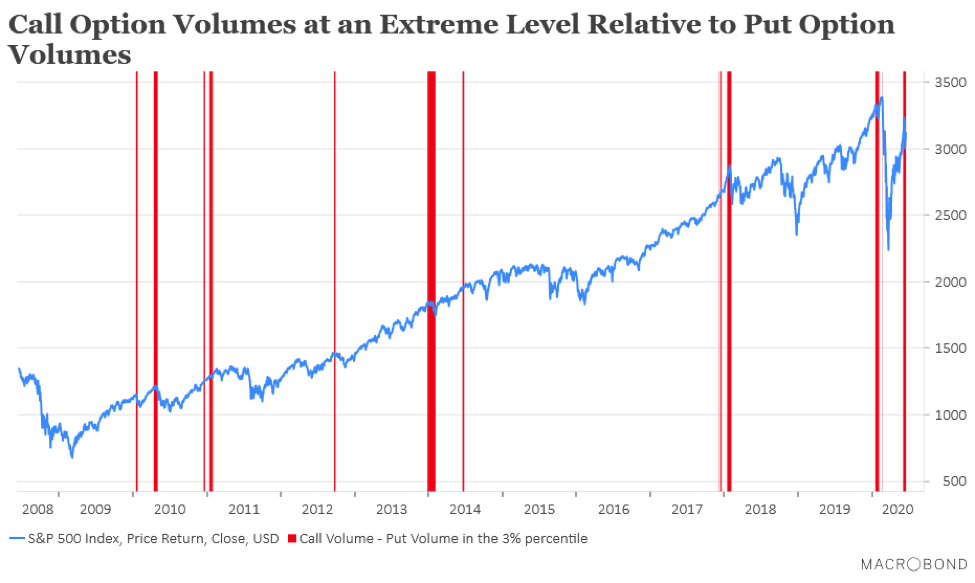 We see this heightened greed in the above chart, which  looks at the difference between two option (derivative) types: (1) call options, which bet that the underlying security rises, and (2) put options, which bet the underlying security falls. With any given security at any given time, one type of option might be more in favor than the other, but, typically, the volume of put options compared with call options are nearly balanced. There are usually close to as many investors protecting their holdings from falling as there are others expecting a rise. However, we know human behavior allows extremes to occur. We are in one of those extreme periods now. The red vertical lines in the chart above denote time periods when the volume of call options minus the volume of put options was so high as to be in the top 3% of historically observed deltas in those volumes. At these times of extreme imbalance, with speculators betting so dramatically that the markets only rise, the ultimate direction of the market is… the opposite. It falls. At least that is what the “old” generation of investors has learned through painful experience.

Think of the current imbalance in underlying option activity as an energy added to the heating system, which can easily be exhausted. Once it wears out, the heat diminishes, and the room temperature begins to drop into the range of the cold outside. Options and derivatives are a form of leverage; it doesn’t take betting too many dollars to significantly impact the price of the underlying asset. Trading options is like lighter fluid: efficient only at starting the fire; you need a substantial fuel source to keep it going.

To sustain the fire, the investment markets will want to see healthy corporate earnings. At present, it is hard to see that in the offing. The forward view on earnings has dropped and the increasing number of permanently unemployed could bring about a new Nor’easter.

As we’ve described, though, the market has held up, leading to the current investment market (as defined by the S&P 500 index) being extremely highly valued. The red line in the graph below shows the price-to-earnings ratio of the S&P 500. The blue line indicates where, along a historical continuum, that price-to-earnings ratio sits. At present, it sits at 95%. In other words, it’s at a level that has been exceeded only 5% of the time over the last 40 years. 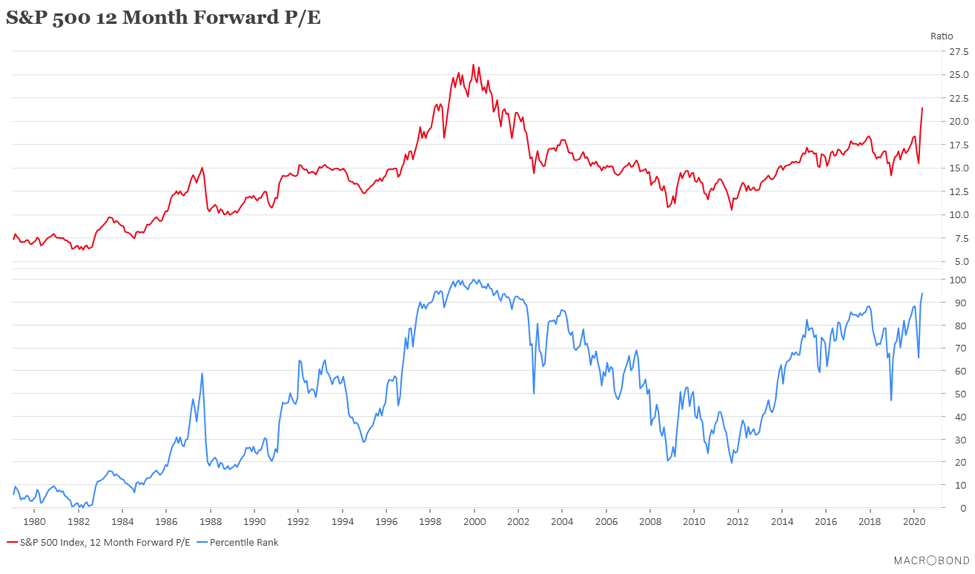 The gravity of the economy today—that rather dramatic drop in outside temperature—will eventually, if not soon, impose a material cooling effect on the markets. The energy and cost of maintaining the hot-market–cool-economy delta will be high, too high for the small antes being placed on the table in the form of mass option trading.

We are seeing this play out already, as sellers overpower the trends and cause significant and violent market adjustments. And if those movements accelerate, or become broader, one can imagine the energy reversing itself, and quickly. (We can count on mass speculation to follow the imminent trend and amplify the move down.) Or destroying the wealth currently being thrown into this fire. Either way, the investment reality, be you a new entrant or an long time investor, will eventually converge with the economic reality.

Mass speculation is not a new phenomenon. We experienced it in 2000 with technology stocks and in 2007 with real estate.  It almost always brings about a confidence that things are different, and the old guard does not understand the new rules to the game. But as one of our clients pointed out just this weekend, the feeling of self-confidence is typically followed by shame.

We sit in a period of heightened uncertainty. We see high confidence and complacency mixed with extreme and, likely fleeting, optimism. Our current cash positioning of over 50% acts as a thick blanket to lessen the impact of the cold, as it seeps inside.