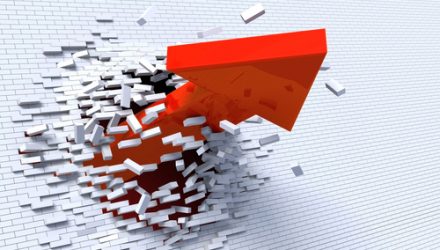 Is Leverage Building to a Breaking Point?

“When you combine ignorance and leverage, you get some pretty interesting results.” — Warren Buffett

Before we look forward, let’s take a step back and review what got us here. The year 2019 can be categorized as a strengthening equity market in opposition to weakening earnings. Many will attribute the durability of this strange polarity to the late-in-the-year trade agreement between China and the U.S., which some people expect to promote a better economic environment. But we aren’t there yet. Instead, we believe this current high-equity-value vs low-earnings polarity is more likely the result of the massive push by the U.S. Federal Reserve to increase liquidity in the financial markets while allowing financial players to increase their bets with borrowed money. (Note: When we mention “adding liquidity,” we mean the Fed is lending money into the system, not giving it. It’s borrowed money that needs to be paid back, typically on short notice.)

The Fed pushed more than half a trillion dollars (that’s trillion with a “t”) into the system in the last three months of 2019. This intervention is truly uncharted territory. When the liquidity scare arose in early September, the Fed came to the rescue, pumping money into the system. But it wasn’t enough, and the Fed had to push even more liquidity into the system in December. What did the Feds see that caused them to react so dramatically? And, what unintended consequences did those actions create?

Giving us some confidence in the Fed’s impact is the fact that all risk assets experienced an upward revaluation in the face of continued softening in economic activity. You typically do not see all assets pricing up at the same time because generating the money to buy an asset typically requires selling another. Though it’s not truly a zero-sum game, in the short term, it is—unless purchases are being funded with leverage. 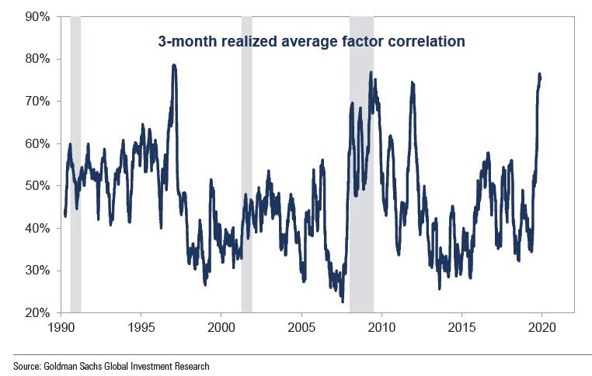 Think back to 1998 and the hedge fund Long Term Capital Management (LTCM), which—along with some other firms—was making calculated investments bets using overnight loans to place ever-increasing size bets. They felt comfortable with leveraging their capital 30:1 (i.e., they used one of their own dollars and $29 in borrowed funds to purchase every $30 in assets). Of course, when they started losing bets, that leverage ratio jumped to 100:1 as their principal shrunk. The markets froze, asset prices plummeted, and the ironically named Long Term Capital lost almost all of their capital—more than $5 billion—in short order. During the good times, they had access to liquidity. Once it started to fall apart, no one wanted to lend to them, and Long Term went out of business. (We reread When Genius Fails, the story of LTCM, over the holidays and highly recommend it).

Despite the adage, history does not necessarily repeat itself, and when it does, it’s never exactly the same, but we are witnessing eerily similar acts of leveraged greed today. Hubris plus leverage in an investment firm is a volatile concoction that can affect not only the firm’s investors, but the entire marketplace, just as pulling on a loose thread in your sweater stresses, then unravels, the fabric.

LTCM was envied for its Nobel prize-winning brainpower, inspiring copycat firms to mimic their bets with great false confidence. We are growing concerned as new, “elite” hedge funds catering to the “alternative fixed income” market push their leverage higher. For example, a popular hedge fund, Capula Management, is leveraging $20 billion in funds to make $300 billion bets.

In our minds, this defines fragility. In the case of Capula, and others like them, the vast majority of that $300 billion is being borrowed on a short-term basis. If the lenders’ confidence were to erode, the fund would have to liquidate assets quickly, and it’s hard to see how that would end well. (At the end of this letter, we will highlight recent events that show the pain caused when funds are demanded on short notice.) 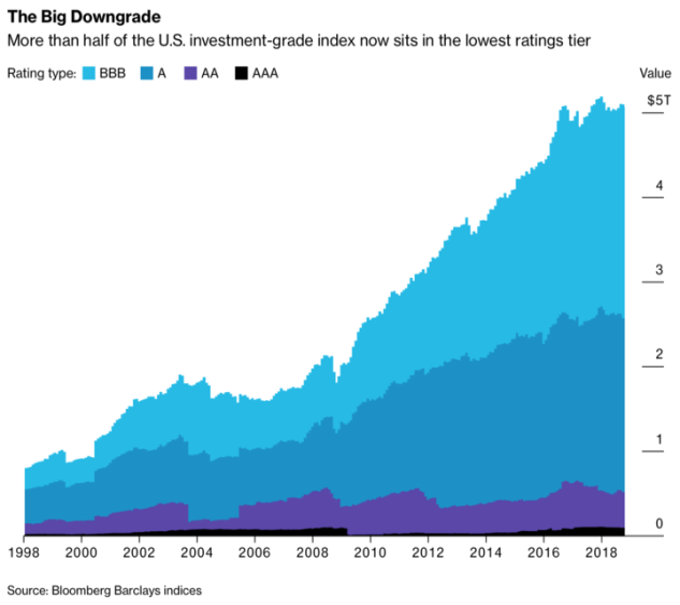 The financial players we’re discussing are typically thought of as belonging to Wall Street. The last two severe recessions started with Wall Street, but then spread to Main Street, the consumers and corporations that are the meat and potatoes of U.S. economic activity. So, while Wall Street has been increasing its dubious bets, it would be nice if Main Street, at least, had been acting as a rational market participant, right?

But no… Corporations around the globe have increased their own liabilities as they take advantage of low interest rates and respond to the investor demand for fixed income. The amount of investment-grade debt (i.e., typically, the debt from healthy, large, profitable companies) has doubled since 2007 in the U.S. It is also larger, as a percentage of GDP, than it has ever been. And, the type of this debt that has grown the most is the lowest quality debt, meaning that a weak economy could cause it to drop in status from investment-grade to junk, which would dramatically increase those companies’ borrowing costs, a fresh misery.

Debt is not inherently bad. If used for productive purposes, it is a logical means of funding. Is Main Street using debt logically? Are U.S. companies using it to invest in new machinery and ideas that will produce greater future profits? Not by the looks of it.

Though we are all for stock buybacks—they are a great way to return an investment back to its owners—they should generally be funded with excess corporate profits. Instead, today we are seeing a transfer of capital from one hand (debt investors depicted by the orange dotted line, above) to the other (equity investors depicted by the blue line). Put simply, U.S. companies are using debt to buy back their own shares. 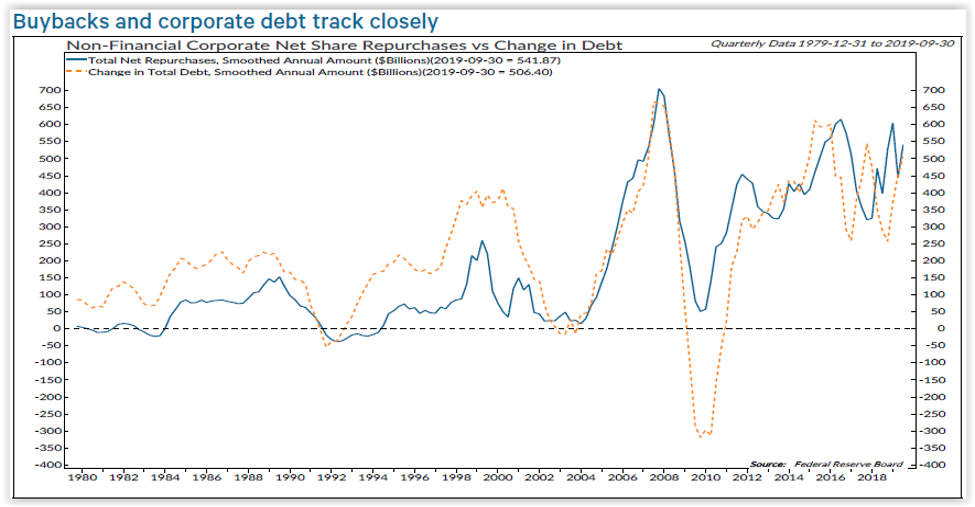 The magnitude of this shift from equity capital to debt capital at large companies is truly impressive. With government bonds yielding so little, investors have an appetite for almost anything with a relatively higher yield, and corporate America is feeding that hunger. What is striking to us is the lack of productive assets supporting the growing debt issuance (i.e., the lack of collateral.) The financial concept of EBITDA, which stands for “earnings before interest, taxes, depreciation and amortization” is how we express a company’s profits before the government or investors get their take. It is a way of looking at the cash generated by a company that can be used to service the stakeholders.

Concurrent with rising levels of corporate debt (that needs to be paid back) has been a decrease in the amount of cash available to service that debt. The amount of EBITDA, as a percentage of a company’s assets, has dropped to a level not seen since the depths of past recessions, when profits were most compressed.

Concerning us even more, the insatiable hunger for yield has “inspired” companies to redefine how they calculate EBITDA, meaning they are making their ability to generate cash look better than it is. In the chart below, we see that when those adjustments are normalized, the level of debt sitting on top of profit is very high. When (not if) fixed income markets become more discerning, the likelihood of corporations getting into funding trouble will increase—and forgiveness will not be in the cards.

Enough of this fear about rising and fragile debt! Perhaps we have seen the weakest part of the earnings cycle? Maybe we are heading into blue skies? Unfortunately, it is hard to be that optimistic, especially with valuations at today’s elevated level. 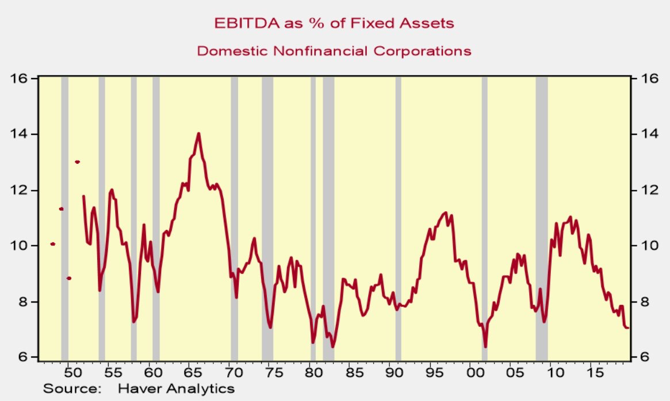 We have stated that market valuations are not a good timing mechanism; they rarely call the top or the bottom of market prices. Instead, inflated-seeming values should be viewed as a risk factor. Much like a stretched rubber band, you can’t know when it will snap based on how stretched it seems, but you can guess how much it will hurt when it does. It’s the same with valuations. We are at a point where, from one perspective, market pricing can be considered extreme, especially as major economic readings continue to deteriorate. 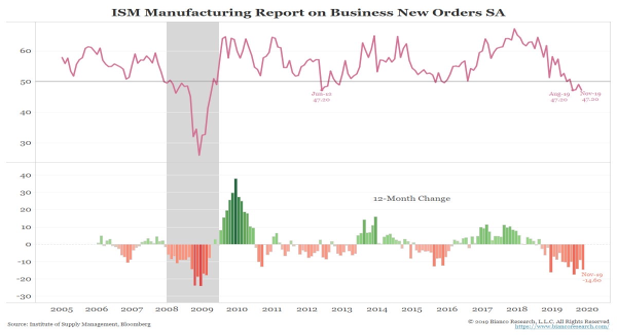 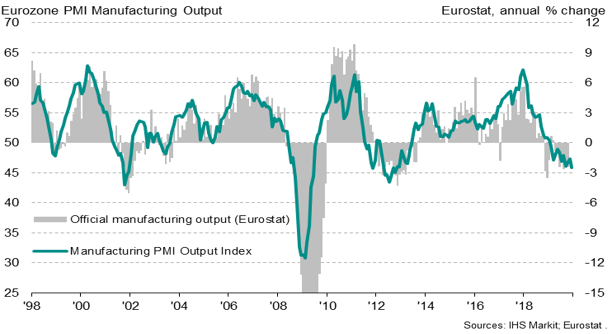 The weakness in manufacturing has not abated. New orders, a good indicator for future economic activity, are steadily declining. Consumer spending is holding up better, true, but the U.S. consumer has always been the last to know. If business activity continues contracting, labor needs will likely decline.

Europe’s manufacturing sector also continued its descent at the end of the year. The indicator of future manufacturing output suggests more pain, not an imminent recovery. And since Europe has not been in a trade skirmish with China, like the U.S., it likewise can’t hope for things to pick up when a trade deal is in hand.

How this all ends in the U.S. is anyone’s guess, but recent events suggest that when the end comes, as it already appears to be ending in some countries, it will not be pretty. We discussed, in 2019, how several European investment funds, faced with significant redemption requests, had to halt all redemptions when they couldn’t sell their assets.  We saw this phenomenon spread to Asia, where Lime Asset Management, the largest South Korean hedge fund manager, was unable to return funds to its investors. (Update: it appears that fund will experience a 70% loss in value upon realization, but the fund still has not stated when they expect to repay what’s left.) The phenomenon has already spread to the U.S.: both York Asset Management and Southpaw Capital have halted redemptions. Much like the Chinese finger trick, it’s easy to put your fingers in, but not so easy to pull them out.

We have been consistent over the past year detailing our concerns of widening cracks in the financial market.  The cracks are not resolving, and the markets are becoming more fragile. We are long-term optimists, in the end, believing in human ingenuity to solve many of life’s ills, but we are also near-term realists, understanding that many of the worst ills are created by the actions of humans.

At Auour, we enter 2020 with high cash levels, aiming to protect our clients’ assets as we see increasing levels of greed mixed with excessive complacency. As we said in November, we think the party’s getting old, so we’re heading for the coat check now, hoping to spare ourselves the hangover that comes with staying up late. Yes, the bartender seems to have gotten a second wind, and someone’s turned the music up, but—to mix metaphors terribly—we don’t want to be the kid without a chair when the music stops. This party may never end…but they always do.