Lessons from a ‘Mid-Century Modern’ Market

What was old may be new again, offering possible clues about the bull market’s next stages

The S&P 500 is on the brink of a cyclical (short-term) bear market, defined as a 20% decline from the previous high. However, we agree with Ned Davis Research (NDR) that it remains in a secular (long-term) bull market, one where stock prices rise at an above-average rate for an extended period and suffer only relatively short intervening declines. Given that history rarely repeats itself exactly, it does often rhyme, and we believe it makes sense to review prior secular bull markets to look for patterns that feel familiar. In our view, the most similar may be the secular bull market, which occurred between 1942 and 1966.  Architects, designers, and fashionable Millennials may recognize that as the ‘mid-century modern’ period, which explains our title.

The 1942-1966 bull market progressed in two stages, as shown in the chart below. The first stage, which lasted 14 years (1942-1956) was defined by high returns where US Large-cap stocks rose from well-below trend to well-above trend. It was also a period of low interest rates. The second stage, where valuations started and ended above trend, lasted 10 years (1956-1966) and delivered more muted returns, as you can see from the chart. It is this second stage that we believe could provide some insight into how the next few years may unfold for US equity investors. 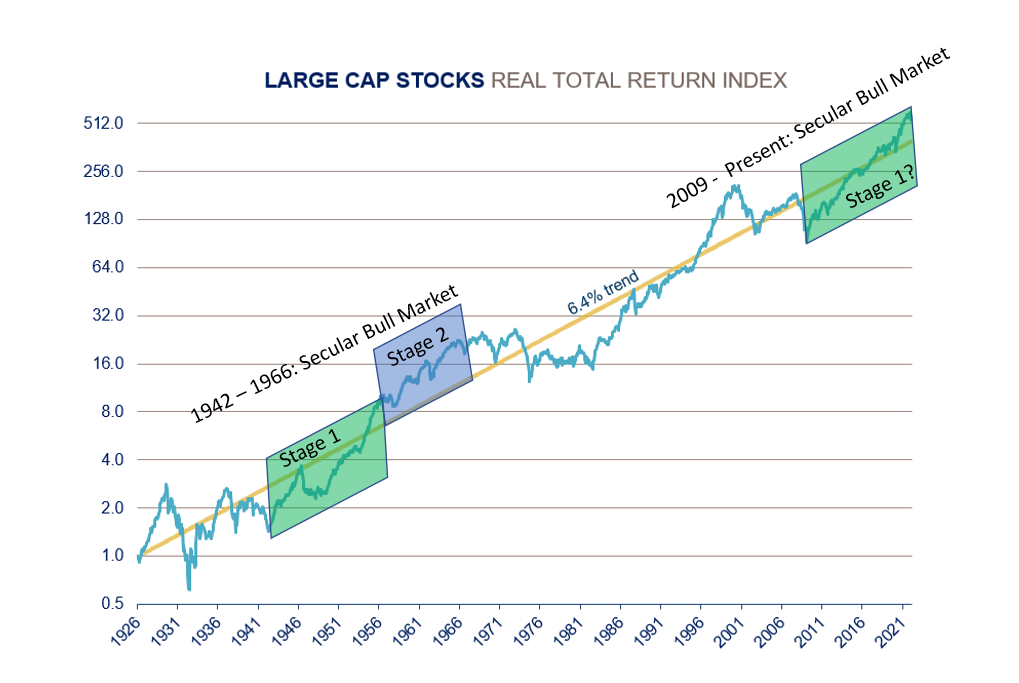 Source: RiverFront Investment Group, calculated based on data from CRSP 1925 US Indices Database ©2022 Center for Research in Security Prices (CRSP®), Booth School of Business, The University of Chicago. Data from Jan 1926 through Feb 2022. RiverFront’sPrice Matters® discipline compares inflation-adjusted current prices relative to their long-term trend to help identify extremes in valuation. Blue line represents the Large Cap Real Return Index. Yellow line represents the Annualized Real Trend Line of Large Cap Real Total Return Index according to Price Matters®. Information or data shown or used in this material was received from sources believed to be reliable, but accuracy is not guaranteed. The chart above uses a logarithmic scale. Line movements will be dampened/subdued based on the exponential y-axis. Chart shown for illustrative purposes only. Past performance is no guarantee of future results.

We believe that there were at least three defining characteristics of that second stage of the 1942-1966 secular bull market that share similarities with today’s investment environment. They include:

It is from history that we can best understand how investors may respond to different market environments.  Perfect correlations are rare, and unexpected factors could create some very different outcomes. However, we believe that the ‘mid-century modern’ bull market can offer some clues as to how the next leg of the current bull market unfolds. Assuming our views are correct, we see three take-aways investors should prepare for.

The comments above refer generally to financial markets and not RiverFront portfolios or any related performance. Opinions expressed are current as of the date shown and are subject to change.  Past performance is not indicative of future results and diversification does not ensure a profit or protect against loss. All investments carry some level of risk, including loss of principal. An investment cannot be made directly in an index.

All charts shown for illustrative purposes only. Information or data shown or used in this material was received from sources believed to be reliable, but accuracy is not guaranteed.

Standard & Poor’s (S&P) 500 Index TR USD (Large Cap) measures the performance of 500 large cap stocks, which together represent about 80% of the total US equities market.

Dollar-cost averaging (DCA) is an investment strategy in which an investor divides up the total amount to be invested across periodic purchases of a target asset in an effort to reduce the impact of volatility on the overall purchase. The purchases occur regardless of the asset’s price and at regular intervals.

For each outcome category (accumulate, sustain, and distribute) RiverFront’s portfolio management team has assigned one or more RiverFront product(s) based on their assessment of the product’s investment objective as it relates to a typical client’s return and risk objectives when seeking investment outcomes of accumulating wealth, sustaining wealth and distributing wealth. The team has also designated RiverFront product alternatives for those clients looking to take more or less risk with the outcome category. The ‘more aggressive’ (or more risk) alternatives will generally have greater equity and international exposure as well as longer time horizon targets, while those designated as ‘more conservative’ (or less risk) will have fewer equities, a lower exposure to international and shorter time horizon targets. Since the risk assessments are dependent on the outcome category selected,

RiverFront products may fall in multiple categories. All investments carry a risk of loss and there is no guarantee that an investment product or strategy will meet its stated objectives.

To review other risks and more information about RiverFront, please visit the website at www.riverfrontig.com and the Form ADV, Part 2A. Copyright ©2022 RiverFront Investment Group. All Rights Reserved. ID 2242673