Its Fun To Participate in a Bubble… Until it Bursts

Last week’s update (Deja Vu: A Tech Bubble All Over Again?) discussed the concept of a bubble.  At the formation of a bubble, you can never be too sure of when the bubble will pop, only that it eventually will.  As a bubble becomes more overextended, the higher the likelihood of a “burst”.

We compared the Nasdaq’s current run to the run it had back in 2000, highlighting its significant strength compared to Value stocks, as well as the S&P 500’s record sector weighting in technology-related stocks.  One stock that has a particularly high weighting in the Nasdaq, and the probable soon-to-be S&P 500 stock, is Tesla (Ticker: TSLA).  Elon Musk’s electric vehicle company has shot to the moon recently, climbing +290% at its high this year alone.

There is no telling when a bubble will burst.  In fact, Canterbury wrote an update that detailed the potential bubble in Tesla back in early February (link to the article: As Tesla Surges, Let’s Discuss the Differences Between Stocks and Companies).  At that time, it did not seem plausible that Tesla could continue its run-up, but it has persisted.  From that article, we showed that stocks are not companies.  While Tesla reported its first full year of positive earnings last Wednesday, its stock has since fallen -14% (Tesla’s current volatility is CVI 416).  Could this bubble be popping? Time will tell, and when it does tell us, it will be quick. 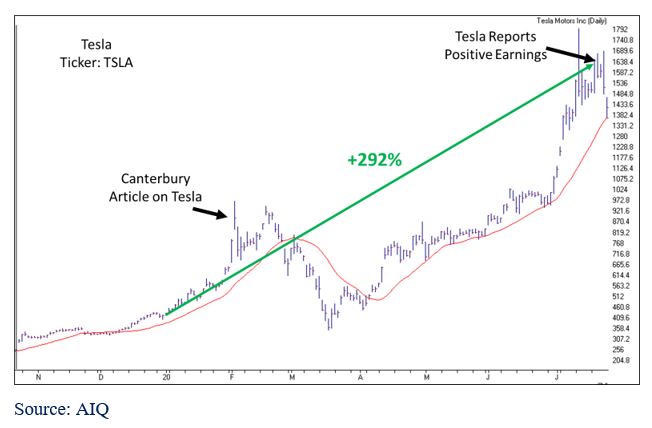 Another Note on Markets

We have received some comments on last week’s important market update. When comparing the Nasdaq bubble of 2000 to the potential bubble forming in the Nasdaq today, it was pointed out that many of the technology companies that existed in 2000 were not reporting profits while their stock prices increased substantially and led the market to crash.

While this is true, and there were so-called “dot com” companies that burst and no longer exist, the vast majority of these companies only had a small impact on the index because of their small market capitalization. The S&P 500 still fell by -50% and large, profitable technology stocks like Microsoft, Cisco, and Intel (all ranked in top 6 of S&P 500 cap weightings) fell by -65%, -86%, and -75%.  These are all large companies that still exist today and were very profitable back then.

As an additional point of emphasis: markets do not often repeat themselves exactly, but they do often rhyme.  As more and more investors develop the sense of “this can’t happen again because XYZ is different this time”, the more likely it will happen again.  Stocks are liquid assets and are driven by supply and demand and the emotions of investors.  Through all the advancements in technology and all the regulations, the one factor that has not changed, and never will change, is human emotion.  Emotional markets are counterintuitive.  Investors typically disregard history and are usually doomed to repeat it.

Just as a quick note, the Nasdaq remains the strongest index, but its relative strength has started to decline over the last 2 weeks.  This is not necessarily signaling an end to its dominance, but it does cause some concern in the short-term.  This coincides with what our Canterbury team has been saying, in that the Nasdaq has had an unparalleled run-up that cannot be sustained.  Technology stocks in the Nasdaq hold a significant weight in the overall US markets, and any weakness in technology could see the markets begin to faulter.

Also, as pointed out by our good friend and expert market technician, David Vomund, AIQ trading expert (a technical analysis program), currently indicates that 93% of stocks are overbought. This is not an end all, be all indicator, but does signal the potential for a market pullback.

Markets remain volatile and uncertain.  Although a market like the S&P 500 is not too far off its February all-time high, it is not in the same economic and business environment as it was back in early February.  That is a dangerous time for markets.  The Nasdaq is experiencing a parabolic advance.  We do not know when that bubble will burst, but when it does pop, comparing yourself to the market will not be a fun activity.

The last few months have been a wild ride in the markets, and the Portfolio Thermostat aims to smooth that ride out by lowering the portfolio volatility by owning securities that have low correlation with each other, including inverse ETFs. If you have any questions about the market research we perform, or the portfolio, feel free to give our office a call.