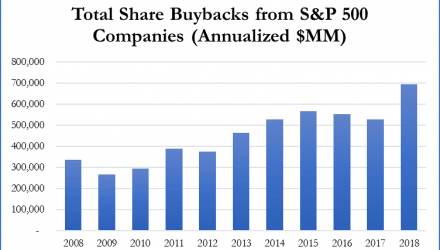 Is the Record Stock Buyback a Troubling Sign for Continued Economic Expansion?

After nine years of bull market, it is not a surprise that stocks have become quite expensive. The Shiller PE, which compares companies’ share prices with their 10-year earnings average that is used to smooth the cyclical effect, is traded at 33, well above the historical average of 16. Trade wars, rising interest rates and inflation add to the worries about market’s health. Investors have become less enthusiastic about buying more stocks. Yet, there is one group buying shares with zest: the companies themselves. 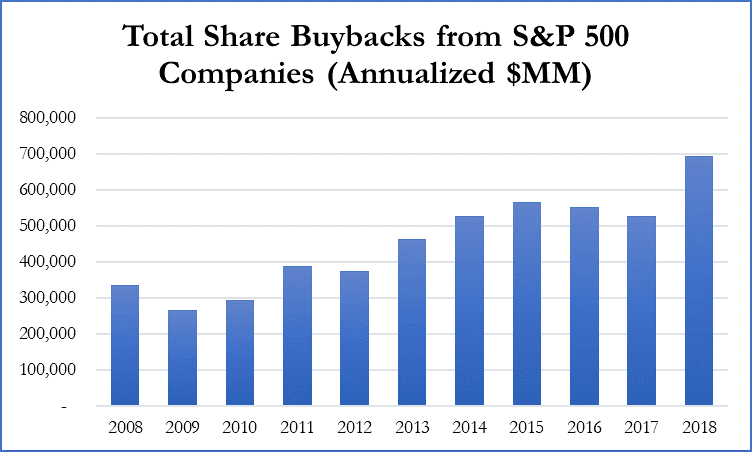 Companies in the S&P 500 Index repurchased $347 billion of their own shares in the first two quarters of 2018, a record pace on track to $700 billion this year (see Figure 1). TrimTabs Investment Research, which tracks all the buyback transactions, estimated that the total repurchases for all US companies could reach $1 trillion this year, a new record.

The Trump tax cut has created a windfall for businesses, especially large corporations. The new tax law reduced the corporate tax rate to 21% from 35%. It also offered a tax break on foreign profit repatriation. A strong economy and solid revenue growth, combined with a large tax cut is fueling record profits. Corporate executives have chosen to use a big part of the cash flow to repurchase shares and reward shareholders.

The long-held conventional wisdom is buybacks are bad for the US economy. The argument goes: although they may boost the share prices in the short term, share repurchases normally hurt the long-term business value and potentially economic growth. Why? Share repurchases may inflate short-term earnings per share, thus increasing share prices for the benefit of short-term traders like hedge fund managers or corporate executives (“short-timers”). However, they may hurt long-term shareholder value by allowing the “short-timers” to take away corporate cash that could otherwise have been invested on R&D, workers, or expansion that could help the continued success and growth of the business.