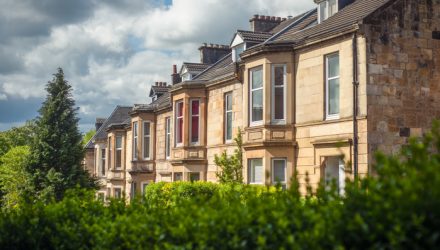 Is Passive Investing the Next Bubble?

Almost two years ago, we wrote a piece on the decades-long trend of passive investing and its impacts on the market. The thoughts expressed in the article are still relevant today as Michael Burry, a prominent subject in Michael Lewis’ “The Big Short,” recently labeled the trend in passive investing a bubble.

In his interview with Bloomberg, Burry touched on two concerns that we previously wrote about: (1) Passive investing may artificially drive upmarket valuations and create a bubble, and (2) Passive investing ignores the fundamentals of each individual stock, which may be harmful to price discovery and create a dysfunctional market. We will examine both of these claims as a follow-up to our original article.

The argument that passive investing has led to unsubstantiated valuations follows one or both of the following premises. The first premise is that if passive investments makes up a larger share of the equity market than active bets, then index prices will lead stock prices instead of vise-versa. The second premise is that investors are poor at market timing and are engaging in herd behavior by piling into stocks at a greater rate than when equities were at a quarter of their current price in 2009.

Burry wrote, “This is very much like the bubble in synthetic asset-back CDO’s before the Great Financial Crisis in that price-setting in that market was not done by fundamental security-level analysis, but by massive capital flows…”

Figure 1 below shows how valuations and total net assets in U.S. equity funds have changed over the last decade. Of note is the current Shiller PE of about 29, which is well above the long-run (50-year) average of about 20. 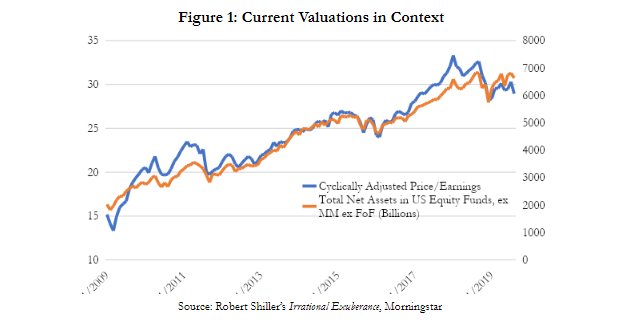 While passive investing has certainly gained an increasing share of the equity market (see Figure 2 below), placing the blame for today’s valuations squarely on the shoulders of passive investing may be misguided as valuations are determined by the total investment in stocks regardless of whether they are active or passive. Instead, we propose that the loose monetary and fiscal conditions of the last decade– namely low borrowing costs, moderate economic growth, and minuscule inflation– have combined to provide a favorable environment for equity investment.

Further, the automatic investments which often fund defined-contribution plans—a staple for many retail investors—creates a distortion in demand since such investments ignore pricing. These two realities would exist regardless of whether or not indexing was a readily available option for investors, so the high valuations we see today can be attributed to bullish sentiment and consistent demand rather than the popularity of passive investments.

The second argument, that passive investing has led to dysfunction in pricing, may be possible in theory, but in practice is lacking evidence. After all, if prices were set completely by passive investing, there would be a strong correlation amongst individual stock prices since investors would buy the whole index at once. But that has not been the case. In fact, a correlation among stocks has actually decreased from its 2012 high.

Figure 3 below shows the CBOE S&P 500 Implied Correlation Index over the last decade. The index measures the correlation between options on the total S&P 500 and the cap-weighted multiple of the options on the stocks which comprise the index.

However, Mr. Burry’s warning was not without merit. As ETF’s and passive funds expand their ownership of the underlying securities of an index, especially of some illiquid and hard to value securities, they also increase the risk that large-scale redemptions could force selling into a dry market. In regard to this sell-off Burry admits that, “…I just don’t know what the timeline will be.” As passive investments continue to grow, the active managers who believe they can identify this timeline stand to profit accordingly.