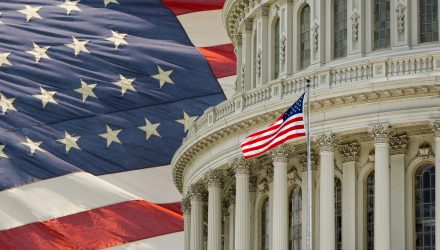 Investing through Market and Political Uncertainty

In the face of economic and political uncertainty, investors’ portfolios are facing three significant risks to their financial plans.

With the Fed taking a pause on additional monetary stimulus, political and fiscal policy disagreement, and a critical election looming, investors need an investment solution to help keep them invested, calm their fears, and boost their confidence in their financial plans and futures

The markets have been propped up for over a decade by Federal Reserve intervention, namely rate reductions and quantitative easing. The relationship between the Fed and the markets has been a growing risk for a while now. In 2018, the Fed increased rates 4 times only for the markets to throw a tantrum. Then Fed responded to pacify the markets with a pivot towards renewed rate-reductions.

The COVID-19 recovery was initially fueled by massive Fed policy and a historic fiscal stimulus response. Now, however, the Fed has no fuel left. On September 16th, FOMC Chairman Jerome Powell announced a halt to further rate reductions and indicated rates will likely be held near zero well into 2023. While the Fed maintained its planned purchases of US Treasuries and mortgage-backed securities, no additional asset purchases or QE plan adjustments were announced. With the Fed taking a pause on further actions, how will the US equity market maintain its rally from March lows earlier this year?

While the Fed can buy assets to provide some market stability, it won’t necessarily help mid to small business facing more layoffs/closures with reduced consumer activity. Federal Reserve Chair, Jerome Powell, already signaled their maxed efforts in helping the economy and urged for more spending to alleviate the pressure on small business and high unemployment.

But will Washington do anything about it?

Wall Street and Main Street now shift focus to fiscal policy support. With political divisiveness and a Supreme Court vacancy, it will be a miracle if Washington will push anything through to help small/medium size businesses, consumers, or the economy.

With the temporary extra Federal jobless benefits running out over two months ago and the jobs recovery stalling, the political stalemate over a new round of stimulus threatens to undercut economic recovery. Additional stimulus is likely needed to keep the equity market moving higher.

Yet negotiations have been tense with fundamental disagreements from either party as to the size and scope of the spending and recipients. An added distraction has been the fight over the Supreme Court vacancy. On October 6th, President Trump announced the White House is calling off stimulus negotiations until after the election.

It will be difficult for markets to rally with no stimulus bill encouraging and moving consumer confidence into action.

We’re also seeing a higher risk of recession, at 30% to 35%, with an unemployment rate 3x larger than the 5-year historic average pre-crisis. It’s evident from the recent jobs report that job growth is losing its momentum and, without government support, may reverse.  With about 60% of closed businesses stating they’ll remain permanently closed, economic recovery is looking less stable.

Historically, elections don’t significantly move markets over the long term, but they do make a lot of noise in the moment. However, this election cycle is introducing unknown territory for the markets and investors.

The two political parties seek voter support from either end of perhaps the largest, most polarized divide in 60 years. Each side offers very different visions of the future and prescriptions for the nation, from COVID-9 policy responses, tax policies, and spending policies, to Constitutional and social justice issues. While markets don’t like uncertainty, the sheer disparity in platforms ratchets up the uncertainty and potential for volatility.

While most investors may be able adapt to either a Biden or Trump presidency, another variable causing concern around the 2020 election is when the winner will be announced and whether the transition will be a smooth one. With all the distrust around mail in voting, the loser of this election may not concede easily. Nothing less than a smooth and swift outcome will keep markets relatively calm. This outcome seems less likely with each passing day. How will this play out in the markets?

Every day, articles are published making predictions, often contradicting each other, about what can happen and how the markets will or won’t react. The reality is, we don’t know what will happen. What we do know is more volatility as uncertainty mounts. Investors are in danger of reacting to the bumpy ride ahead while they wait for government guidance.

However, Washington likely won’t step in until absolutely necessary. Historically, they won’t be concerned enough to step in unless there is a down +5% day on the S&P 500. 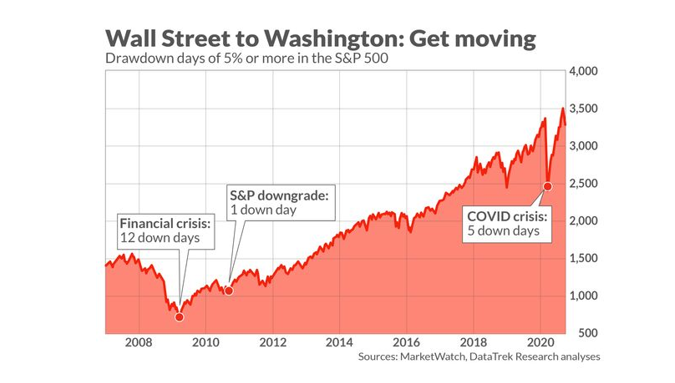 Stocks may fall more than investors are willing to handle. Whether or not they can withstand the pain remains to be seen, but if behavioral finance has taught us anything it’s that investors don’t like losing money.

With rapid recoveries and rallies and deeper sell-offs, timing the market or picking stocks can prove hazardous. Investors depending on protection from bonds may be in for a rude awakening. A stalled jobs recovery and/or prolonged recession may lead to defaults, triggering issues within higher-yield, but less credit worthy bond holdings. While everyone is waiting and hoping for stimulus to inject life into the markets, it could be deadly to the long end of the bond market.

Hedged equity may provide investors with a solution to dampen volatility and remain invested through these uncertain, emotional-charged times.

Step Forward in Confidence by Smoothing the Ride

Market and political uncertainty are adding more drama to an already exhausting and volatile year.

Investing in hedged assets is one way investors can control portfolio volatility without having to exit the markets.

If your clients are concerned with the uncertainty of a catastrophic loss derailing their investment goals, or if volatility may shake their ability to stick to your well-laid plans, then consider utilizing hedged equity within those clients’ portfolios.