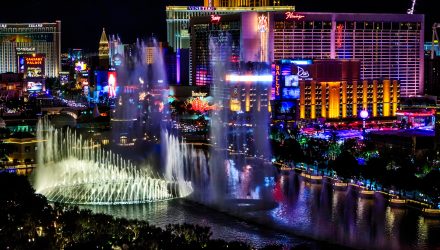 How Much Is Enough?

At a party given by a billionaire on Shelter Island, the late Kurt Vonnegut informs his pal, author Joseph Heller, that their host, a hedge fund manager, had made more money in a single day than Heller had earned from his wildly popular novel, Catch-22, over its whole history. Heller responds, “Yes, but I have something he will never have – enough.”
~John Bogle, Don’t Count on It

I recently had my own silly battle with the question regarding how much is enough. Earlier this year, I attended a conference in Las Vegas. As I prepared for the trip, I decided that outside of my professional objectives, my goal was to come away with a good gambling story. I thought about what constituted my definition of a “good story” for a bit and settled on “winning $1,000.” Though it wouldn’t be a good story for me, losing $1,000 could also still be a pretty interesting story if I did it right. Since my gambling experience was/is close to nothing, I settled on a simple strategy. I’d wager a single roulette bet of $1,000 on red. For my fellow novice gamblers, that’s the game where a dealer spins a wheel and a little white ball lands in a colored pocket with a number on it. The odds of the ball landing in a red pocket are slightly under 50%[1].

When I arrived in Las Vegas, I went straight to my hotel, left my bags in my room, and marched down to an ATM on the casino floor. My first setback was learning that my ATM withdrawal limit was $500 per day. “Never mind,” I thought, “I’ll just have to win twice in order to reach my $1,000 goal.” Unfortunately, now my odds had gone down from about 1 in 2, to 1 in 4.

Un-phased, I made my way over to the nearest roulette table and placed my five $100 bills on the table in exchange for one $500 chip. Without a thought, I placed my single chip on red. I then watched the dealer sling the little white ball that would determine the fate of my story onto the track above the spinning wheel of red, black, and green numbers. As I watched the ball running around the track, all of a sudden I could feel my heartbeat start to pick up as my body became aware of the risk and opportunity before me. Round and round it went until it dropped onto the wheel and began to bounce along the different colored pockets. Finally, the little ball stopped and settled . . . on Red! In just a few seconds I had gone from one magically colored $500 chip to two magically colored $500 chips. What exhilaration!

I took my new chip and left my lucky $500 chip on red and waited for the dealer to spin that adorable little ball onto the track again. A few moments later, the ball, the author to my perfect story bounced along the pockets until settling on red again! I did it! I won my $1,000 and my story. I gathered my three chips worth $1,500, cashed them in, and went to my room with a small pile of $100 bills to swim in.

Unfortunately for my story, my second night in Vegas found me a little bored. No bother, I had the perfect cure, roulette! Don’t worry, I wasn’t going to do anything imprudent, I only brought $100 down to the casino this time. Now my idea was just to enjoy the night by making small $5 bets on one number at a time. Specifically, my lucky number two. Predictably, I left the floor after about 30 minutes without my $100 bill. “Oh well,” I thought, “I had fun, and I’m still up $900.”

It wasn’t until the morning of my third day in Vegas that it dawned on me that my loss of $100 the night before was the complete undoing of my goal. I never set out to have fun gambling. I set out to win $1,000 with one spin of the roulette wheel. How had my goal seemingly shifted beneath me? I mulled over my plight all day. By dinner, I came up with the only option to get myself back on track. I was willing to take three last spins of the wheel in an effort to get back to my $1,000.

After dinner, I headed back to the casino floor, ready for my story to come to an end. I bet $100 on red and won. Luckily for me, there was no day 4 in Vegas and I finally departed with my goal of $1,000 and my tainted story.

The point of all this isn’t to illustrate how gambling addicts are created. It’s to point out that no matter how much I thought of myself as a rational, calculating person, I am prone to the some of the same irrational behaviors and emotional biases as any other human being. I had a clear goal, but was seduced away from it by some internal force. I couldn’t see how much was enough even when “enough” had been clearly articulated only one day prior. Ultimately, I had a great time, but the experience clearly demonstrated to me some of my own behavioral shortcomings. Fortunately for me, it all took place while the stakes were comparatively low. It can be much harder to stay anchored to goals over long time horizons, especially when so many variables can change day to day.