Anyone who has ever driven a golf cart immediately realizes it is different than driving a car. Golf carts don’t glide, they slow the minute you lift your foot from the accelerator. Golf carts also tend to have ‘hair-trigger’ brakes, where the lightest pressure can send its passengers through the windshield. Because they are so different than cars, they can take a little getting used to.

The difference between golf carts and cars is a little like the difference between the economies of today and the economies of yesteryear. Today’s economies don’t glide like they used to, in fact they seem to slow the minute monetary or fiscal stimulus is removed. Their brakes also seem to be more responsive than ever. Take the last twelve months for example; in the US the Fed’s decision to raise rates to a mere 2.25% nearly put US investors through the windshield in the fourth quarter of 2018.  Economically, the impact of slowing stimulus has been even worse overseas. Economies, particularly those in Europe and Japan, have been moving dangerously close to recessionary levels from their central banks simply removing their foot from the accelerator.  There are multiple causes for the greater responsiveness of global economies; however, there are three drivers that we believe may be the greatest contributors.

Over the last fifty years the world has benefited from three important tailwinds: Demographics, declining interest rates, and increased household leverage. These three tailwinds have provided a steady source of organic growth that has been relatively independent of the overall economic cycle. These three tailwinds provided a more self-sustaining economic trajectory, in our view, allowing economies to ‘glide’ once they were stimulated. Likewise, we believe with the three powerful tailwinds, governments and central bankers did not have to be so precise when they wanted to slow the economy because the brakes were more forgiving.  Unfortunately, the three tailwinds have recently become headwinds, that we think may impact the investment climate for many years to come.

Every year from 1967 to 2014, a greater percentage of the global population entered the work force (ages 15 to 64) than exited. A growing work force is an important component of economic growth, because ‘workers’ earn and spend more than those that are not working. 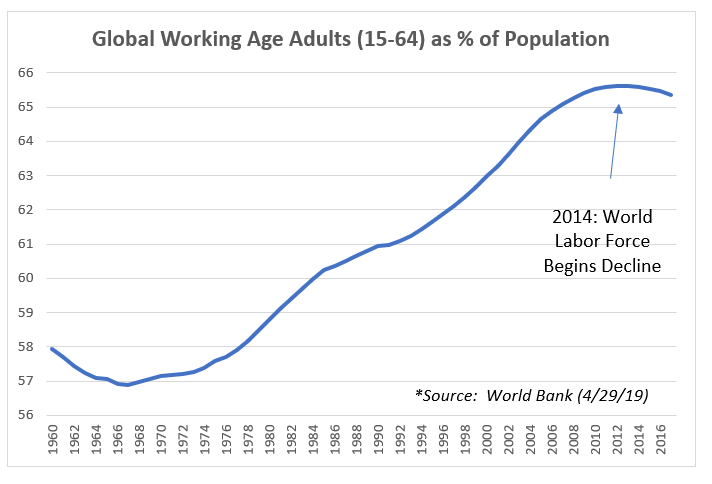 However, in 2014, that all changed when workers around the world began ‘aging out’ of the 15 to 64-year-old population, turning demographics into a headwind. The aging of the workforce has been most acute in the developed world outside the US.  When workers leave the workforce, they stop receiving a paycheck and adjust their spending habits accordingly.

Declining interest rates for the past 40 years provided a natural tailwind for growth throughout much of the developed world. In the left chart we show US interest rates, but this phenomenon has also occurred overseas. 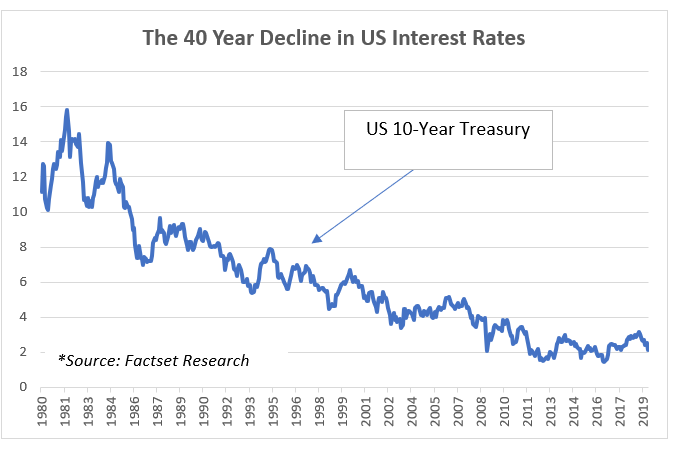 Source: Factset, RiverFront. Past performance is no guarantee of future results.

Interest rates in much of the developed world are currently close to their lowest levels since World War II. Central Bank balance sheets have also already expanded to levels not seen since the Great Depression. With negative interest rates in Germany and Japan and exceptionally low rates in the other developed countries, the opportunity for further declines in rates is limited.

Since 1983, low interest rates have allowed households in the US to take on more debt, thereby increasing leverage. When households take on debt, purchases of goods and services are amplified because consumers are spending more than they make. This provided an additional boost to consumption and ultimately economic growth. However, household debt as a percentage of disposable personal income peaked in 2007 in the US and has actually declined from roughly over 120% to levels back below 100% (See Chart). This trend has also been mirrored in large European economies such as the UK and Germany.  Declining household debt is an admirable long-term goal from a personal finance perspective, but it is a clear detractor from global economic growth.

IMPLICATIONS OF A MORE RESPONSIVE ECONOMY

We believe controlling today’s global economies is more like driving a golf cart than a car.  They may accelerate similarly, but due to the headwinds of aging demographics, declining interest rates and deleveraging the economy no longer ‘glides’ like it used to and can be especially sensitive to braking.   More responsive economies mean that investors need to pay more attention to monetary and fiscal policy.  It also means that policy makers (legislators and central bankers) need to recognize that the vehicles they are driving may be different than the vehicles they have trained on. 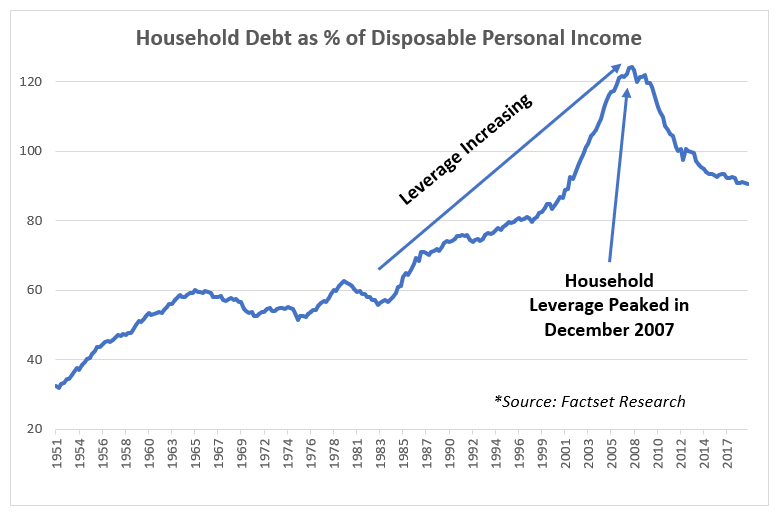 Economies where these headwinds are the strongest, like those in Japan and Europe, appear to now require steady stimulus to keep any economic momentum going. Even slight changes in monetary stimulus like ceasing quantitative easing (QE) in Europe or slowing asset purchases in Japan can have far larger impacts than in the past. Legislative policy can also have amplified economic consequences and we worry that the impact of higher tariffs (US) or higher value-added-taxes (Japan) may be underestimated.

This is one of the reasons our equity/bond allocations are neutral to our composite benchmarks, and we are underweight international stocks, despite their attractive valuation. Over the long-term, we feel confident that ‘necessity’ will be the ‘mother of invention’ and policy-makers will begin to understand the new dynamics they face and re-calibrate their driving style by altering the pace and magnitude of new policies and their implementations.

When referring to portfolio asset class weightings and shifts, we are referring to Advantage portfolios. For more information on our other portfolios, please visit our website.

When referring to being “overweight” or “underweight” relative to a market or asset class, RiverFront is referring to our current portfolios’ weightings compared the composite benchmarks for each portfolio. Composite and benchmark definitions can be found on our website.