You are at:Home»ETF Strategist Channel»Europe: Stocks Making Headway Even in a Volatile Market 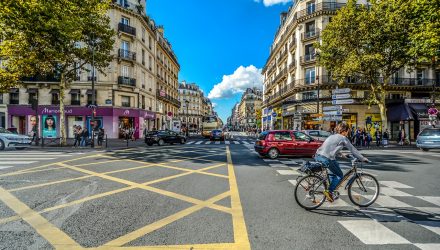 Europe: Stocks Making Headway Even in a Volatile Market

Since February, concerns over inflation in the U.S., protectionist trade policy, softening economic data, and declining tech valuations have taken the excesses out of global market sentiment, a welcome development in our view. Given our portfolio positioning, one interesting trend occuring underneath the surface is the improving performance of European equities even amidst the volatility.

Not only has the Eurozone’s relative strength improved markedly since early March (see chart below), but local European stocks have posted positive absolute returns in contrast to the negative returns posted by U.S. indices like the Dow Jones Industrial Average, S&P 500, and Nasdaq Composite.

Why European Stocks Are Proving Resilient

Europe doesn’t appear to be in the gun-sights of U.S. trade hawks: A couple months ago, U.S. trade representatives got into a rather public spat over terms of trade with the European Union. Since then, however, the U.S.’s bark has been  worse than its bite. For example, just  last week the Trump Administration extended the exemption for EU steel and aluminum tariffs for another 30 days.

Past performance is no guarantee of future results. Not indicative of RiverFront portfolio performance. You cannot invest directly in an index.

Clearly the administration is more focued on equalizing trade terms with China, whom it views (rightfully so, in our opinion) as the most egregious trade offender. While trade terms between the EU and the U.S. on certain items (for instance, automobiles) perhaps deserve renegotiation, in general bilateral tariff rates between the EU and the U.S. are similar. We believe this suggests that trade issues with the EU are limited and not as pervasive as they are with China. For this reason we think the market has it right when it did not punish Eurozone stocks during the ‘protectionist panic’ period (after the March 8 tariff announcements).

Rising long-term rates are good for the financial-heavy European indices: One of the major differences between U.S. and European indices is the relative lack of tech exposure in Europe; while technology makes up ~25% of the S&P 500, it’s only roughly a fifth of that weighting in Europe. Instead, financials are the largest sector in Europe, representing over 20% of the equity market.

This has clearly been a relative negative for Europe over the past few years, as U.S. tech has been a superstar and European financials have struggled through their own version of the U.S. banks’ post-credit crisis woes. However, we think the tide might be turning in Europe’s favor. Similar to the dynamic in the U.S., longer-term government bond yields in the Eurozone are starting to rise. As we wrote about in our 2017 Outlook, there has historically been a strong positive correlation between the direction of the German bund yield and the strength of Eurozone equities relative to the U.S. (see chart below).

Past performance is no guarantee of future results. Not indicative of RiverFront portfolio performance. You cannot invest directly in an index.

We suspect a major reason is the financials-heavy weighting in the Eurozone index; bank stocks tend to like rising long-term interest rates, as rising rates positively impact a bank’s profitability. Bank stocks particularly enjoy rising rates if the reason that rates are rising is because the economy is growing – the situation that Europe now finds itself.

It’s also worth noting that European banks, similar to U.S. banks from 2012-2013, are now through the worst of their regulatory scrutiny, in our view. Bank balance sheets have been shored up and capital adequacy has been improved, which has meaningfully reduced the threat of insolvency. This can be seen in the graph below left, which compares current credit default swap (CDS) spreads on Europe’s largest banks relative to the highs over the last three years. Credit default swaps are securities an investor can purchase to protect themselves against a default.  Additionally, many European banks are starting to reinstate and even in some instances grow dividends. Given that many macroeconomic aspects of Europe are roughly 3-4 years behind the U.S. in our opinion, the next few years may be a surprisingly good time for European bank equities – just as 2012-2015 was for the U.S. banks, 4 years after the end of the U.S. credit crisis.

ECB still accommodative; positive for equities: the European Central Bank (ECB) meeting in late April and last week’s core inflation data out of the Eurozone both suggest to us that the ECB has no choice right now but to continue running an extraordinarily accommodative monetary policy. Core inflation in April in the Eurozone surprised to the downside, from 1.0% in March to 0.7% in April, its lowest level in over a year. While seasonal effects likely had something to do with the miss, we still think it helps underline that core inflation trends in the Eurozone are well below the ECB’s target of 2%. We think there are many reasons for the low levels of inflation.  One of the most important is the fact that there is meaningful spare capacity in the region’s economy which is keeping wage growth subdued. We suspect that, while the ECB may formally end QE at some point in 2018, it will be multiple years before they will raise short-term interest rates. We think this bodes well for risk assets in Europe.

Equity yields still attractive relative to bond yields in Europe: There are many different ways to gauge relative valuation of international to U.S. stocks; one simple way is to compare equity dividend yields of a particular region to that region’s risk-free bond yield. In our Chart of the Week below, we show Eurozone dividend yields minus 10-year government bond yields. Thus stockholders are now receiving higher cash flow than bondholders, which is historically unusual. We think this will result in a rotation by investors out of European bonds into yield-bearing equities. In contrast, U.S. equities offer 60 basis points less yield than the U.S. 10-year treasury.

CHART OF THE WEEK: DIVIDENDS IN EUROPE WELL ABOVE BOND YIELDS

Charts shown for illustrative purposes only. Past performance is no guarantee of future results. It is not possible to invest directly in an index.