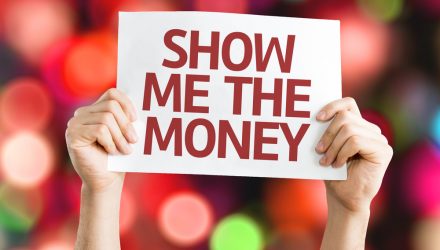 ETFs, Show Me the Money

ETFs are an amazing tool for investors due to the many client alignment factors like tax efficiency, liquidity and transparency. That being said, the attribute that gets the most attention is the “fee,” because the ETF moniker has become synonymous with “low cost.”  The validity of the ETF low cost halo effect is often true, but there are many exceptions. In this week’s ETF Think Tank research note, we dive into the details behind the $8 billion in revenue generated by the ETF industry.

The value propositions for the first wave of ETFs was exposure and liquidity. Then, there was the accidental, yet fortunate discovery of the tax efficiency. Ralph Lehman does a great job of recounting the birth of the ETF industry in his book, The Elusive Trade. The concept of low cost was an existing value proposition linked to index investing, not necessarily ETF investing. The convergence of the “Bogle” mindset with other significant upgrades the ETF structure provided investment funds coalesced around fees in the early 2010s. Fees became a selling point due to the simplicity of the story. By offering the same investment with a lower fee, the implied return would be higher. The marketing pitch has always been that lower fee structures create alpha on higher fee products. Many other factors like spreads, execution and commissions will affect the outcome, but it became clear that the ETF consumers identified with implied benefit of low fees.

WAR: What is it Good For?

As time progressed, the low fee ETF value propositions moved from comparisons with mutual funds to comparisons with other ETFs. This was the beginning of the “fee wars.”  This war has made the ETF industry brutally competitive, but is good for investors. Today, beta is basically free, and most major ETF sponsors have a core beta line up that is almost free. The ETF fee war has moved to higher active share thematic funds, but the cuts and asset turnover has been way less dramatic. The current fee breakdowns are highlighted in the following charts: 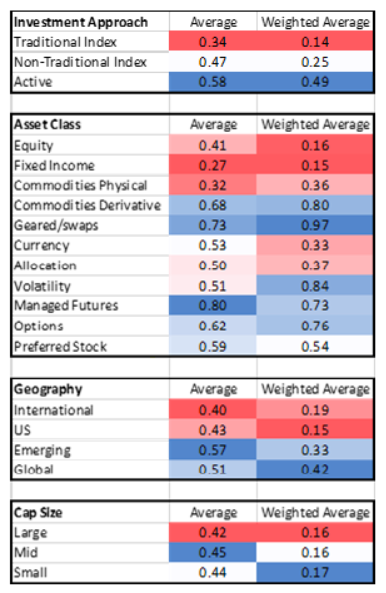 The average weighted fees for beta are now only 0.14%, while active is still about half a percent. 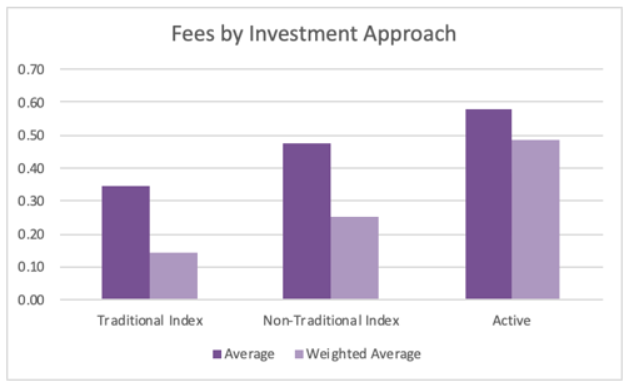 Low fees were not the original value proposition of the ETF structure, but have become the obvious selling point. As the beta fee war comes to an end, will investors look for new fee wars, or embrace the many other upgrades that ETFs offer investors?