You are at:Home»ETF Strategist Channel»ESG’s Growth: The SMART BETa on the Benefits of Transparency

ESG’s Growth: The SMART BETa on the Benefits of Transparency

Bring your own assets “BYOA” and help define an ETF category or just wait for the Larry Fink – Blackrock version? ESG AUM topped $16.145 billion in 2019, up from $5.817 billion in 2018 and just $2.982 billion in 2017. As a sponsor, Blackrock iShares currently leads the category with $9.2 billion or 60% of the AUM and now Larry Fink (see Letter) with a sense of urgency wants to really “rev up the engine” by doubling the number of sustainability-focused ETFs it offers. Over the next few years the goal is to increase their fund offerings to 150. The category now has 65 choices with the top 10 and 20 ETFs representing 77% and 88% of the AUM. This is an exciting trend in the ETF market because, unlike many ETF categories, this trend has the potential to expand choices across asset classes. And yes, factors play a “smart” role in driving “alpha”, but the definition of principal and principles has an equally significant role. For this reason, it is possible that the number of choices in this category may grow exponentially over the next decade, but investors will really need to look under the hood to make sure that their principal and principles are properly aligned with their personal mission. (See ETF Edge Report for further insights about the debate around purity of process.)

BYOA, Define a Philosophy and Inspire Investors by Example

I don’t know the story behind the decision made by Ilmarinen, the $10 billion Finnish pension firm, that seeded two ETFs with $3 billion in 2019, but I would encourage people to visit their website to understand why they did what they did. Simply put, a pension fund, with the responsibility of managing 600,000 people’s retirement money, made the decision to put their money where their mouth was by empowering capital that aligned with their stated mission. The website states:

“Ilmarinen’s strategy for 2019–2021 highlights responsibility, customer focus and personnel experience. Our basic task is to ensure the earnings-related pension cover of our customers. We want to be the most attractive working life partner – responsibly, for you.

In the strategy, our long-term goals are to be one of Finland’s best places to work, offer the best customer experience in the sector and grow profitably and faster than the market. In terms of the ratio of operating expenses to expense loading components and solvency, our goal is to be better than the sector average.

To reach our goals, we will succeed together and boldly reinvent ourselves, we will operate with a focus on customers and promote work ability, grow profitably together with our customers, digitalize customer paths and processes and invest profitably, securely and responsibly.

To achieve our goals, we operate in line with our values: openness, responsibility and co-operation.” 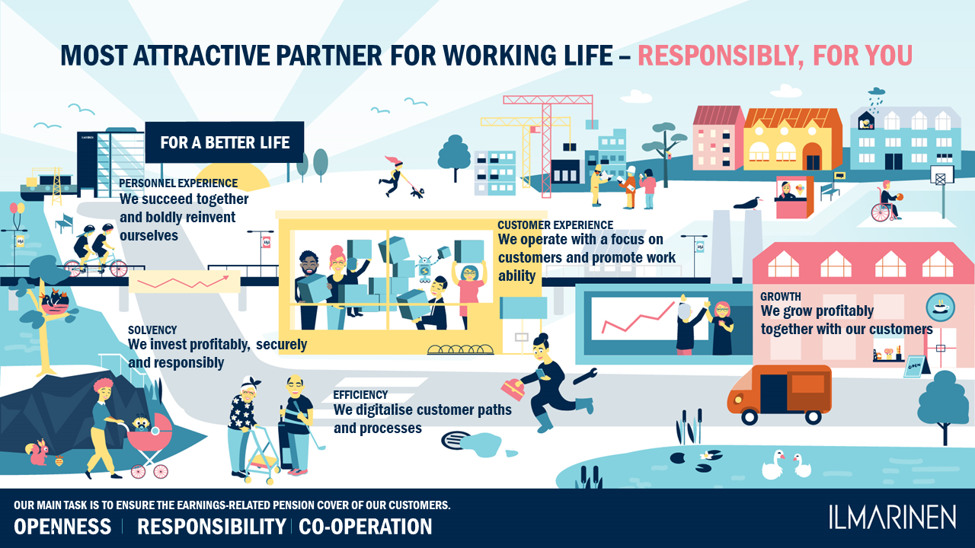 Leading by example and committed capital, I think this institution is stepping up and educating all of us on what they see as “right”. However, that does not mean that ESG has been defined or is consistent with other investor’s definitions. In fact, investors may find the methodology confusing and different from what they think the literal definition is. Nevertheless, this is a natural extension of the evolution of the benefits inherent in the transparent nature of the ETF wrapper. Ironically, this could be part of the AUM solution for “Semi-Transparent ETFs” and the direction of how the ETF wrapper, as a technology, could lead to asset management disruption.

The Ironic Opportunity for Semi-Transparent ETFs

The Semi-Transparent or Non-Transparent ETF wrapper could benefit from other pension and/or insurance companies bringing their own AUM (BYOA) and making statements when they sell the stock of company. The decision to sell stock because the company is no longer meeting a specific philosophical standard makes a large statement to millions of holders of that pension or insurance company. Of course, a fully transparent fund could do the same thing, but with the Non-Transparent wrapper the data release could be more impactful as it is released with a statement.

With some irony about the definition of SMART BETa I think this could be part of the evolution of a new meaning of SMART BETa. Rather than SMART BETa being defined by a “Smart Bet on alpha,” enterprises may take it to a new level and define it as “Companies, if you want access to our capital, be aligned with our mission and philosophy.” (WOW – talk about confusion!!!)

The statement made by the Ilmarin pension is meaningful in the context of their 13-F disclosed holdings, as these two ETFs represent their largest position. Splitting the two holdings up between two different issuers also makes sense since it may have helped on the fee. I suspect that the fee was less of an issue, but from a fiduciary standpoint it is clear that Deutsche Bank’s fee at 10 Bps is the same as the SPY, 5 Bps and 5 to 10 Bps less than the two iShares ETFs (SUSL and DSI). The holdings overlapping between the two ETFs is 100%, but the weighting methodology slightly differs across the 320 stocks, which may lead to some dispersion and slight diversification of returns. Again, while skeptics may wonder why certain companies are owned, looking deeper under the hood may expose the more interesting fact about what is NOT owned. The universe of choice could have begun with benchmarks like Vanguard Total Stock Market (VTI with 1,592 stocks) S&P 500 (SPY/IVV/VO with 506 stocks), the iShares MSCI KLD 400 Social ETF (402). 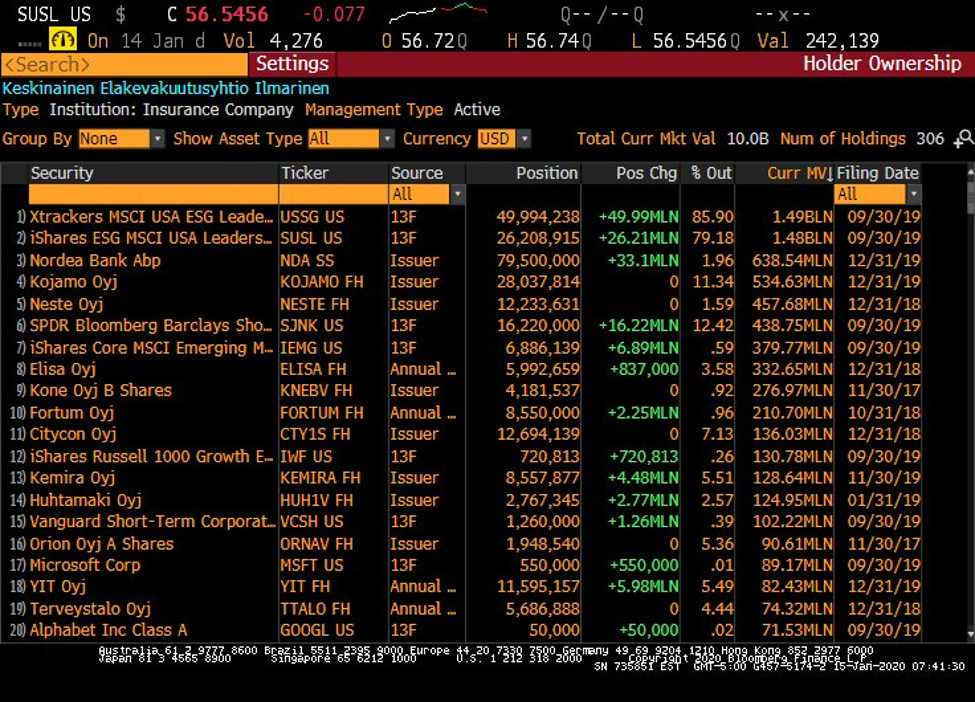 The Deutsche Xtracker ETF (USSG) was launched on May 10, 2019 and from a performance standpoint is off to a slow start versus the iShares ETF (SUSL). But regardless, alpha was generated over similar large cap or S&P type ETFs, and more importantly, the “A or a” in SMART BETa has helped to break new ground in providing access for investors to their cultural philosophy of investing. Thank you, Finnish people, for your leadership. With your transparent mission, ESG will grow and social activism will flourish. 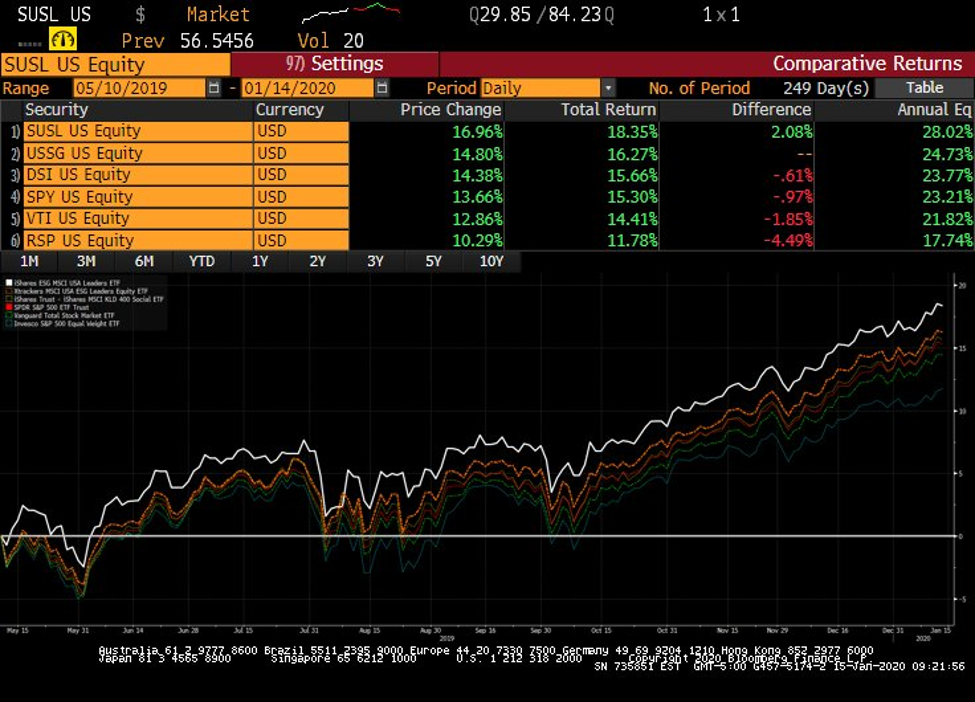 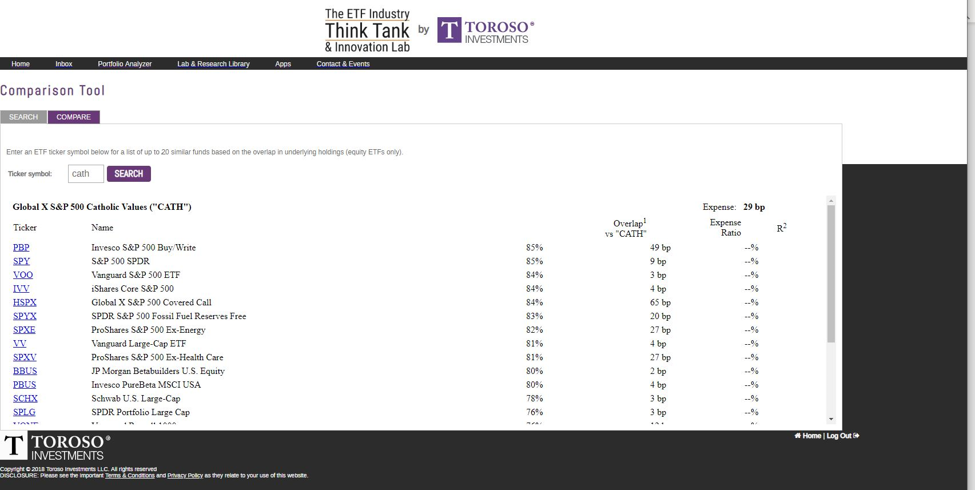 Yes, there are ESG ETFs that are flawed and questionable. For years, I have wondered how the Global X S&P 500 Catholic Values ETF (CATH) is aligned with Catholicism, but with $312 million in AUM and a relatively broad base of investors, it would seem that others disagree. Again, I think it is best to look at what has been excluded from the 455 holdings. But regardless, the active share is surprisingly very small at only 15%, so the question remains as to whose ESG philosophies are really being met. Then again, investing, as Warren Buffet would say, is a voting mechanism.

ESG will remain an important ETF focus over the next decade. On that topic, in 2017, the State Street SPDR Gender Diversity Index (SHE) led the way in victories by sweeping 5 Award categories: Best New ETF, Most Innovative ETF, Best New US Equity ETF, the Thematic ETF Award, and the People’s Choice Award. Unfortunately, such enthusiasm has not been well rewarded by alpha. Since inception SHE is up 62.15%, versus RSP at 65.3 and SPY of 78.47%. In July 2019, SHE had AUM of about $400M, but SHE’s underperformance was recognized by advocates like the California State Teachers. Today, the AUM is only around $143 million. Investors, pushing the mission of diversity and women’s rights to equal pay and equal opportunity, may find solace in the performance of the Impact Shares YWCA Women’s Empowerment ETF (WOMN). Noteworthy is the fact that these two ETFs, which are trying to provide the same access point, have only an 18% overlap in their holdings, and the return alpha that was achieved by WOMN came from its 8% larger position in technology over SHE. 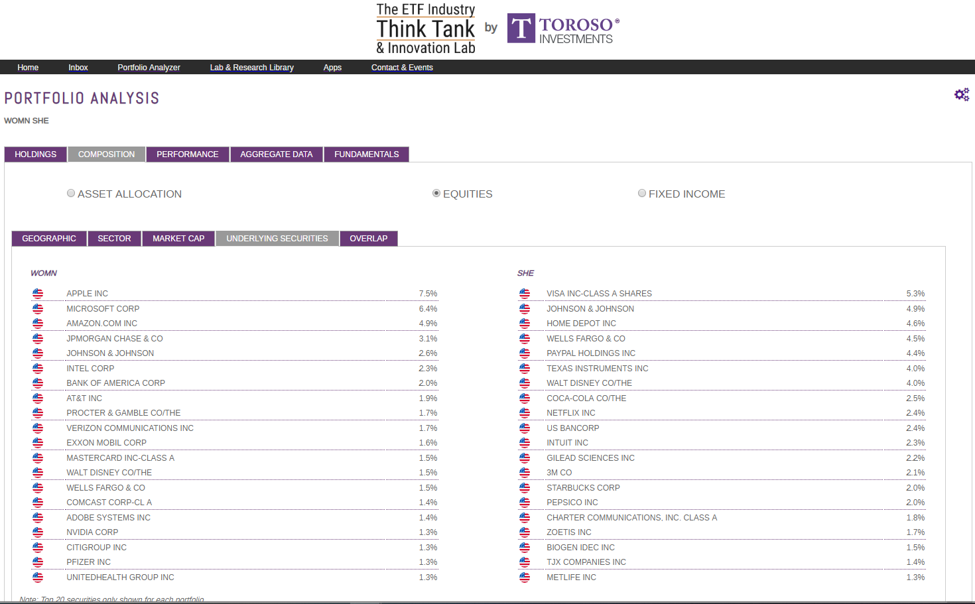 There is a difference between defining an ETF as “ESG focused” and tilting a methodology so it incorporates ESG. As it evolves, this definition will require a great deal of education to gain mindshare and dollars, but I can see a better world where ESG AUM was $200 billion. For now, however, here is a list of the top 20 ESG ETFs. A complete list of the 65 ETFs is available upon request. 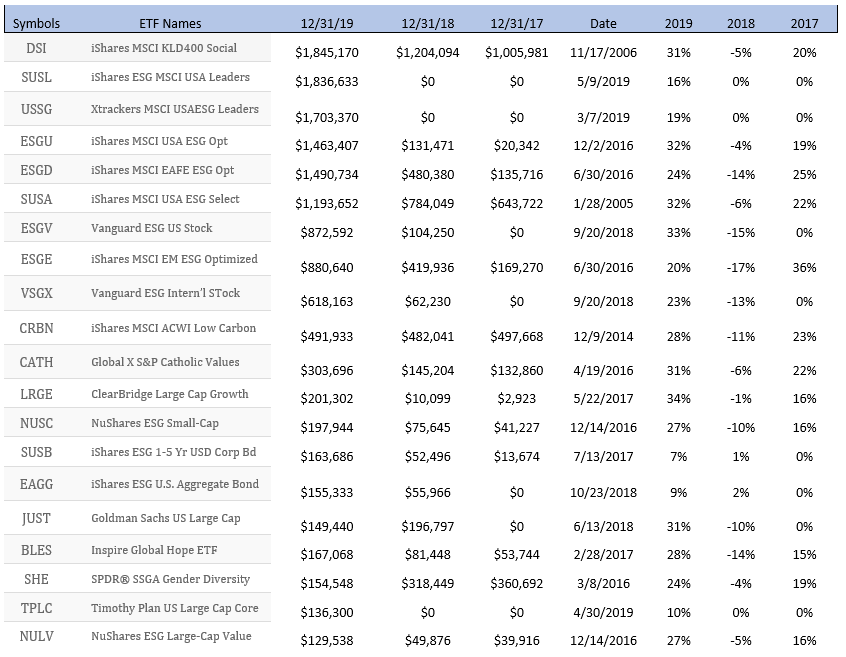 ESG is going to be a driver for innovation in the ETF revolution. What works for some investors may not work for others, but I tip my hat to those who achieve both A and a. Going green, according to some, can be both good for the pocket book as well as to the benefit of society. However, even with good intentions, will one firm define the mission according to everyone’s philosophies and definition.