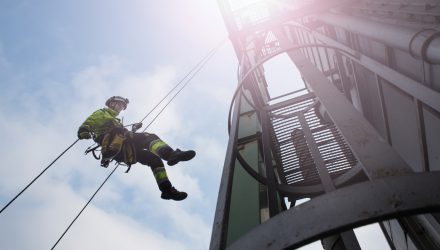 While global economic fundamentals remain solid, we continue to expect volatility as the markets adjust to slower economic growth compared to the end of 2017, lower corporate revenue growth, and lower earnings growth.

Global economic growth is likely to continue, but at a slower pace than we saw at the end of last year. For example, the J.P. Morgan Global Manufacturing & Services PMI suggests that the global economies continue to expand, but the rate of expansion is slower than at the end of 2017. Part of this slowdown is related to the euro zone economy, which downshifted from their highest growth rate in 12 years as measured in January 2018. 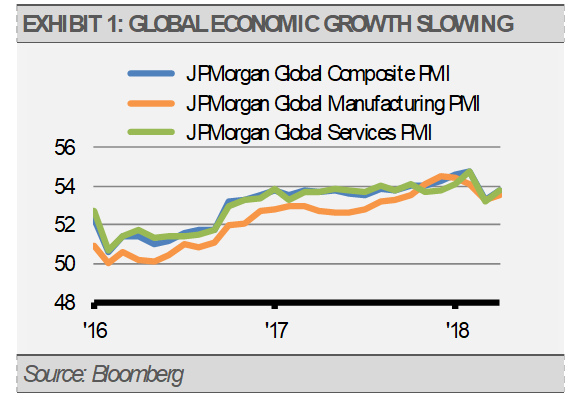 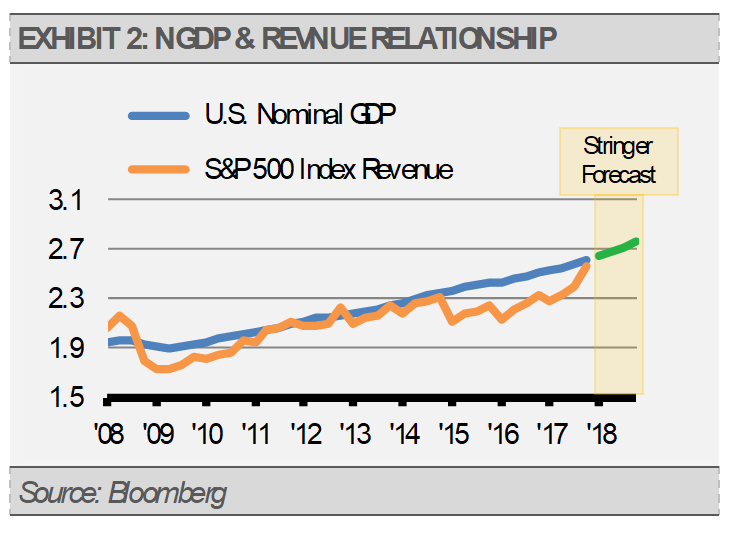 While the rate of corporate revenue growth may overshoot its long-term potential as measured by NGDP for short periods of time, we expect that the increased headwinds of slower global economic growth will restrain the revenue growth rate for American corporations. Combined with increased wage pressure and inflation, these headwinds will likely squeeze margins and put a ceiling on earnings growth. Though year-over-year earnings growth may decline from the 22% expected in Q1 2018, growth in corporate earnings still supports higher equity prices from here, however, we expect that gains will be harder to achieve.

In fact, we expect that the strengthening U.S. dollar will reduce currency hedging costs and foreign demand for U.S. debt will increase, which puts additional pressure on long-term yields to decline. Meanwhile, the Fed seems intent on raising interest rates each quarter for the remainder of 2018 and into 2019, which may serve to limit inflationary pressure. Stable or decreasing long-term interest rates, combined with rising short-term rates, should cause the yield curve to continue to flatten, but we expect the Fed to stop before they choke off liquidity and invert the yield curve. An inverted yield curve has been a consistent indicator of a looming recession and equity market decline. Our base-case scenario is that the Fed will not make this mistake.

In this environment, stock market prices can grind higher and we think that our favored investment areas will benefit. Defensive equity sectors, such as REITs and utilities, can perform well as long-term interest rates stabilize or decline. Additionally, certain alternative investment strategies, such as merger-arbitrage, can help mitigate equity market volatility. Lastly, we think that preferred stocks, MLPs, floating rate fixed income, as well as intermediate and longer duration bonds offer an attractive source of current yield.