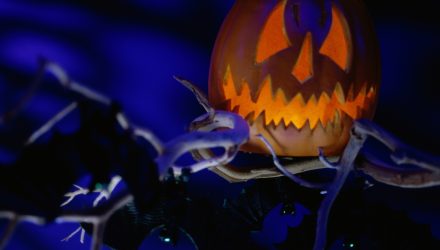 Halloween is upon us…a season for ghosts, goblins, and the terrors of volatile equity markets. This October is different from last year, as many markets outside of the US are now officially in ‘correction’ territory. The poster child is emerging market (EM) equities, which are now in a bear market after losing close to a quarter of their value from the peak in early February. In August, RiverFront’s risk process eliminated emerging markets exposure from our shorter-time horizon asset allocation portfolios and trimmed back to a generally ‘neutral’ stance relative to our baseline benchmarks in our longer-horizon portfolios.

Given EM’s extreme ‘oversold’ condition (see chart, below) and the undervalued nature of most EM currencies, we think it’s likely that EM has a short-term bounce. Outside of a near-term snapback, we arrive at a balanced view on EM because of compelling yet opposing factors. The positives: attractive valuations on both equities and currencies combines with near-term and long-term earnings growth potential. The negatives: sensitivity to a rising US dollar and interest rates, as well as Chinese economic and trade concerns. The negative story is further compounded by an ugly technical picture in both EM stocks and currencies. This suggests to us that our ‘neutral’ stance is prudent.

WE BELIEVE LONG-TERM INVESTORS SHOULD MAINTAIN SOME EXPOSURE TO EMERGING MARKETS:

On a historical time-series basis, we believe EM equities are now approaching low levels of valuation. At 11x 12-month forward earnings, EM now trades at over a 5 multiple point gap to the US – close to the largest gap since before the Global Financial Crisis in 2008 (see valuation charts, next page). However, EM did trade at a larger gap during and immediately after the ‘Asian Contagion’ of the late 1990’s, so there is precedent for EM to go lower should true contagion occur. Contagion risk is perhaps overstated here; we’d note that most of the larger countries in EM, especially those in Asia like Korea, Taiwan and even China, are in much better financial shape than during the late 90’s and early 00’s and also possess more foreign currency reserves. Thus, we believe that acute country debt issues will mostly be resigned to the smaller, more inconsequential parts of EM like Turkey and Argentina.  Perhaps even more so than the stocks, we believe most EM currencies are now quite cheap relative to the US Dollar on a Purchasing Power Parity (PPP) basis as well as other methods of valuation. Real (inflation-adjusted) interest rates in most areas outside of Turkey are now positive as well, adding support to EM currency. 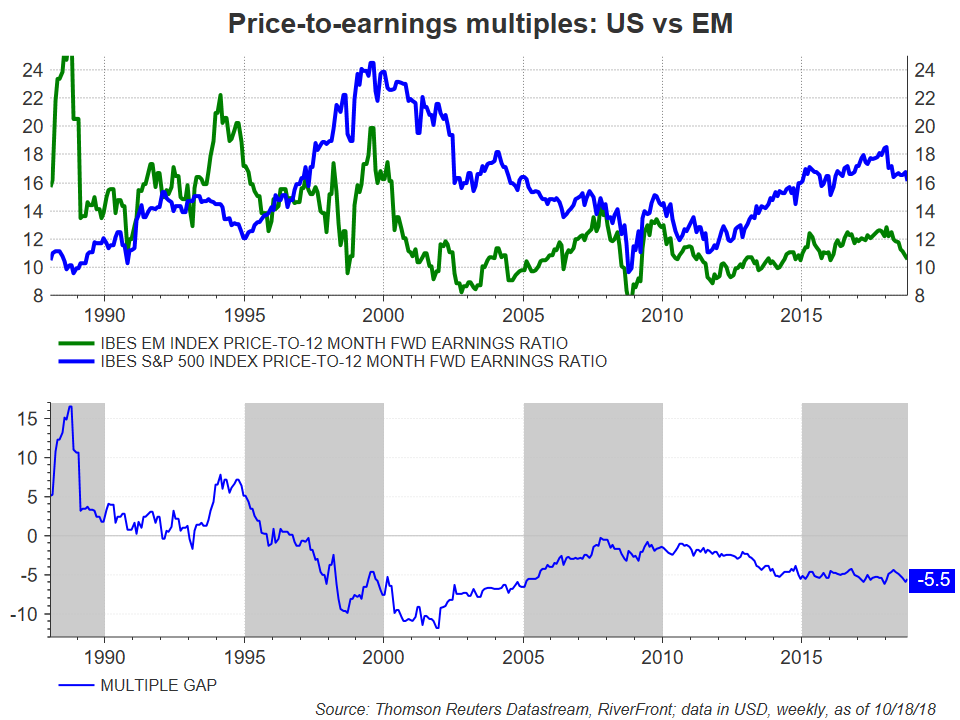 Source: Thomson Reuters Datastream, I/B/E/S, RiverFront; data in USD, weekly, as of 10/19/18. Past performance is no guarantee of future results. You cannot invest directly in an index. Not indicative of RiverFront performance.

Lastly, due to trade issues and some economic softness of their own making, China is likely in our opinion to continue to ease policy to offset potential economic disruption. For example, China has now lowered the Reserve Requirement Ratio for financial companies (RRR) again and released details of a personal tax cut for households over the weekend. Verbal jawboning is also apparent, with President Xi promising ‘unwavering support’ for non-state firms (Source: Factset Data Systems).

We would note that, despite negative sentiment since Q1 of this year, expected earnings-per-share (EPS) growth in MSCI Emerging Markets index is still in the double digits for both 2018 and 2019. (Source: I/B/E/S, Datastream, RiverFront). While investors are rightfully concerned about the US/China trade dynamic, we believe eventually China will be ‘forced’ to acquiesce to trade demands from the US. This is due to the fact that trade between the West and China is currently not on equal footing and the Chinese are more highly dependent on trade from the West.

SO, WHY NOT OVERWEIGHT EM EQUITIES?:

While we acknowledge that continued increases in US interest rates and the dollar could continue to pose a headwind for EM, our largest concerns on EM center primarily around China. First, China’s economic slowdown is becoming apparent, with the higher-frequency indicators of economic growth that we track continuing to decelerate from 2017 levels. While this slowdown is not nearly as sharp as in 2014-2016, it bears watching; especially if the tariff issues start to negatively impact China. While we acknowledge that China stimulus should help, it remains to be seen whether this can offset the eventual economic impact of trade dislocations.

We don’t see a near-term resolution to the US/China trade dispute. First, the playing field is arguably much less balanced, given the legitimate concerns the US has over intellectual property protection and the level of bilateral tariff rates across a host of goods. Second, the US’s negotiation leverage is arguably stronger today than at points in the future, as China’s economic growth continues to transition towards internal consumption. Third, the US President’s political base for the time being remains energized around ‘tough talk’ with China. This all suggests that, while we are most likely witnessing the ugly opening stages of a long and protracted negotiation process between the US and China, rather than a repeat of 1930’s-style protectionism, resolution is unlikely to be swift. From a technical perspective, time is also needed. The message of the markets is clearly negative as it relates to many commodity prices as well as EM equity trends. Traditionally, commodity prices like metals have been correlated with growth of China and with EM relative strength to US stocks.