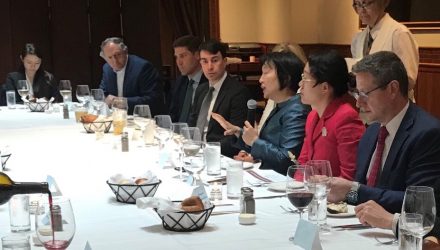 Drilling Deep on Economics and China

Special events are a benefit to membership in the ETF Think Tank, and last week, KraneShares hosted a special dinner for key investors to meet with Dr. Hong Liang, the Chief Economist and Head of Research from China International Capital Corp (CICC).

Her perspective about the trade negotiations with China was constructive and timely given her background and mainland view. She joined CICC in 2008, but previously was the Managing Director, Chief China Economist, and Co-head of Asian Pacific Economic Research over 2003-08.

Prior, she worked at the IMF as an economist from 1998-2003. Dr. Liang obtained her Ph.D. in Economics from Georgetown University in 1998, and her B.A. in International Relations from Peking University in 1991.

• On the economy, she believes that Chinese Policy has pivoted from a deleveraging campaign to monetary and fiscal stimulus driven by the trade war. While monetary easing has potentially slowed beginning in April, she believes that tax cuts will have a positive effect in the second half of 2019. Her base case is for China’s GDP is for growth to be 6.4% in 2019 and accelerate through several catalysts. (urbanization, SOE reform, pension contribution reform). Pension reform, tied to SOE reform, could unleash significant consumer buying.

• Optimism about the flexibility that the Chinese government has with managing through the Trade Wars provided insights about the timeliness of an agreement. In her view, the trade war will accelerate China’s economy, opening up opportunities in agriculture, financial services, and leveling the playing field for private companies relative to SOEs. China has plenty of dry powder if a trade war drags on via monetary and fiscal stimulus. As the second largest economy in the world, a trade war that hurts China hurts the global economy, global multi-nationals, and has a myriad of unintended consequences. Disruption of global supply chains especially in auto manufacturing could have significant repercussions. Ultimately no one likes to be told what to do. Multi-nationals doing business in China could suffer from hard line trade tactics.

• A base case for confidence in the Chinese Stock Market involved: (1) The rise of domestic consumption coming through the rise of pension reform. China’s high savings rate is driven by mandatory pension contributions. There are a multitude of beneficiaries including internet and e-commerce companies. (2) Within the A Shares market, industry leaders are poised to benefit from consumer upgrades which would benefit luxury goods, higher value food companies, and industrials. Pharma and high-end manufacturing were favored sectors as well. (3) Pension reforms which will include raising the equity ownership levels. For instance, China’s social security fund is virtually 100% invested in Chinese Treasuries though this will change.

• Credit is a major concern for some investors, but deleverage or tightening of credit is unlikely. China’s debt issue is by far the biggest misperception as investors fail to look at China’s assets and solely focus on debt. Parallels to Japan running a very high debt/GDP were discussed, but in China’s case sovereign debt flexibility helping the situation remains under appreciated. China has very significant assets that mitigate the threat posed by debt. Thank you Kraneshares for sharing the opportunity with us. Dr. Liang’s articulate views helped to isolate different themes and trends we are focused on in the ETF Think Tank.

Investing By Geography and Country:

There can be some overlap between investing by geography, country, and themes, but at Toroso, we believe that global equity markets move directionally together because of coordinated efforts by policy makers and the globalization of economies today. However, it is the factors that affect the magnitude of the moves. This means that saying China does not matters to a portfolio is a strategy that ignores reality.

With a significant home bias, it is helpful to note that investors currently own ETFs representing $2.94 Trillion targeted at the U.S.; about 76% of the Total $3.85 in Trillion in AUM, and only $278 Billion, or about 7%, of the total is invested in Emerging Markets. This potentially illustrates that most U.S. ETF investors are underappreciating the ETF opportunity.

As per China, included in the emerging markets number is 56 ETFs with about $19.44 Billion. In time, we think this is important because China today is the second largest economy and arguably could be set to become the largest economy. This mean that while the largest ETFs in the space may have the first mover advantage, they may need to adapt their construction and or methodology so that they are aligned with the dynamics of the changing Chinese economy. iShares has two ETFs with the symbols FXI and MCHI which make up about $9 Billion of the $19 Billion.

Curious to note is the fact that Deutsche Bank’s XTrackers Harvest MSCI All China (CN) has the best 5 Year Track record at a positive 76%. Index construction matters a great deal in this area of the ETF market; arguably more than trading volume for those looking to invest for the long term.

Which of the largest China focused ETFs has the least overlap with EEM?

Which China ETF is less expensive than EEM and has a negative Smart Cost Calculation?

Thank you for reading!